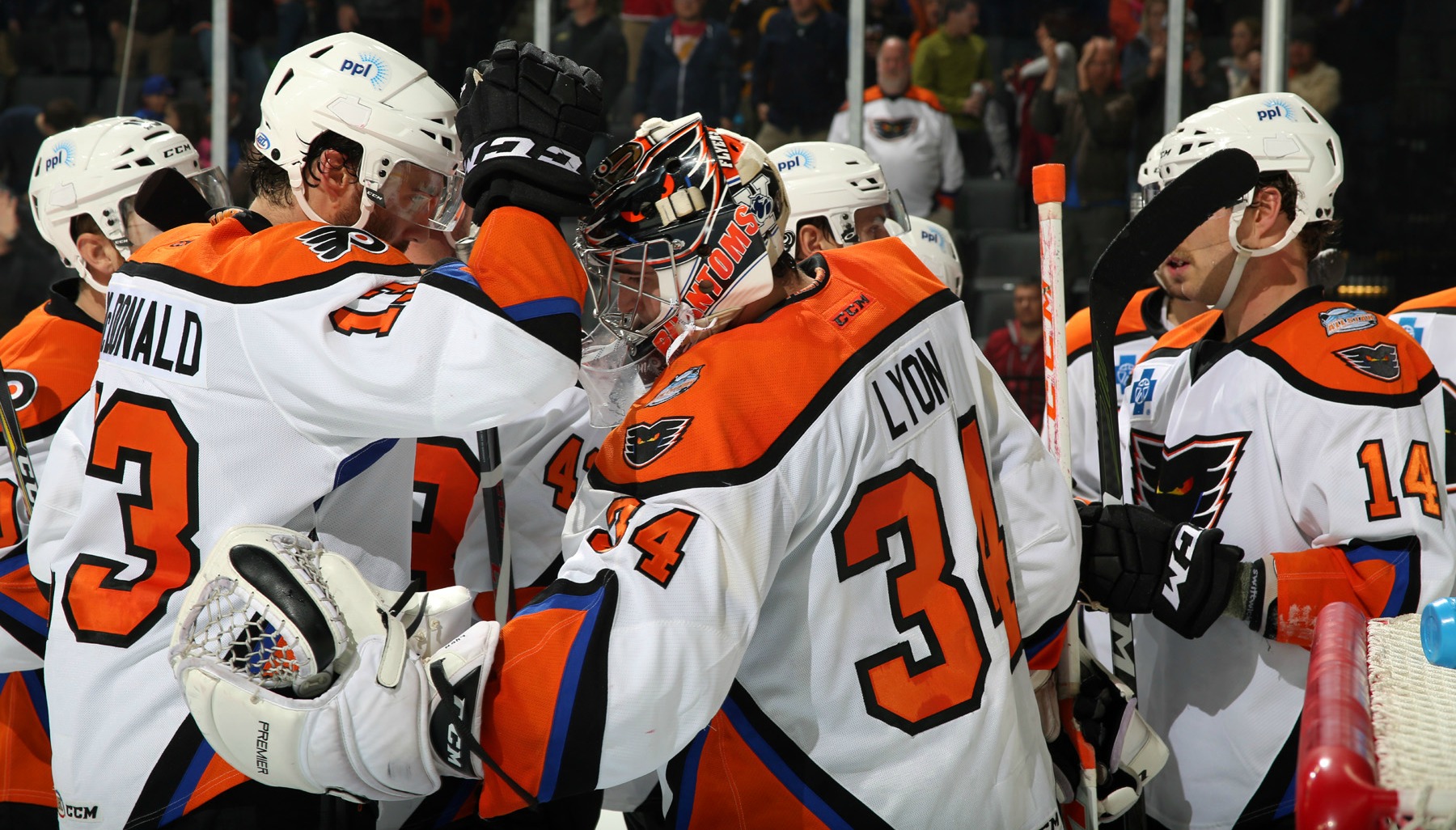 Fresh off a come-from-behind 4-3 victory over the Springfield Thunderbirds on Monday and winners of 10 of their last 14 games overall, the red-hot Lehigh Valley Phantoms (25-10-2, 52 pts., 0.703 pts. pct., 2nd Atlantic Division) return to the frozen surface for three games this weekend, including a pair of highly-anticipated tilts at PPL Center. The Phantoms currently boast the second-most wins (25) in the American Hockey League and second-highest standings points total (52). 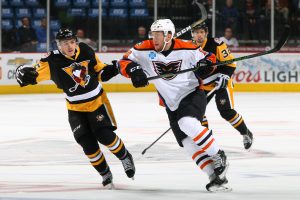 Lehigh Valley’s weekend action begins on Friday, January 20 when the Phantoms welcome the first-place Wilkes-Barre/Scranton Penguins to PPL Center for just the second time this season. Wilkes-Barre/Scranton (28-8-3, 59 pts., 0.756 pts. pct., 1st Atlantic Division) currently leads all 30 AHL teams in wins (28), standings points (59) and points percentage (0.756). The Penguins saw their seven-game winning streak come to an end on Monday as Wilkes-Barre/Scranton was handed a 4-1 setback at the Syracuse Crunch. Despite Monday’s loss, the Penguins still have claimed 13 of their last 17 games overall.

Friday’s contest will mark just the second of 12 total meetings during the 2016-2017 regular season between Lehigh Valley and Wilkes-Barre/Scranton after the Phantoms claimed the series opener with a 4-1 triumph at PPL Center back on November 16.

Friday’s game, which is presented by Air Products, will kick off Lehigh Valley’s Pre All-Star Classic Celebration as the Phantoms will take the ice wearing specialty jerseys. A limited number of tickets remain for Friday’s game and can be purchased online HERE. 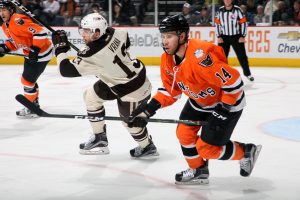 The Phantoms are then back in action at PPL Center on Saturday, January 21 when they welcome the Providence Bruins back to downtown Allentown. Despite dropping two of three games last weekend, Providence (22-10-7, 51 pts., 0.654 pts. pct., 3rd Atlantic Division) enters the week as one of the hottest clubs in the AHL having won 10 of its last 12 games and 15 of 18 overall. Last weekend, the Bruins were handed a 2-1 loss at home to the Utica Comets on Friday before rebounding with a 1-0 shutout at the Springfield Thunderbirds on Saturday only to close the three-game weekend with a 5-3 defeat back on home ice to the Bridgeport Sound Tigers.

Saturday’s contest will mark the fourth of six total meetings during the 2016-17 season between Lehigh Valley and Providence with the Phantoms having claimed each of the first three head-to-head showdowns. To date, Lehigh Valley has outscored the Bruins 15-6 in three prior meetings and the Phantoms are coming off a convincing 7-1 triumph over Providence at PPL Center on December 17 in the most recent collision.

Saturday’s game, which will continue the Pre All-Star Classic Celebration, will also feature a Youth Jersey Giveaway to the first 2,500 kids 14 and under in attendance presented by Capital BlueCross, Service Electric Cable TV & Communications, Dick’s Sporting Goods and PALCS. A limited number of tickets remain for Saturday’s game and can be purchased online HERE.

The Phantoms then cap this week’s action on Sunday, January 22 when Lehigh Valley heads back to Giant Center for a rematch with the Hershey Bears. The two Pennsylvania rivals split a home-and-home series last weekend and have already split eight prior get-togethers this year.

Hershey (19-10-9, 47 pts., 0.618 pts., pct., 4th Atlantic Division) dropped two of three games last weekend and enters the week having fallen in six of the club’s last seven games overall (1-4-2). After splitting their home-and-home weekend series with Lehigh Valley, the Bears were doubled up 4-2 by the Binghamton Senators in Hershey on Sunday. 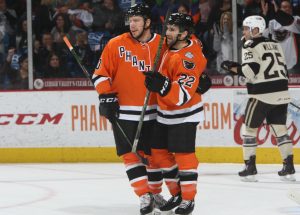 Cole Bardreau recorded a goal and two assists and the Lehigh Valley Phantoms converted a season-high four power play markers en route to a 6-2 victory over the Hershey Bears in front of 8,710 fans inside PPL Center. Corban Knight (goal, assist), Chris Conner (goal, assist) and Will O’Neill (2 assists) also notched multi-point efforts in support of Anthony Stolarz who earned the victory between the pipes after 15 saves on 17 Hershey shots.

Travis Sanheim (6th, 7th) and Greg Carey (18th, 19th) each scored twice as the resilient Phantoms battled back at Giant Center in Hershey but the Bears were able to hang on for a 6-4 win as the in-state rivals split their home-and-home weekend series. Andy Miele and All-Star forward Jordan Weal chipped in a pair of assists each as Lehigh Valley was handed just its fourth setback over the team’s last 13 games.

With Saturday’s decision, the Phantoms moved to 4-4 this season head-to-head against Hershey. 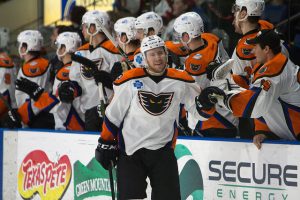 The Phantoms scored three goals in less than four minutes in the third period and erased a late two-goal deficit in claiming a 4-3 come-from-behind victory over the Springfield Thunderbirds. Greg Carey (20th, 21st) scored twice for the second time in as many games while Scott Laughton (6th) and Andy Miele (4th) also found the back of the net for Lehigh Valley in front of goaltender Anthony Stolarz who earned the victory between the pipes after 25 saves on 28 Springfield shots.

Carey has now converted 10 goals over his last 12 games while Laughton found the back of the net for third time in his last five outings.

Service Electric’s TV2 Sports will be broadcasting live all of the Phantoms’ 20 remaining regular season home games. If you can’t make it out to the rink, be sure to catch all the exciting action live in HD quality with Steve Degler, Todd Fedoruk, Doug Heater and Kristi Fulkerson! Pre-game coverage begins with “Phantoms Front and Center” 30 minutes before puck drop. And don’t miss “Phantoms – Breaking the Ice” every Monday from 7:00 – 7:30 p.m. throughout the season live at Chickie’s & Pete’s at PPL Center!

Tickets for each of the Phantoms’ 20 remaining regular season home games are available now online at pplcenter.com, by calling 610-347-TIXX [8499] or in-person at the PPL Center Box Office [7th & Hamilton].