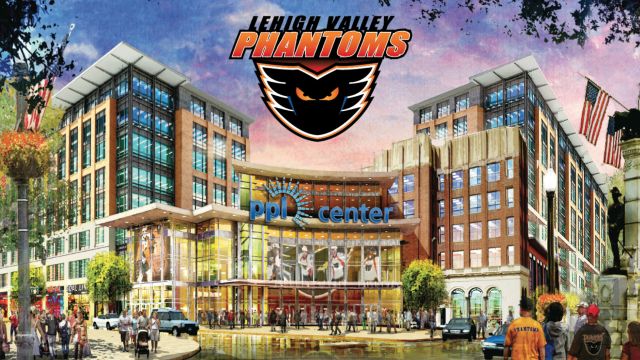 Ever since the Spectrum’s days became numbered, the Flyers began a count towards putting the Phantoms in the Lehigh Valley. The organization long has loved the idea of an affiliate 75 minutes up the road, playing in a Global Spectrum managed state-of-the-art arena. And now that it is three months from reality, the Flyers want to make certain Allentown and Bethlehem love the Phantoms, too.

“You never go into a season thinking you are going to have a poor team at any level,” says Flyers GM Ron Hextall. “But yeah, we talked about needing to be better there and grooming our kids in a competitive environment.”

The Phantoms, who never made the playoffs in their five years in Adirondack, have 4100 season ticket commitments for the new 8,500-seat PPL Center with reason to expect a better performance in 2014-15.

Since the start of free agency on July 1, the organization has signed forwards Andrew Gordon, and Blair Jones, two forwards with NHL experience and accomplished AHL resumes; enforcer Zack Stortini and goalie Rob Zepp, who has spent seven years excelling in the highest professional league in Germany.

Zepp is looked upon as a capable emergency call-up in case of injury to either Steve Mason or Ray Emery, but also as veteran stability in Lehigh Valley while Anthony Stolarz, the Flyers 2012 second round draft choice, begins his professional career.

Stolarz will not be the only good NHL prospect playing for the Phantoms. Center Scott Laughton, the Flyers’ No. 1 pick in 2012, and defensemen Shayne Gostisbehere and Robert Hagg, recent third and second round draft choices whom the Flyer project as eventual NHL regulars, likely will spend more than just token time in Lehigh Valley this season.

Every indication, both by Hextall’s words and deeds – he has made almost entirely depth signings thus far in free agency — is that the new GM is determined to steer a development-first path in team building.

Defenseman Sam Morin, the 2013 first rounder, still has a year to go of junior. But Hagg and Gostisbehere already have impressed in joining Adirondack for the final 10 and two games last season, while other young Phantoms — Mark Alt, Nick Cousins, Peter Straka, Brandon Manning, Marcel Noebels and Brandon Alderson — are expected to step up with another year’s experience and more talent around them.

“We added a few pretty good players, “said Hextall.  “But our kids are also a year older and we have some good prospects going into there for their first year, so by virtue of all those things I think we’ll be much more competitive”

In addition to being just one phone call away from Philadelphia, potential Flyers are now just 75 minutes away. When the organization’s minor league team was just across the parking lot from the NHL club there was no better place to play in the AHL, enabling the Flyers management to pack the Phantoms roster to Calder Cups in 1998 and 2005, the lockout season.  The organization wants to create the same level of buzz in Allentown, both in the stands and in the team rooms.

“Sightlines were good [at the Glens Falls Civic Center] and, considering our [lame duck] status, so was the support,” said Phantoms’ coach Terry Murray.

“But we had with a weight room that could only hold five players at a time. The place was just kind of worn out.

“The owners took us to Allentown for a tour last year, when the building was far enough along that we could have a good feel for what the facilities are going to be like. The dressing room is going to be tremendous, with a weight room and a lounge that will be the best there is outside the NHL.  We’ll have a room where players will want to hang out to watch a movie or play video games.

“Paul Holmgren wanted to have better teams in Adirondack, but I know it was hard to get good veteran AHL players to go there because of the facilities and the distance.

“The location change does even more than cut down our travel.  It was more difficult for managers and scouts to get to Glens Falls to watch a game. I notice a big difference in body language of players when scouts and development coaches are watching.  [NHL front office personnel] will be able to see Flyer and Phantom games on the same day.”

Conceivably, in an emergency situation, a player could even play for both the Flyers and Phantoms on the same day.

‘We will be able to have a player here in an hour and 15 minutes,” said Hextall. “Plus, us moving to Reading [for the East Coast Hockey League affiliation] makes it easy to send guys down from Allentown for a week, even a weekend.

“We want to use that level like we once did with [Ruslan] Fedotenko and [Todd] Fedoruk. It doesn’t make sense to have a potential second-line player play on a fourth line in the American League. Why not send them down to play?

“There will be a lot of convenience.  The No. 1 thing, though, is developing players and we will have a facility conducive to that. This will be awesome for us.”