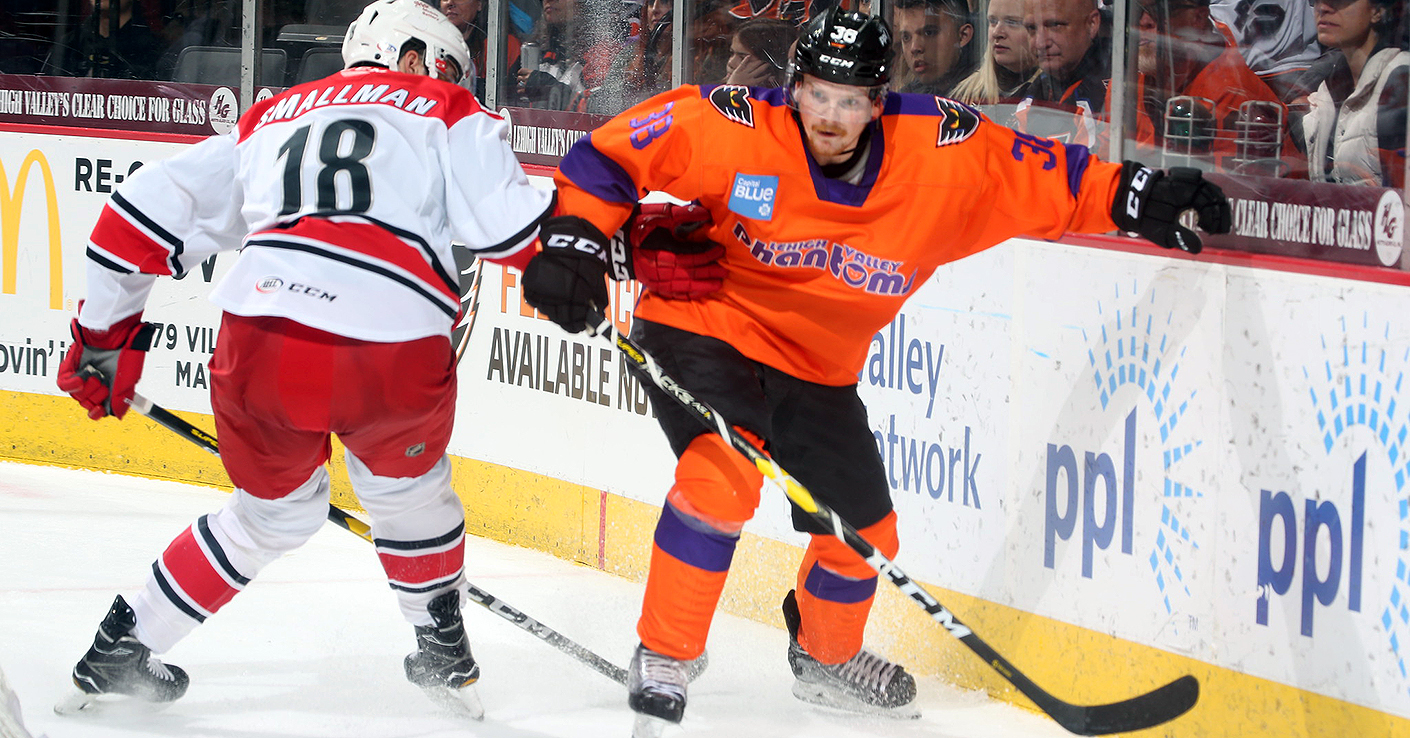 Lehigh Valley, Pa – The Lehigh Valley Phantoms (8-5-1-4) played a one-goal game for the 13th time this season and came away with a thrilling 5-4 victory in overtime against the Charlotte Checkers (6-7-3-0) as Retro Week continued with 80’s Night. It was the Phantoms seventh game that extended into overtime and Mark Friedman was the hero, scoring the game winner in the extra period. David Kase scored two goals as part of a three-point night, both career-bests for the Czech forward. Tyler Wotherspoon (3A), Cal O’Reilly (1G, 2A) and Mikhail Vorobyev (3A) also had three point nights for Lehigh Valley.

The Lehigh Valley Phantoms and Charlotte Checkers matched up for the second time in three nights at PPL Center on Friday night. The Phantoms looked for a home-series sweep over the Checkers after defeating them 3-2 on Wednesday night thanks to a late third period goal from Gerry Fitzgerald 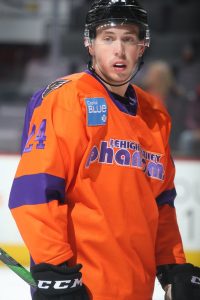 The Checkers struck first while on the power play as forward Julien Gauthier was able to send his own rebound past Phantoms goalie Alex Lyon to open the scoring at the 7:19 mark of the first period.

The Phantoms tied it up late in the period when David Kase was on the receiving end of a tic-tac-toe play starting with Mikhail Vorobyev entering the zone and finding Mark Friedman who slipped a perfect pass to Kase as he drove towards the net and sent the puck home to tie it 1-1. It was Kase’s second goal of the season while Vorobyev recorded his fifth assist of the season and Friedman picked up his fourth of the year.

The Checkers regained the lead just over a minute later when defenseman Jake Bean sent a slap shot past Lyon at the 18:48 mark. The goal did take a bit of luck to get past Lyon as Charlotte forward Stevn Lorentz was originally screening Lyon during the shot and a timely jump from Lorentz gave the puck just enough room to go through his legs and past Lyon. With the goal, the Checkers took a 2-1 lead into the first intermission despite a last minute push from the Phantoms.

After being denied at the end of the first period to tie the game, the Phantoms would get their opportunity around the halfway mark of the second period. Phantoms forward David Kase scored his second goal of the night, this time sending a rebound off Forsberg that he corralled and was able to push into the net despite crashing down to the ice in the process. Both defenseman Tyler Wotherspoon and forward Mikhail Vorobyev picked up assists on the play, for Voroybev it was his second of the evening. 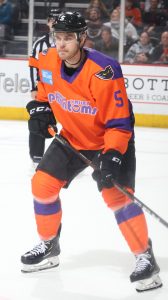 Charlotte, however, answered the Phantoms goal a few minutes later when defenseman Jake Bean scored his second goal of the evening, sending one past Lyon to make it 3-2. The Phantoms looked to make one last push in the period to tie the game at 3-3 but were unable to do so. The Phantoms entered the second intermission of the game trailing 3-2.

In the first minute of the third period, the Checkers stretched their lead to 4-2 when forward Max McCormick off a face-off ripped a quick wrister past Lyon. The Phantoms, as they were throughout the night, were resilient following the Checkers goal and it would pay off when forward Greg Carey found his sixth goal of the season when he picked up a loose puck in front of the net, turned, and fired it past Forsberg to make it a 4-3 game. Wotherspoon and O’Reilly assisted on the tally, Wotherspoon’s second assist and second-straight game with multiple points. 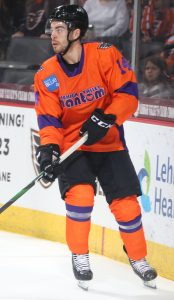 Less than two minutes later. the Phantoms tied the game while on the penalty kill, but were able to get an extra attacker on the ice thanks to a delayed Charlotte penalty. As Alex Lyon got to the bench, giving the Phantoms a fifth man on the ice, the Phantoms raced up the ice before watching Mikhail Vorobyev dish a perfect backhand, circle-to-circle pass to Cal O’Reilly who unloaded a rocket past Forsberg to the the game at 4-4. Tyler Wotherspoon picked up his third assist of the game to tie a career-high while playing in his 400th professional game of his career.

The final five minutes of Saturday’s game was the most intense of the game, with both teams continuously trading shots and checks. The ending of the period sent both teams into the overtime period with high emotions. The Phantoms needed extra time for the seventh time this season and for the second time were able to win it during the five-minute overtime period. Just 1:23 into the extra frame, tonight’s first star of the game, blasted a shot on net that Forsberg was able to stop but not secure and Mark Friedman was able to get his stick on the puck and push it over the goal line to send the PPL Center crowd into a frenzy and earn Lehigh Valley the two points.

Next Time Out: The Phantoms will finish up their homestand on Saturday evening when they take on the Belleville Senators for the first and only time this season. Retro Week will conclude as we celebrate the 90’s!