TODAY:
It’s a GAMEDAY at PPL Center presented by MassMutual as the Lehigh Valley Phantoms host the Utica Comets, AHL affiliate of the New Jersey Devils. Lehigh Valley (17-18-8) is 2-2-0 so far in its current six-game homestand and places sixth in the Atlantic Division having climbed ahead of Wilkes-Barre/Scranton for the last playoff spot. Utica (29-9-5) is in first place in the North Division and has been the top team in the AHL all season. The Phantoms are 1-1-0 against Utica. Tonight is Game 44 of the 2021-22 regular season. There are 33 games remaining.

LAST TIME:
Morgan Frost scored on a deflection goal of a Charlie Gerard point shot to break a 1-1 tie with barely more than 4:00 remainining in a 3-2 victory over the Hershey Bears on Sunday afternoon at PPL Center. Hayden Hodgson scored his team-leading 13th of the year and Cal O’Reilly added an empty-netter late before the Bears scored an inconsequential goal with one second remaining to provide the 3-2 final. Felix Sandstrom had 33 saves as the Phantoms improved to 5-1-1 against their Chocolatetown rivals.

ON THE MOVE:
Morgan Frost was called back up to the Flyers after scoring the pivotal goal in his last game with the Phantoms on Sunday.
Maksim Sushko went up to the Flyers to make his NHL season debut on Thursday against Washington. Sushko has returned to the Phantoms as has center Jackson Cates. 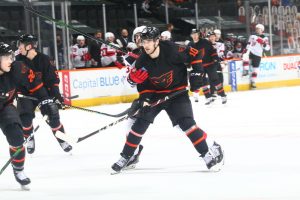 TANNER’S BACK:
Tanner Laczynski has been actived from Philadelphia’s injured reserve and loaned to the Phantoms. He will make his season debut this weekend. The talented center out of Ohio State had hip surgery in September during Flyers’ Training Camp and has been rehabbing and regaining his strength ever since. Laczynski scored 6-4-10 in 14 games with the Phantoms last season and also made his NHL debut with the Flyers in a five-game stint in April. 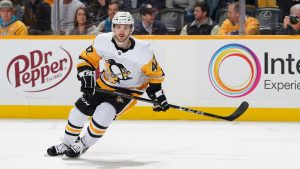 NEW GUY:
Forward Adam Johnson has been acquired in a trade with the Ontario (Cal.) Reign in exchange for future considerations. The Minnesota-Duluth product has played in 227 career AHL games scoring 46-79-125. Johnson spent three seasons with the Wilkes-Barre/Scranton Penguins from 2017-20 where he played in 185 games scoring 39 goals. He also has played in 13 NHL games with the Pittsburgh Penguins scoring one goal.

UTICA COMETS:
Kevin Dineen’s Utica Comets raced out to a league-record 13-0-0 start and have been the top team in the AHL all season. They recently slipped to second-best just a few pwercetnage points behind the Stockton Heat. A.J. Greer scored four goals on Friday in the Comets’ 4-2 win vs. Rochester. New Jersey first-rounder Alexander Holtz has cranked up 17 goals this season which is second among AHL rookies. The Comets are tops in the conference in both offense (3.65 goals per game) AND defense (2.65 allowed). League-leading goalie Akira Schmid (12-2-2, 2.15, .929) has been recalled to New Jersey and young German-born talent Nico Daws (12-3-2, 2.41, .918) has returned to Utica from the NHL.

Utica head coach Kevin Dineen is a former Philadelphia Flyer for five seasons (1991-96) where he played for his father, head coach Bill Dineen. He was a captain of the Flyers for one season and also was one of the most popular players in Hartford Whalers’ history where he spent a majority of his 1,188 career NHL games.

INCREDIBLE COMEBACK:
The last time the Phantoms played Utica was the night of the incredible comeback on New Year’s Eve in central New York. Lehigh Valley trailed 4-0 and 5-1 before scoring five straight to take a stunning 6-5 victory in overtime. Hayden Hodgson tied the game with 35 seconds left in the third and then assisted on Cal O’Reilly’s overtime winner.