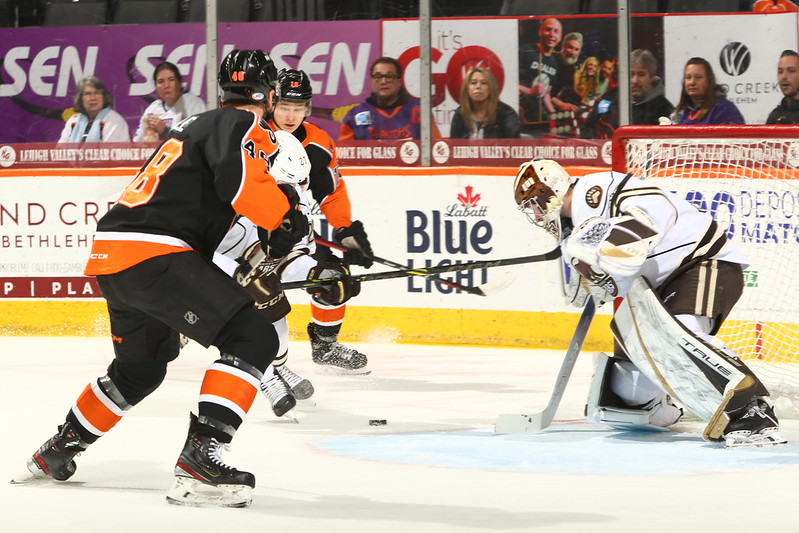 Phantoms Improve to 5-1-1 vs. Hershey

Lehigh Valley, PA – Morgan Frost broke a 1-1 deadlock with just 4:16 left to push the Phantoms to a 3-2 win over the Hershey Bears on Sunday afternoon at PPL Center. Frost (5th) redirected a point shot from Charlie Gerard for the decisive marker.

Hayden Hodgson (13th) and Cal O’Reilly (12th) also scored for Lehigh Valley (17-18-8) who continued its dominance of the Bears and improved to a 5-1-1 record against the rivals from Chocolatetown.

Felix Sandstrom was sensational for the Phantoms in acquiring his eighth win of the season witjh 33 saves on 35 shots. One of the goals that got past him was inconsequential to the end result when the Bears found the back of the net with barely more than one second remaining to provide for the closer final margin. 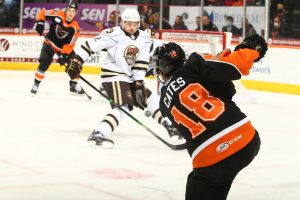 Hershey took an initial lead in the first period on Marcus Vela’s defelection shot of a Macoy Erkamps drive for a 1-0 advantage.

Brennan Saulnier dropped the gloves with newcomer Nick Isaacson in an entertaining scrap which the crowd enjoyed.

Lehigh Valley countered early in the second period with Hayden Hodgson’s big one-time blast from the top of the left circle on the power play that ripped past Fucale for Hodgson’s team-leading 13th goal of the season. Adam Clendening and Cal O’Reilly assisted on the play. O’Reilly registered his 524th career helper, ninth-most in AHL history.

The game stayed deadlocked at 1-1 for most of the rest of the way with both teams coming up with big penalty kills when they need to.

Lehigh Valley won an offensive zone faceoff that led to Gerard’s shot/pass from right point that went to Frost in the high slot. Frost got a piece of it about waist-high and chopped it down to bounce the go-ahead goal past the left skate of Fucale for a 2-1 lead. The Bears indicated that the play involved a high stick but the officials determined it was a good goal with just 4:16 left to give the Phantoms their first lead of the afternoon.

Cal O’Reilly found the back of the net from the red line for an empty netter with 33 seconds left. Dylan McIlrath was blocking in front of the cage and got a backhand on the O’Reilly shot but it dribbled behind him and into the net anyway.

O’Reilly had goals in every game of the weekend and the 35-year-old captain now has a three-game goal streak. O’Reilly leads the Phantoms with 33 points and is second on the team on goals behind Hodgson.

Mason Morelli got a pice of a center-point shot with almost one second remaining to chip a puck over the shoulder of Sandstrom at the end of the game.

The Phantoms went 2-1-0 on their busy three-game weekend and are 2-2-0 thus far on their six-game homestand which is their longest of the season.

The team will get a chance to breathe for a few days before returning to action next weekend to conclude its stretch of consecutive home games.

The Phantoms return to PPL Center Saturday night against the Utica Comets on Hockey is For Everyone Night. The Phantoms will host the Springfield Thunderbirds on Sunday at 3:05 p.m. on meLVin’s Birthday Bash.