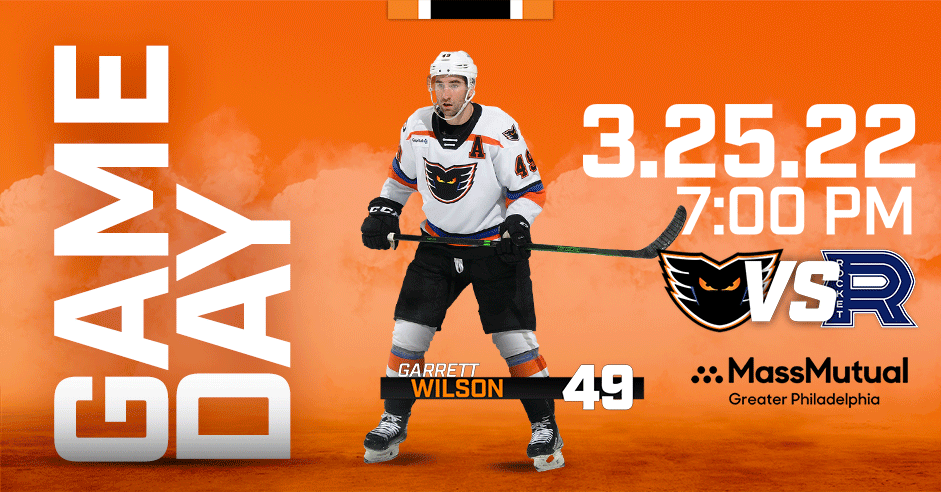 TONIGHT
It’s a GAMEDAY presented by MassMutual with the Lehigh Valley Phantoms heading north of the border to take on the Laval Rocket.
Lehigh Valley (22-26-10) is playing Game 5 of a six-game road swing. This is Game 59 of the season and there are 18 remaining including tonight.
Tonight is Cal O’Reilly’s 1,000th pro game.

LAST TIME
The Phantoms struck early on a Wade Allison goal just 20 seconds in but the Hershey Bears surged back for a 5-1 win at Giant Center on Wednesday. Beck Malenstyn led the Bears with a pair of goals. It was only the second loss in the last six games for Lehigh Valley.

HODGSON’S DEBUT
Congrats to Hayden Hodgson who became the second Lehigh Valley player to score a goal in his NHL debut with the Flyers. Morgan Frost was the first to do it two years ago. Hodgson began the year on an ECHL contract but his hard work earned him an AHL deal at the beginning of the season and eventually an NHL contract in March. Hodgson is tied with Cal O’Reilly for the team lead scoring 18 goals with the Phantoms.
Hodgson is the 36th Lehigh Valley Phantoms player to receive a recall for his NHL debut with the Flyers.
He also becomes the 24th player to score a goal in his Flyers’ debut joining a list that also includes Al Hill, Eric Lindros, Mike Richards, Justin Williams, Colin Forbes, David Laliberte, Harry Zolnierczyk, Jason Akeson and Morgan Frost.

LAVAL ROCKET
Laval (28-21-4) is in second place in the North Division behind only the Utica Comets. The Rocket lost in a shootout to Belleville 2-1 on Wednesday night despite 40 saves by Cayden Primeau. The Rocket are on a three-game point streak (2-0-1)
Lehigh Valley defeated Laval on March 11 in a come-from-behind effort. After trailing 3-1 in the second period, Wade Allison produced two assists and then scored the game-winning power play goal in the third in a 4-3 thriller at PPL Center. Phantoms’ alum Danick Martel has scored 10-12-22 with the Rocket. Philadelphia-area native Cayden Primeau has returned to the Rocket from Montreal. The goaltending prospect is the son of former Flyers’ captain Keith Primeau and played for Bishop Eastace Prep and the Philadelphia Revolution. Primeau (12-9-1, 2.85, .910) recorded a 20-save shutout the last time the Phantoms visited Place Bell in Laval on Janaury 3, 2020 in a 4-0 win for the Rocket.

PHANTASTIC!
– Cal O’Reilly is playing in his 1,000th pro game tonight.
– Cal O’Reilly has 18 goals this season to equal a personal high. The 35-year-old captain of the Phantoms also had 18 goals in a season 15 years ago in the 2006-07 season when he was a 20-year-old rookie with the Milwaukee Admirals. Cal has five goals in his last five games including a pair of two-goal games. Cal rates 30th all-time in AHL scoring with 675 points. He is 9th all-time in assists with 527.
– Wade Allison is on a seven-game point streak from January 14 through March 23 scoring 7-5-12 in the stretch. He also had an unusual 4-game goal streak from January through March that included an almost two-month hiatus due to injury. He has goals in six of his last seven games with Lehigh Valley including a four-point performance on Saturday at Springfield which is the most for any Phantom in a game this season.