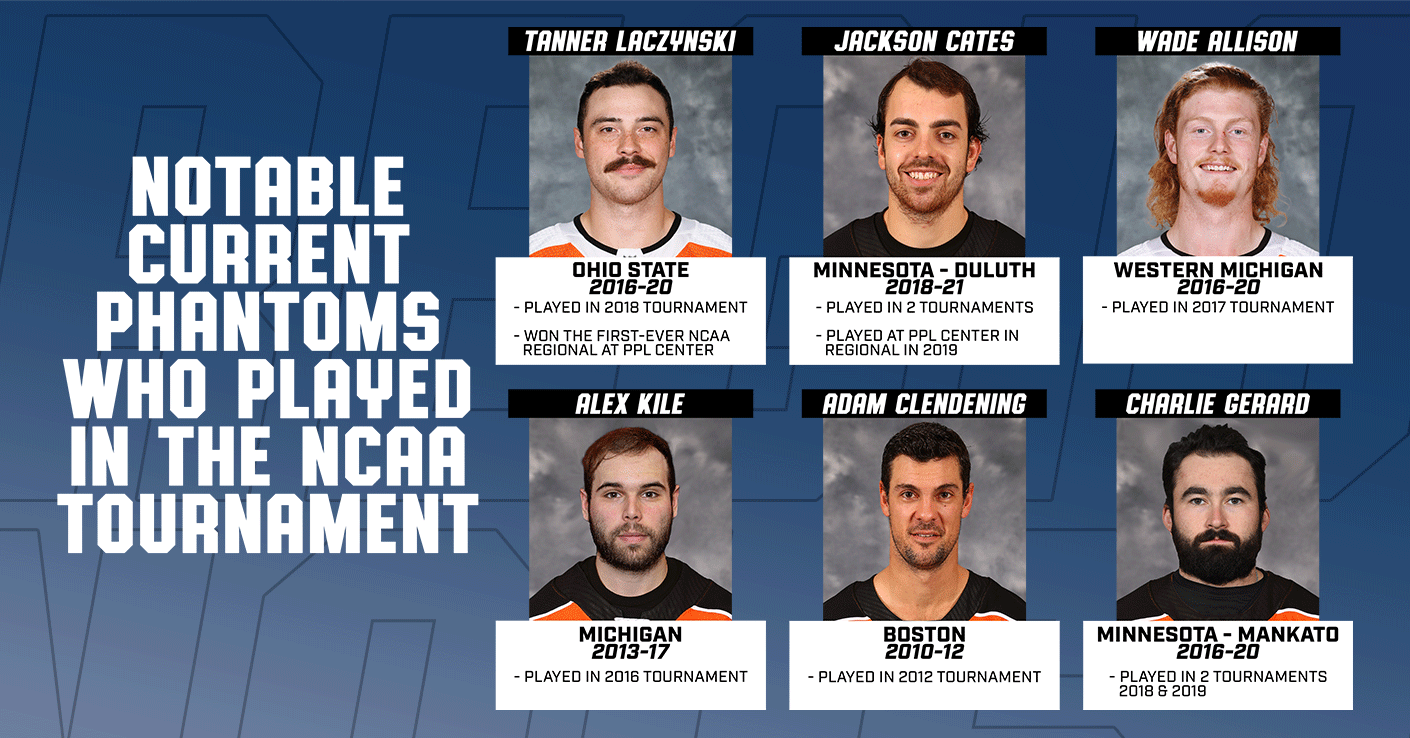 By Bob Rotruck
College hockey’s own mayhem in March is underway with opening round games in four regionals and 16 teams hoping to advance to the 2022 Frozen Four in Boston.

While the Lehigh Valley Phantoms are on the road, PPL Center will again be hosting the Midwest Regional at PPL Center which will include the #1 overall seed Michigan Wolverines as well as the American International Yellowjackets, Quinnipiac Bobcats and St. Cloud State Huskies.

The Phantoms have several players with NCAA tournament experience including Wade Allison (Western Michigan), Jackson Cates (Minn-Duluth), Adam Clendening (Boston), Charlie Gerard (Minnesota State), Alex Kile (Michigan) and Tanner Laczynski (Ohio State). It’s almost a guarantee that some of the players at PPL Center and the other regionals (Loveland CO, Worcester MA, Albany NY) will become future AHL players. Some of those players could even be joining AHL teams within the next week!

Philadelphia Flyers draft picks in the 2022 NCAA tournament include Bobby Brink (Denver), who leads the nation in scoring, Ronnie Attard (Western Michigan) and Noah Cates (Minn-Duluth) who is the brother of current Phantoms’ forward Jackson Cates.

The first two regional champions in the Lehigh Valley both featured current Phantoms players. Tanner Laczynski with Ohio State and Jackson Cates with Minnesota-Duluth both enjoyed the thrill of NCAA wins at PPL Center and advancing to the Frozen Four through Allentown before they later join the Phantoms in future seasons.

Phantoms’ center Tanner Laczysnski was at the historic first ever NCAA tournament games in Allentown in March, 2018. He scored the overtime winning goal against Michigan in the Big Ten Championship game and the then-sophomore talent then helped lead the streaking Buckeyes to back-to-back wins against Princeton and Denver to propel Ohio State to the Frozen Four for the first time in 20 years.

“It was unbelievable,” Laczynski said. “Obviously for us coming here and getting a chance to go to the Frozen Four and beating one of the top teams in the country (and defending national champions) in Denver. That was pretty special for us and a big opportunity for our program.”

Laczynski was already very aware that his future as a professional hockey player would likely be in the very same building where he was playing those NCAA tournament games in Allentown. He had been selected by the Philadelphia Flyers in the sixth round of the NHL Entry Draft in 2016.

“For me personally, thinking of one day playing in this rink. That was an exciting part as well. Coming here and seeing the city and where I would be hopefully playing. Definitely an experience I’ll remember for the rest of my life.”

Alex Kile of the Phantoms is a former captain of the Michigan Wolverines and absolutely bleeds Michigan Blue. Kile wanted to play hockey at Michigan his whole life. He’s looking forward to rooting for his alma mater in person at the very same rink where he plays in the AHL, provided the Wolverines dodge an upset by A.I.C. and advance to the regional final on Sunday when the Phantoms have a day off.
Kile had his fingers crossed while watching the NCAA Hockey Selection Show last Sunday.

“I was pumped (when it was announced Michigan was coming to Allentown). I knew it was between here and probably Worcester but I’m definitely glad it’s here for sure.”

Kile just joined the Phantoms in January arriving from the Maine Mariners of the ECHL. So it works out as a perfect coincidence that his Wolverines are coming to the same arena where he now plays in the AHL.

The Michigan Wolverines are a powerhouse this season with seven first-rounders including the top two picks in the 2021 draft, Owen Power (BUF) and Matty Beniers (SEA)

“I’m so excited,” Kile said. “I don’t think I’ve ever been this excited to watch Michigan. They have a legitimate chance to win it all. We’ll never see a talented team like this ever again in college hockey. It’s just a unique situation. It’s crazy. Whoever is recruiting at Michigan, I know (head coach) Mel (Pearson) does a lot of it but the assistants do it too…they’re doing a great job.”

It was also fun for Kile earlier this week to skate in practice at PPL Center while the ice had already been prepared with the center-ice logo for the upcoming NCAA hockey. It definitely provided an early NCAA Tournament vibe inside the team’s home in the Lehigh Valley.

“It reminded me of (tournament games in) Cincinnati when we played there for sure. All the boards are white now but they’ll have all the names of the college there for the game. I feel this rink is perfect for a regional tournament.”

For Michigan to win it all, they might have to get past another #1 seed in Minnesota State (Mankato). Phantoms forward Charlie Gerard’s team is considered to be a top contender for the title along with Michigan.

“Mankato’s always got a place in my heart,” Gerard said. “Great program. Great coaching staff. And great guys there. There’s still a couple guys I played with when I was there. Obviously I’m rooting for them and they’re having a great year.”

But Gerard knows as well as anyone else who’s been in the tournament that it isn’t always lined up for the favorites to make it through. The Mavericks were upset in the first round by fourth seeded Providence College in the 2019 tournament when the Friars scored six straight to overcome a 3-0 deficit. The heartbreak is real.

“We were in Providence and it’s just a bit of a bigger stage and every little thing matters and every mistake matters,” Gerard said. “You’re either won or done. You won the game, you win and move on, or you lose and you’re done. It’s definitely tough. But the atmosphere was great and it was a cool experience to play in those games.”

Gerard, a Cleveland-area native, also has a connection with current Phantoms’ teammate Tanner Laczynski. Freddy Gerard, Charlie’s brother, was linemates with Laczynski with the Buckeyes.

“Charlie’s always joking,” Laczynski said. “‘Do you think we’d be on a line if I went to Ohio State? You think me and my brother would be on a line with you?’ Oh yeah, I’d be in between the Gerard brothers. It’s fun to think about.”

The connections and bonds for the college players continue well past college.

Laczynski in the AHL sometimes goes up against former Buckeyes goalie Tommy Nappier who is now with the Wilkes-Barre/Scranton Penguins. They generally keep their discussions to pregame or postgame. But Laczynski admits to offering the occasional chirp at his former teammate.

“My freshman class was eight guys,” Gerard said. “So I played with them for four years. And you play with those other guys for two or three years. It’s a great experience and I wouldn’t trade it for the world. It’s something you’ll never forget.”

Jackson Cates and possible future Phantom, Noah Cates, not only won a national championship together at Minn-Duluth in 2019 but also went through Allentown to get there. It took an overtime win over upstart Bowling Green in the opening round in the 1 vs. 4 matchup for the Bulldogs to stay alive at PPL Center. Then it was a nailbiter against Quinnipiac with a late power-play goal with just 2:03 left that would allow Minnesota-Duluth an opportunity to win another National Championship.

At the 2019 Frozen Four in Buffalo, the Bulldogs knocked off Providence 4-1 in the National Semifinal round and then Jackson Cates scored a goal in the National Championship to seal a 3-0 win over UMass.

Unlike Laczynski, Jackson Cates did not know he would be returning to the Lehigh Valley following his NCAA experience in the area. He was an undrafted free agent who had not signed with anyone. But when the Philadelphia Flyers did acquire the brother of one of their draft selections, Jackson was able to say he was already familiar with the environs of his future AHL home rink and even had already enjoyed some success and had great memories there.

The Cates brothers also became part of another aspect of postseason history when they were teammates in the longest game in NCAA tournament history one year ago. Double-overtime and even triple-overtime classics, with all the intensity accompanying the dramatic competition, are almost always part of the NCAA tournament. But the Minnesota-Duluth Bulldogs and North Dakota Fighting Hawks went far beyond that when they competed well into the night, and even into the next morning, in an epic five overtime marathon that was one for the ages.

“It will probably be the craziest game I’ll ever play in,” Cates said. “Just the total effort from all the guys. It’ll be something I’ll never forget.

It was Jackson’s tying goal for the Bulldogs in the third period that ultimately forced the almost never-ending status of the game. A few hours later, it was freshman Luke Mylymok scoring the winning goal at 2:13 into the fifth overtime to send the Bulldogs to their fourth consecutive Frozen Four.

Some of the next players to join the Phantoms and other AHL teams in the next few weeks will have similar memories of a lifetime from the NCAA tournament.