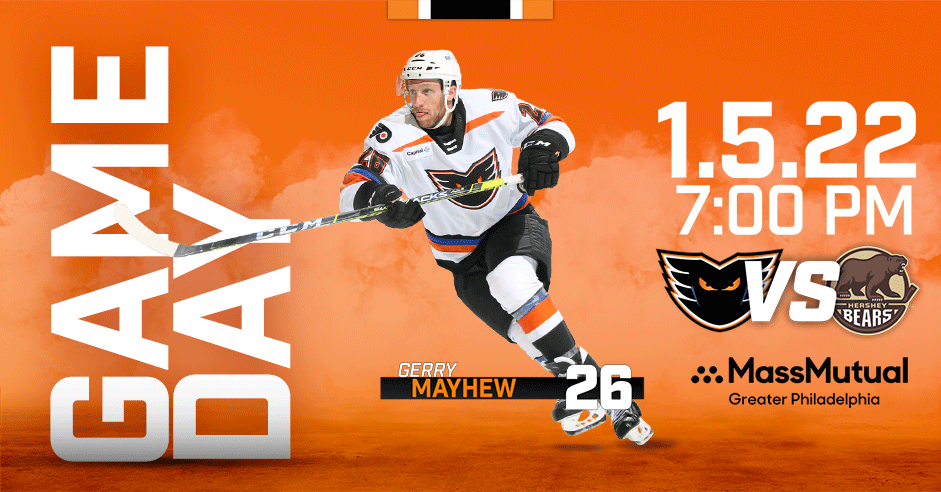 TONIGHT: It’s a Phantoms Gameday presented by MassMutual as the Lehigh Valley Phantoms travel to Hershey to play the first of four straight on the road. Tonight’s game in Chocolatetown is a make-up date of a previously postponed game from November 29. The Phantoms are 2-1-0 against the Bears this season and carry a seven-game point streak (6-0-1) into tonight’s game.

LAST TIME: The Phantoms opened 2022 with their second straight overtime win when Adam Clendening struck for the decisive goal against the Bridgeport Islanders in a 2-1 triumph on New Year’s Day at PPL Center. Garrett Wilson scored his eighth of the season for the Phantoms and newcomer Garrett Metcalf was terrific in his AHL debut with 25 saves on 26 shots.

OVERTIME DRAMA: Lehigh Valley won overtime games on consecutive days for only the second time since the Phantoms arrived in Allentown in 2014. Cal O’Reilly scored the winning goal on December 31, 2021 at the Utica Comets and then Adam Clendening finished off the Bridgeport Islanders on January 1, 2022.
The only other time it happened was November 29 and November 30, 2019. T.J. Brennan scored the winner against the Wilkes-Barre/Scranton Penguins to open the weekend and then Andy Welinski blasted home the overtime goal against the Hartford Wolf Pack one night later

MOVING UP: Five Phantoms have been recalled to the Flyers and the Flyers’ Taxi Squad this week. Felix Sandstrom made his NHL debut on Thursday night San Jose and Gerry Mayhew played his first game as a Flyer on Wednesday night in an overtime win at Seattle. Jackson Cates, Cam York and Kirill Ustimenko also received the call for Philadelphia’s western road swing.

STREAKING: The Phantoms have a pair of three-game win streaks within their seven-game point streak. Lehigh Valley has also played four of the seven games to an overtime or shootout during the streak and five out of the seven games have been decided by one goal.

HERSHEY: Popular Phantoms alum Mike Vecchione has returned to action from injury. Hershey just added some reinforcements from the Capitals and the Washington Taxi Squad including forweard Mike Sgarbossa, defensemen Lucas Johanssen and Alex Alexyev, and goalie Pheonix Copley. It was announced that veteran captain Matt Moulson is out indefinitely following back surgery on December 30. Joe Snively leads the Bears with 8-17-25. The Phantoms won the last matchup 2-1 on December 21 with Pat Nagle making 29 saves and coming barely more than three minutes from his first-ever AHL shutout.

NOTEABLES:
– Pat Nagle has served as goalie in for 6 of the 7 games in the seven-game point streak for the Phantoms including four starts and two relief appearances. Nagle is 5-0-2 with the Phantoms.
– Hayden Hodson became the first Phantom to score two goals in a game this season when he sniped to the upper-corner with 35.1 seconds left for a 6-on-5 goal at Utica.
– Garrett Wilson has a two-game goal streak and is second on the team with eight goals (Gerry Mayhew has nine) which is also first among active Phantoms players.
– Lehigh Valley’s record for longest point streak was eight. That last happened February 7, 2018 through February 21, 2018. The Phantoms also had an eight-game win streak (and point streak) November 2, 206 through November 18, 2016.

UP NEXT: Lehigh Valley’s road-trip continues Friday night and Sunday afternoon in a two-game series at the Providence Bruins.