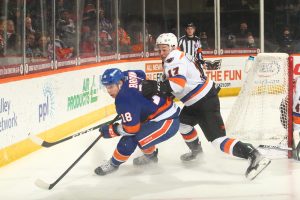 Weekly Recap
Friday, December 31
Phantoms 6 – Utica Comets 5 (OT)
The Phantoms stunningly overcame deficits of 4-0 and 5-1 to win at the best team in the AHL in a 6-5 thriller on New Year’s Eve. Hayden Hodgson’s second goal of the game tied the score at 5-5 with just 35.1 seconds left and then Hodgson stole the puck for a Cal O’Reilly overtime winner to stun the Utica faithful. O’Reilly finished with three points against his former team where he had served as captain four years ago. It was the first overtime win of the season for the Phantoms. The game marked just the fourth time in 25 years that the Phantoms have overcome a four-goal deficit to win.

Saturday, January 1
Phantoms 2 – Bridgeport 1 (OT)
Adam Clendening struck for the overtime winner and newcomer Garrett Metcalf made 25 saves in his AHL debut as the Phantoms opened the New Year by extending their point streak to seven (6-0-1). Garrett Wilson also scored in the second period to break a 0-0 tie with his eighth of the season, second-most on the team (behind Gerry Mayhew with nine).

Upcoming
Wednesday, January 5 (7:00) – Phantoms at Hershey Bears
The Phantoms play the first of four straight on the road with a midweek make-up date at the Hershey Bears. This is the rescheduled game from the postponement at Hershey on November 29. The Phantoms are 2-1-0 against Hershey this season. Popular Phantoms alum Mike Vecchione has returned to action from injury. Hershey just added some reinforcements from the Capitals and the Washington Taxi Squad including forweard Mike Sgarbossa, defensemen Lucas Johanssen and Alex Alexyev, and goalie Pheonix Copley.

COMEBACK CITY
On December 31, 2021 the Phantoms overcame a four-goal deficit to win for only the fourth time in franchise history. The Phantoms trailed at the Utica Comets by scores of 4-0 and 5-1 before the stunning comeback.
March 2, 2018 – Lehigh Valley Phantoms trailed Hershey 5-1 before rallying for a 7-6 win at PPL Center
March 21, 2017 – Lehigh Valley Phantoms down 4-0 at St. John’s IceCaps and came back to win in overtime 5-4. T.J. Brennan tied the game with under 2:00 left and then scored the overtime winner.
March 31, 1999 – The Philadelphia Phantoms rallied from a four-goal deficit at the Worcester IceCats falling behind 5-1 at the start before eventually winning 8-7.

VIDEO! It was a weekend to remember for the Phantoms with back-to-back overtime wins.

The Phantoms began New Year's Eve trailing 4-0 and 5-1 at the best team in the league. Comeback Time! pic.twitter.com/3miSLI6cF0

OVERTIME DRAMA
Lehigh Valley won overtime games on consecutive days for only the second time since the Phantoms arrived in Allentown in 2014. Cal O’Reilly scored the winning goal on December 31, 2021 at the Utica Comets and then Adam Clendening finished off the Bridgeport Islanders on January 1, 2022.
The only other time it happened was November 29 and November 30, 2019. T.J. Brennan scored the winner against the Wilkes-Barre/Scranton Penguins to open the weekend and then Andy Welinski blasted home the overtime goal against the Hartford Wolf Pack one night later