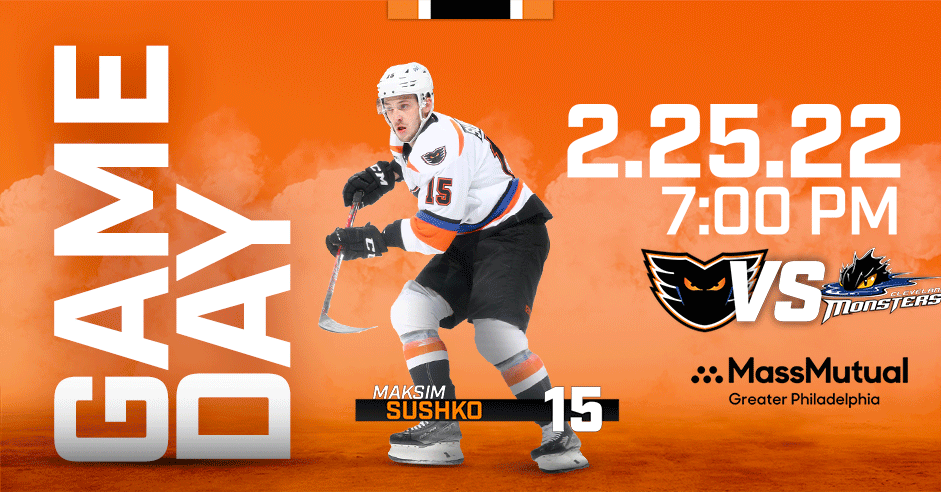 TODAY: It’s a GAMEDAY presented by MassMutual as the Lehigh Valley Phantoms play a weekend series at the Cleveland Monsters. Following tonight’s game, the two teams will have a quick turnaround for Saturday’s 1:00 p.m. rematch at Rocket Mortgage Fieldhouse.

Lehigh Valley (18-19-9) is two points back of Wilkes-Barre/Scranton for the final playoff spot in the Atlantic Division while also holding two games in hand. This is game 47 of the season. There are 30 games remaining including tonight.

LAST GAME:
The Phantoms rallied from an early 2-0 deficit to post an exciting 3-2 comeback shootout win at rival Wilkes-Barre/Scranton on Wednesday evening. Maksim Sushko (7th) scored from Adam Clendening to get the Phantoms on the board and then Hayden Hodgson (15th) converted down low on the power play to the the game. Clendening scored the winning goal in the shootout while Kirill Ustimenko picked up his first win of the season with 30 saves plus three more in the shootout competition.

USTI TIME!
Kirill Ustimenko picked up his first AHL win of the season and also his first in a little over two years with his 30-save gem on Wednesday in a 3-2 shootout win at Wilkes-Barre/Scranton. “Usti” also had his first AHL win at Wilkes-Barre/Scranton in February, 2020 when he racked up 38 saves for the Phantoms in a 5-3 victory at the Penguins.
Ustimenko entered in relief of Felix Sandstrom on Saturday night and has played in three games since his return to the Lehigh Valley roster going 1-1-1, 1.73, .940 with 79 saves on 84 shots.

WELCOME BACK:
Forward Alexis D’Aoust has signed another PTO with the Phantoms after two forwards went down with injuries on Wednesday. D’Aoust had just been released from his previous PTO after playing three games with Lehigh Valley.

Goalie Pat Nagle has returned from Beijing and rejoins the Phantoms from the USA Olympic Team.

CLEVELAND MONSTERS
The Monsters are 2-1-1 since ending a nine-game losing skid on February 12. Cleveland (15-21-9) is stilll in last place in the North Division and is surrendering 3.5 goals per game which is second-worst in the conference only to Rochester. Leading scorer Brendan Gaunce (16-12-28) has gone up to Columbus. 21-year-old seventh-rounder Tyler Angle from the Windsor Spitfires has scored 7-18-25 including a winner at Utica to end their winless streak. Phantoms alum J-F Berube was pressed into duty in Columbus and picked up his first NHL win since 2018 in a 7-3 victory vs. Buffalo.
The Phantoms defeated Cleveland 4-2 at PPL Center on December 11 in the only matchup of the season so far. Adam Clendening broke a 2-2 tie in the third period against his former team.

News and Notes:
– Lehigh Valley has gone 15-8-4 in its last 27 games after a beginning that saw just three wins in the first 19 games at 3-11-5.
– KILLING IT! The Phantoms’ penalty kill rates fifth in the AHL and second in the conference at 83.6%. The Phantoms have killed off 10 straight opposing power plays and are at an even stronger 87.3 % (62/71) in their last 24 games since December 18
– The Phantoms have played 46 games and have 30 remaining with barely more than two months to go in the 2021-2 regular season.
– Hayden Hodgson leads the Phantoms with 15 goals and has three goals in the last four games as well as 6 goals ni the last 9 games and 9 goals ni the last 15 games.