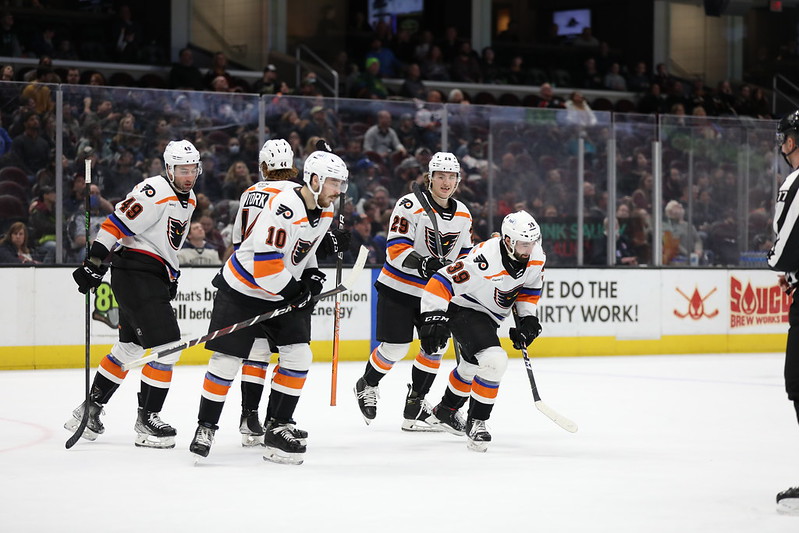 Cleveland, OH – Charlie Gerard scored his fifth goal of the season in his return to his home area but the Cleveland Monsters chipped in an overtime winner by Trey Fix-Wolansky in a 2-1 victory on Friday night at Rocket Mortgage Fieldhouse.

Kirill Ustimenko (1-3-2) made 18 saves on 20 shots but was beaten just 17 seconds into the extra period on Fix-Wolansky’s terrific effort after he had fallen forward and was crashing out on his belly. He was still able to flip the puck just past the blocker of Ustimenko for the winning goal.

Cleveland (16-21-9) and the Phantoms will rematch on Saturday at 1:00 p.m. to conclude Lehigh Valley’s three-game road swing. The two teams engaged in a number of skirmishes with a level of feisty activty perhaps more befitting a strong rivalry as opposed to two teams that were seeing each other for just the second time this season. Some of the combatants in the various scrums may be ready to continue their aggressiveness in the follow-up engagement less than 24 hours later. 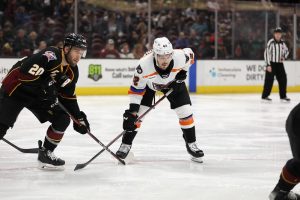 A tight first period yielded a minimum of shots on goal with both teams trying to find their offense. Cleveland out shot the Phantoms 5-4 in the opening frame. Tristan Mullin of the Monsters came the closest to scoring when he rushed up with a 2-on-1 shorthanded chance that he blasted off the crossbar.

The Monsters got on the board early in the second period mere seconds after their third power play of the game had concluded. With Cleveland still enjoying the advantage of an extra man in the attacking zone, Justin Scott carried the puck out in front of the left of the cage for a goal past the blocker of Ustimenko at 5:28 into the middle frame for a 1-0 Monsters’ advantage.

Lehigh Valley (18-19-10) started to find its offensive stride later in the second period. Matt Strome’s centering pass for Alexis D’Aoust resulted in a big one-timer in the slot that Cleveland goalie Cam Johnson was barely able to prevent from going five-hole. Strome had an additional scoring chance later in the period. The fourth liners had clicked earlier in the game as well with Brennan Saulnier’s move around a defenseman right to the net that almost resulted in a goal.

Ultimately, it was the Tanner Laczynski line that broke through following a Garrett Wilson collision in the corner. Laczynski connected with Charlie Gerard who fired from the right slot with just 1:05 left in the second to even the score at 1-1 on a goal also assisted by Wyatte Wylie as the Rocky River, Ohio native got the Phantoms on the board.

The second period ended with a strong right pad save by Ustimenko with just three seconds remaining.

Both sides traded good chances in the third period while also exchanging some shoves and almost punches. But the two teams were also careful to not take any costly penalties in the waning minutes of a tie game.

Cam York showed off some his flash and assertiveness more than once including different opportunities in which he took the puck deep setting up quality scoring opportunities for his teammates. One of his drives was a nifty flip to Bunnaman on the other side of the slot that very nearly broke the tie. York also had a close call to winning the game on his own shot in the closing minutes of regulation but he just missed wide of the corner.

Cleveland won the opening faceoff for overtime and quickly emerged with a 2-on-1. It looked like Fix-Wolansky was perhaps trying to find Tyler Angle on the backdoor but Fix-Wolansky still was able to reach the puck as he went crashing across the slot on his belly for the sensational and highlight-reel caliber winning goal at just 17 seconds into overtime.

Cleveland’s 16th overtime game of the season and Lehigh Valley’s 14th overtime result put the two teams at first and second for most extra-period contests this year (the Phantoms are now tied for second with Hershey and Bridgeport).

The Phantoms and Monsters have a quick turnaround for their 1:00 p.m. matchup on Saturday.

The Phantoms open a three-game homestand on Wednesday night taking on the Providence Bruins followed by a pair of games against the Charlotte Checkers on Friday, March 4 and Saturday, March 5 on the team’s 25th Anniversary Celebration Weekend.