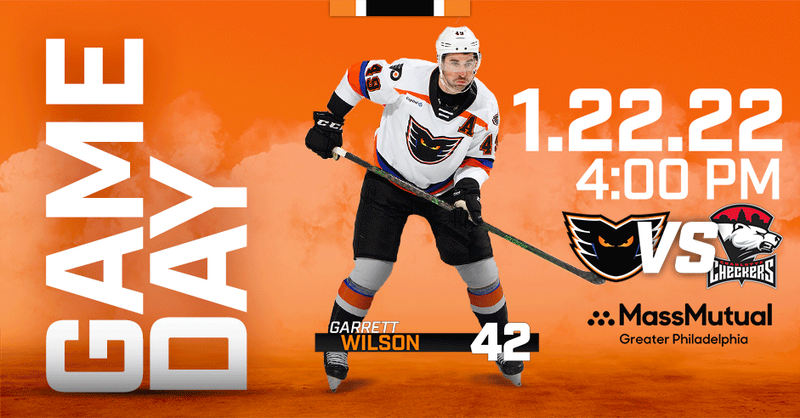 TONIGHT: It’s a Phantoms Gameday presented by MassMutual as the Lehigh Valley Phantoms travel south for the first of two against the Charlotte Checkers, AHL affiliate of the Florida Panthers and Seattle Kraken. Lehigh Valley (11-12-8) has points in 11 of the last 12 at 8-1-3 and rates in 6th place in the Atlantic Division. The Phantoms are 1-3-0 against Charlotte this year which includes a 5-3 win in their most recent meeting at Bojangles’ Coliseum. The 5th place Charlotte Checkers (18-14-2). The Checkers are coming off a split this week in a pair of games against the Springfield Thunderbirds including a 4-2 win on Thursday. The Phantoms and Checkers will rematch in Charlotte Sunday at 1:00 p.m. This is Lehigh Valley’s last visit to North Carolina this season.

LAST TIME: The Lehigh Valley Phantoms picked up a hard-fought 3-1 win at the Wilkes-Barre/Scranton Penguins on Wednesday night in the opener of five straight away contests. Wade Allison broke a scoreless tie in the third period with his power play play goal. And Linus Sandin deflected a Cal O’Reilly point shot, also on the power play, for a 2-1 lead. Adam Clendening had a pair of assists and Maksim Sushko sealed the win with an empty netter. Felix Sandstrom had 28 saves in the victory.

TRANSACTIONS: Forwards Wade Allison and Jackson Cates have been recalled to the Flyers. Connor Bunnaman returns to the Phantoms from the Flyers Taxi Squad. Allison departs the Phantoms after scoring in three straight games since his recovery from an elow injury in Decemer. Allison hasn’t played for the Flyers yet this season. Cates had a quick return to the Phantoms for his first AHL game in almost a month.

OLYMPICS HONOR: Pat Nagle has been chosen to play for the United States National Team at the upcoming 2022 Winter Olympics in China. The 34-year-old veteran goalie will depart the Phantoms at the end of January. Congratulations, Pat!!

CHARLOTTE CHECKERS: Geordie Kinnear’s Checkers enter action at 18-14-2 after a 4-2 win over Springfield on Thursday. Charlotte has been hampered by injuries and recalls to Florida and Seattle and now has several tryout contract players in the lineup. Rookie Logan Hutsko has impressed and leads the team in scoring with 7-15-22. Fellow rookie Cole Schwindt is next at 9-11-20.

NOTEABLES:
– Wade Allison scored goals in three straight games before his recall to the Flyers.  He had not played in almost a month since an elbow injury on December 17. Before that, Allison had played in just three games this season after sustaining an ankle injury during Flyers’ Training Camp in September.
– Cal O’Reilly and Adam Clendening both scored 1-6-7 in the three games last weekend. They are also tied for the team lead in scoring at 6-16-21 for both players.
– O’Reilly has points in sevn of his last eight games scoring 2-13-15 in that stretch. His 519 career assists rates 9th all-time in AHL history.

UP NEXT: The Phantoms and Checkers rematch on Sunday at 1:00 p.m. The Phantoms return to PPL Center on Sunday, January 30 at 5:05 p.m. against the Hershey Bears on Kids Activity Book Night.