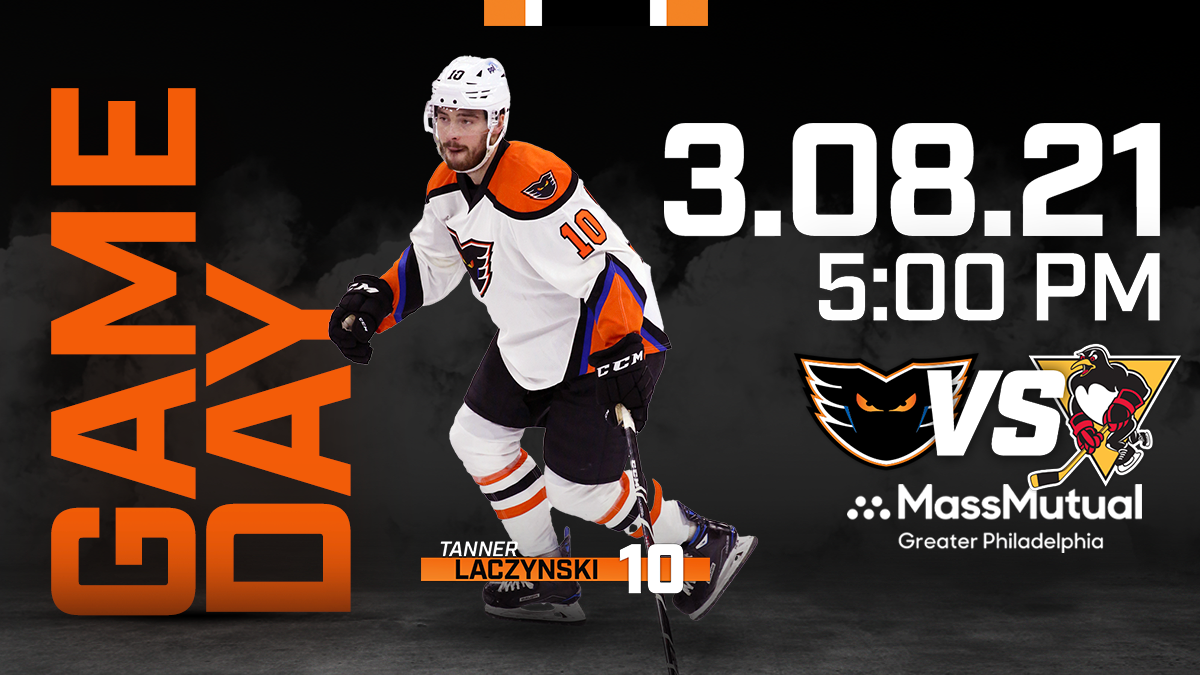 Today’s Game – The Lehigh Valley Phantoms travel to Mohegan Sun Arena at Casey Plaza for a Monday evening game against the Wilkes-Barre/Scranton Penguin. Tonight marks the 10th game out of 38 in the 2021 season. Lehigh Valley and Wilkes-Barre/Scranton are meeting for a third time out of ten scheduled clashes this season. The Penguins took a pair of victories from the Phantoms in a home-and-home series on February 26 and 27 winning 4-2 in Wilkes-Barre and pulling off a 5-4 overtime win at PPL Center the next night. Felix Robert scored his first two pro goals in consecutive nights against the Phantoms. Frederick Gaudreau scored the OT winner in the Feb 27 game. Max Willman has scored three goals against Wilkes-Barre/Scranton including a two-goal effort on Saturday, February 27 in Allentown. The Phantoms are 0-1-1 against the Penguins this season.

Last Time Out – The Phantoms lost against Hershey for the first time out of four encounters as the Bears pushed through with a 4-1 win on Saturday afternoon in Chocolate Town. Three goals early in the second period within a stretch of just 2:01 pushed the Hershey advantage from 1-0 to 4-0 very quickly and induced an early exit from starting goalie Felix Sandstrom. Axel Jonsson-Fjallby scored twice for the Bears. Chris Mueller deflected a point-shot by Tyson Foerster with barely over a minute remaining to break the shutout bid of Hershey’s Zach Fucale.

Get Your Tickets, Here!! – The Phantoms and PPL Center are pleased to announce they are “Back to Live.” Lehigh Valley Phantoms home games at PPL Center will now be held at 15% capacity. Tickets for all home games will go on sale to the general public on Tuesday, March 9 at 11:00 a.m.

Welcome Back – The Phantoms lineup has been bolstered by the return of a trio of players last week. Samuel Morin joined the Phantoms from the taxi squad and is back at defense after beginning the season learning the ropes of playing left wing. Tyson Foerster returned to action on Wednesday, March 3 after missing almost a month following a fractured shin in the season opener on February 6 at Hershey. Foerster recorded his first professional point with an assist on Saturday, March 6 at Hershey. Isaac Ratcliffe made his season debut on Wednesday, March 3 after an injury on New Year’s Eve, right before training camp, resulted in surgeries to repair a fractured rib and collapsed lung. The second-year pro recorded an assist in his first game of the year.

Max Effort – 26-year-old winger Max Willman was named the CCM/AHL Player of the Week on March 1 for his tremendous stretch that included a pair of multi-goal games, an overtime winner, and five goals in three games in total during the previous week. Willman also had a four-game goal streak dating back to the previous week which is equal to the longest in the AHL this season. Willman is a second-year pro but is still technically an AHL rookie having played 24 games with the Phantoms last season thus falling short of the official non-rookie threshold of 25 AHL games entering this season. Willman is the first Phantom in five years to win the AHL Player of the Week honors. Colin McDonald was the last to be so honored on January 21, 2016 shortly after a five-point game that included a hat trick as part of a ten-point week. Two Phantoms players won the award in the team’s inaugural season in Lehigh Valley; Nick Cousins on March 15, 2015 and Scott Laughton on October 21, 2014 after scoring the first official goal at the brand new PPL Center.

Special Teams – The Lehigh Valley Phantoms penalty kill remains tops in the league giving up just one man-advantage tally in 25 chances for a 96% success rate. Hershey is second in the conference at 89.7%. The Phantoms have killed 12 straight since the only power-play goal they have surrendered this season on February 24 at Binghamton. Meanwhile, the Phantoms’ power play has been heating up after a sluggish start going 3-for-12 in the last three games including a pair of power-play markers against the Penguins on Saturday, February 27. Zayde Wisdom leads the team with two power-play goals. The WBS power play is clicking at 20.8% (8-for-39) which is 10th in the AHL. They P.K. is 15th out of 28 at 80.6%.
WBS is 0-for-4 against the Phantoms while Lehigh Valley has gone 2-for-9 against the Penguins.

Best in the League – The Phantoms boast the two highest scoring active players in the AHL. Cal O’Reilly is first with 617 points while Chris Mueller is second among all active AHL players with 568 points and is first with 242 goals. The 35-year-old Mueller also leads all active AHL’ers in games played with 779. Mueller has won the Calder Cup twice (Toronto 2018 and Texas 2014) and also won an NCAA Frozen Four title with Michigan State.

Let’s Stay Late – The Lehigh Valley Phantoms have played five overtimes in nine games to lead the AHL in extra-period hockey. Lehigh Valley is tied for the most overtime wins (3) and also the most overtime losses (2). The Phantoms also went to overtime in each of its first four away games before the streak finally ended on February 26 at Wilkes-Barre/Scranton. Ryan Fitzgerald, David Kase and Max Willman have scored overtime winners for the Phantoms while Binghamton’s Brett Seney and Wilkes-Barre/Scranton’s Frederick Gaudreau have victimized the Phantoms in the 3-on-3 session.

Scouting the Penguins – Wilkes-Barre/Scranton played a strange, see-saw game at the Binghamton Devils on Saturday night falling behind 3-0 in the first before rallying back with six unanswered to take the 6-3 win including four straight in the second period. Jon Gruden’s first pro goal was the equalizer and a go-ahead marker for Jon Lizotte in a run that included three power-play goals. Wilkes-Barre/Scranton out shot the Devils 43-21 and went 3-for-7 on the power play. After just one win in its first four, the Penguins have gone on a five-game point streak with a 4-0-1 mark in that stretch.
Pierre-Oliver Joseph is back with Wilkes-Barre/Scranton from the Pittsburgh taxi squad. The former first-rounder of Arizona joined the Penguins in June, 2019 along with Alex Galchenyuk in the Phil Kessel trade. His brother is Mathieu Joseph of the Tampa Bay Lightning. Rookie left wing Drew O’Connor also came down to the Baby Pens to receive additional playing time and scored his first pro goal in his pro debut on Saturday. The Dartmouth College product played nine games with Pittsburgh to begin the season.

Upcoming – The Phantoms continue their road-swing on Monday evening at 5:00 p.m. at Wilkes-Barre and Wednesday night at 7:00 p.m. at the Binghamton Devils. Lehigh Valley returns to PPL Center on Saturday, March 13 against Binghamton. Tickets go on sale Tuesday, March 9 at 11:00 a.m.