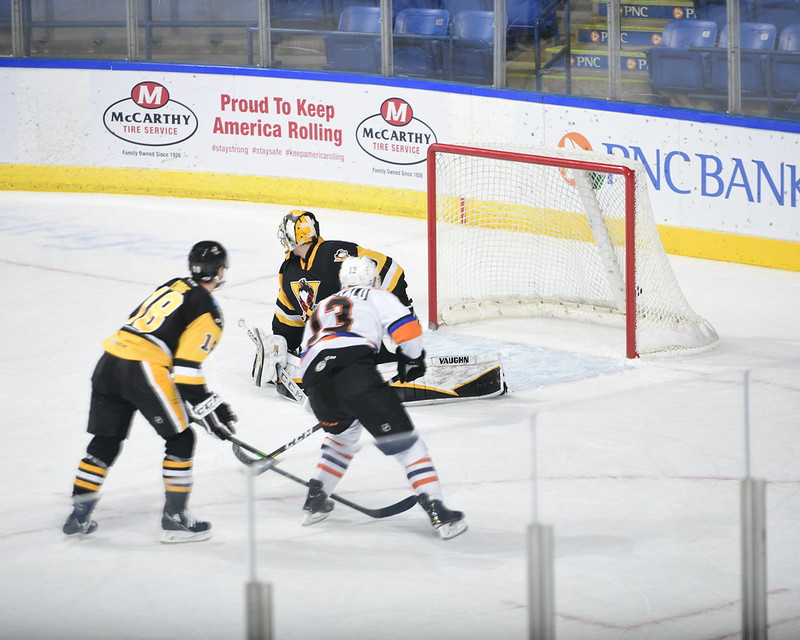 Wilkes-Barre, PA – Ryan Fitzgerald scored his second overtime goal of the season as the Lehigh Valley Phantoms prevailed for a league-leading fourth time in overtime games in a 4-3 thriller at Wilkes-Barre on Monday evening.

Fitzgerald sped up to the right circle and turned the puck to his left-handed forehand to blast the winning shot off the left post and in following a nifty poke-check by Isaac Ratcliffe at the Phantoms’ line to begin the play. 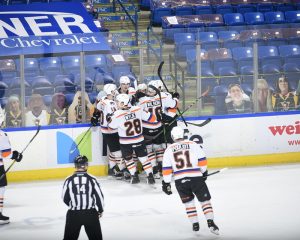 Lehigh Valley (6-2-2) has played to overtime on six occasions in its ten games this season, most in the AHL. Fitzgerald (4th) also scored the overtime winner on February 6 at Hershey in the season opener on a similar laser-beam of a shot but from the left circle. All four of Lehigh Valley’s overtime victories have been on the road with two triumphs at Hershey, one at the Binghamton Devils and this one at the Wilkes-Barre/Scranton Penguins.

Brennan Saulnier (1st), Garrett Wilson (1st) and Pascal Laberge (2nd) all scored for the Phantoms as well while Zane McIntyre (5-1-1) turned in a strong 32-save effort for the win.

Brennan Saulnier recorded his first career AHL goal capping a 3-on-1 rush with a top-shelf blast from the right circle on a sequence that included David Kase and Ralph Cuddemi on the assists. The Phantoms had the better of the play in the opening frame and a 10-8 shots advantage 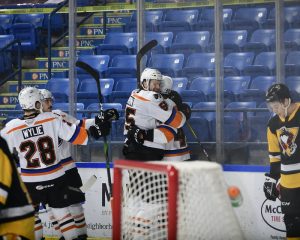 Lehigh Valley boosted its lead to 2-0 on a nice play by defenseman-turned-forward-turned-defenseman-again Sam Morin, who looked like a forward again when he was up with the play and on the right of the cage spotting an open Garrett Wilson on the backdoor who buried his opportunity into a mostly open net. Wyatte Wylie had identified Morin up on the rush and received a secondary assist on the play.

Wilkes-Barre/Scranton (5-2-3) responded 62 seconds later with a controversial goal poke in by Tim Schaller at the net-front after McIntyre felt he had covered and frozen the puck. Despite the protestations of the Phantoms netminder, the Penguins had gotten on the scoreboard and also started to gain a modicum of momentum. Josh Currie ripped a tying goal from the high slot after Drew O’Connor was hooked on a partial breakaway driving to the net. Currie’s third of the year came during the delayed penalty with the Penguins pulling goalie Shane Starrett.

Lehigh Valley had a strong power play at the end of the second period in efforts to regain the earlier energy they had at the start. Several close calls were repelled by Starrett and Penguins’ penalty killers keeping the game tied at 2-2 into the second break.

Pascal Laberge hustled up ice on a 2-on-1 that quickly evaporated but Linus Hogberg and Egor Zamula rapidly worked the puck down low for point-blank chances by Wilson and Tanner Laczynski that were somehow denied by spectacular Starrett stops. But the Penguins’ goalie was mostly out of the play when Laberge found the puck on his stick between the circles. He converted into the top half of the net for a 3-2 lead with just 6:53 left as Laberge returned to the lineup after a two-week layoff with an injury to score in back-to-back games. He had also scored on February 24 at the Binghamton Devils before getting hurt later in the contest. 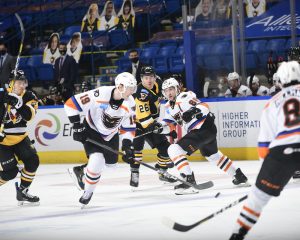 Wilkes-Barre/Scranton roared back to equalize against the Phantoms’ league-leading penalty kill on a flurry of shots that eventually led to Currie blasting a right-circle drive off the right shoulder of McIntyre that was collected by Schaller and poked in for his second goal of the contest and a tied game again at 3-3 with just 4:13 left.

Lehigh Valley had the better of the play in overtime and picked up yet another 3-on-3 victory with Isaac Ratcliffe winning the puck back in the Phantoms’ zone with a nifty poke-check that found Fitzgerald who was ready to drive home yet another winner for the Phantoms.