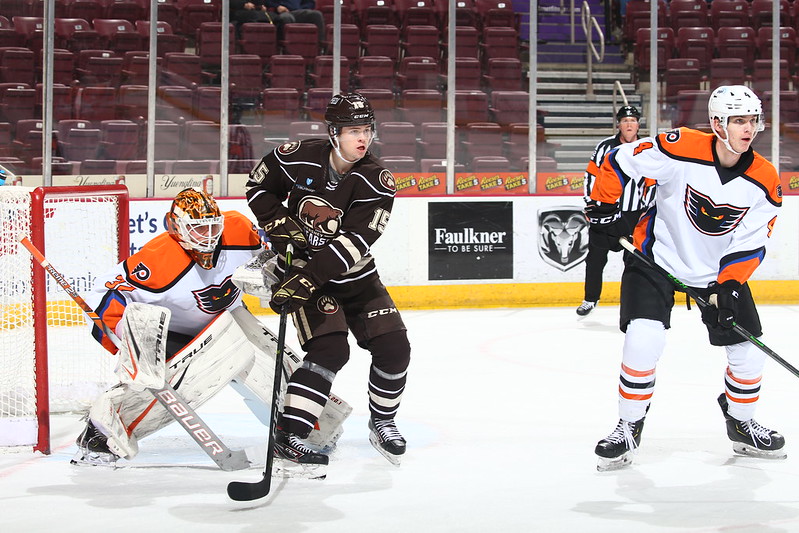 Hershey, PA – The Hershey Bears used a stretch of three goals in 121 seconds early in the second period to turn a 1-0 advantage into a more comfortable lead in dispatching of the Phantoms 4-1 on Saturday afternoon at Giant Center. Chris Mueller (1st) scored late in the game on his 35th birthday to break Zach Fucale’s shutout bid while Tyson Foerster’s shot-pass earned the 2020 first-rounder his first career point and assist.

Lehigh Valley (5-2-2) lost in regulation for just the second time in nine games this season and fell to Hershey for the first time in four meetings.

The motivated Hershey squad (6-2-2) benefitted from a pair of goals by Axel Jonsson-Fjallby (2nd, 3rd) against former Swedish teammate Felix Sandstrom. Mike Sgarbossa (5th) and Kale Kessy (1st) also tallied for Hershey in the back-end of this home-and-home series.

Sandstrom withstood a significant challenge at the outset of the game with some strong denials of quality Hershey opportunities before the two teams settled into a tighter and more physical affair.

Jonsson-Fjallby made it goals in back-to-back games against the Phantoms with his long slapper from the blue line to the upper-left corner going off the post and in for a 1-0 Bears advantage at 18:22 into the first period. Shots in the opening frame were in favor of the Bears 6-3 but the teams each only had one shot on goal after the opening five minutes of the period. 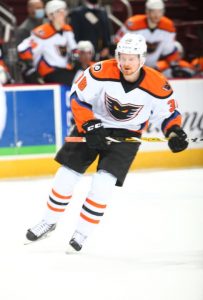 Lehigh Valley killed a Hershey power play at the outset of the second period but the Bears scored again shortly after play returned to 5-on-5 with Jonsson-Fjallby collecting a rebound at the net-front to deposit it past Sandstrom for a 2-0 advantage.

Just over a minute later, a long lead-pass broke the Phantoms forecheck efforts and sprung Hershey on a 2-on-1 with Mike Sgarbossa dangling around Sandstrom with a backhander flipped past the goalie’s left skate for a 3-0 lead. Zane McIntyre entered the game at that point to take over for Sandstrom.

The new Phantoms goalie was just getting warmed up when Hershey would strike again less than a minute later with a blocked puck bouncing out to tough-guy Kale Kessy in the slot who fired home his first AHL goal in three years to boost Hershey’s advantage to 4-0.

Zach Fucale was just barely a minute away from his second consecutive shutout when David Kase won a faceoff to open a power play steering the puck to Tyson Foerster whose point-shot was tipped between the legs of Mueller who had his back turned to the goal. Mueller’s goal, on his 35th birthday, is his 242nd all-time in the American Hockey League which is most among all active players.

The Phantoms continue their road-trip with games at the Wilkes-Barre/Scranton Penguins on Monday at 5:00 p.m. and at the Binghamton Devils on Wednesday at 7:05 p.m. Catch all the action on the Phantoms 365 app and on 1470-WSAN.

The Lehigh Valley Phantoms return home next Saturday night taking on the Bingamton Devils at 7:05 p.m. Tickets for all upcoming Phantoms home games go on sale to the general public beginning on Tuesday, March 9 at 11:00 a.m.
Scoring:
1st 18:22 – HER, A. Jonsson-Fjallby (3) (R. O’Gara, C. McMichael)