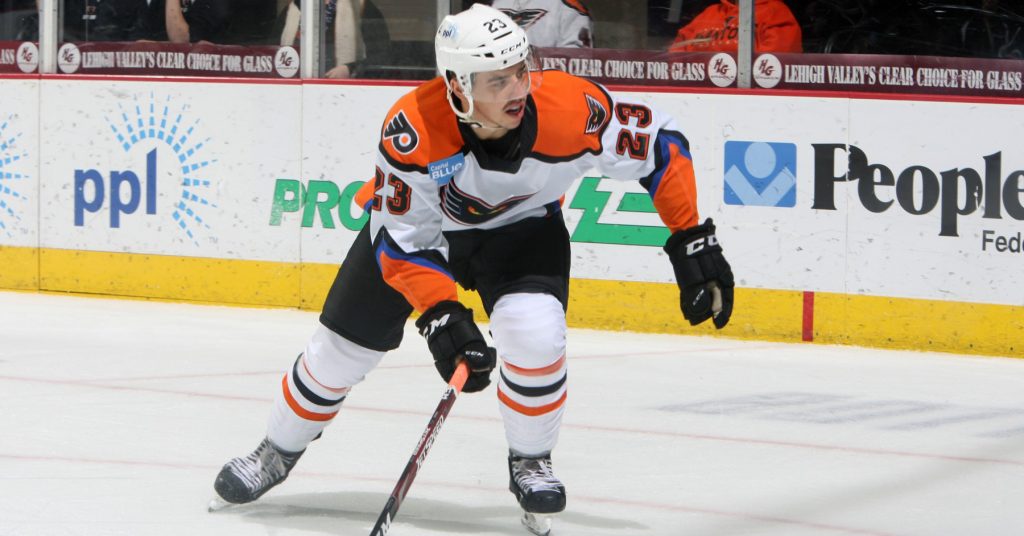 Lehigh Valley, PA – The Phantoms got off to an exciting start in Ian Laperriere’s first game at the PPL Center bench rallying from a 3-1 deficit to post a thrilling 4-3 overtime win over the Wilkes-Barre/Scranton Penguins on Saturday night.

Morgan Frost tied the game in the third period with a 6-on-5 goal on a delayed penalty and then won the game just 16 seconds into overtime on a give-and-go with fellow first-rounder Tyson Foerster.

18-year-old Samu Tuomaala sped past the Penguins’ defense for a sensational goal in the second period. He finished with a goal and an assist as he and Isaac Ratcliffe set up Frost’s goal in the third. Tuomaala’s goal in the second certainly caught the attention of Phantoms fans as he scooped up a free puck in front of his own goal and took it coast-to-coast burning up the right wing and speeding past a couple Penguins players who were undoubtedly caught off-guard by his tremendous skating.

Max Willman had a sharp-angle snipe on a speedy rush up the left wing in the first period to account for the initial Phantoms goal.

Goalie Sam Ersson was terrific in net with 32 saves on 35 shots as he backstopped a penalty-kill that held the Penguins to 1-for-9 on the power play. Wilkes-Barre/Scranton had three extended stretches of 5-on-3 and one of those accounted for thier lone man-advantage goal of the evening. On the initial 5-on-3 for the Penguins in the first period, Ersson made eight consecutive 5-on-3 denials in a 1:30 stretch to raucous approval from the home fans.

Lehigh Valley also went 1-for-9 on the power play in the penalty-filled game that saw a minimum amount of 5-on-5 hockey.

Pierre-Olivier Joseph scored from the high slot in the first period for the 5-on-3 strike for the Penguins a couple minutes after Willman’s goal. Kasper Bjorkqvist buried it in the slot after a fizzled-out 3-on-1 rush turned into a scramble in front of the net. And Nathan Legare buried a shorthanded top-shelf strike on a breakaway in the second period that had given the Penguins a 3-1 lead.

But the Phantoms stayed with it and found their stride and eventually turned the game to their favor after giving up a 16-7 shot disparity in the first period mostly due to four Wilkes-Barre/Scranton power plays.

The preseason continues Sunday evening at Hershey with a preseason clash against the Bears at 5:00. Pregame show coverage commences at 4:30 on 1470-WSAN and the Phantoms 365 app.

The Phantoms wrap up the preseason on Wednesday night at PPL Center hosting Hershey for the fourth, and final, exhibition game encounter before the games will count “for real.”

The 2021-2022 regular season at PPL Center will kick off with “Opening Weekend” October 22-24 beginning with the U.S. Women’s National Team taking on Canada on Friday, October 22 in the “My Why” tour followed by the first Phantoms’ home games of the season against the Hartford Wolf Pack and Wilkes-Barre/Scranton Penguins on October 23-24.
Opening Weekend Tickets Click HERE!