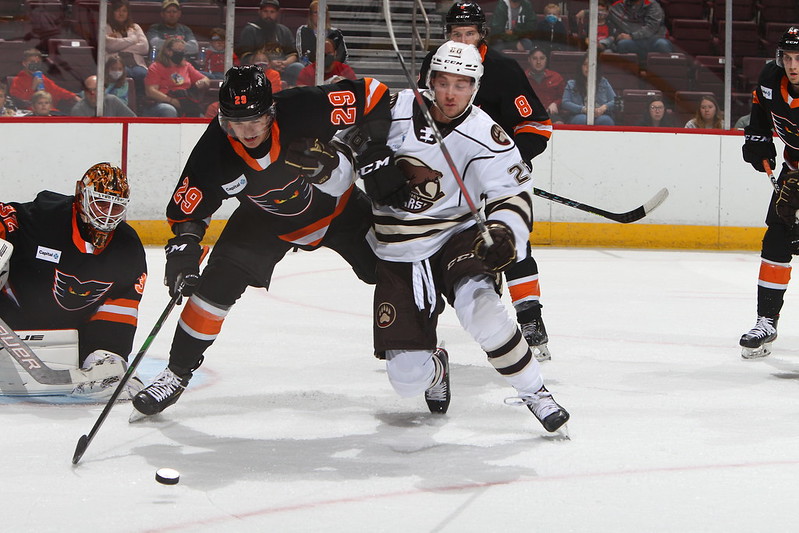 Hershey, PA – The Lehigh Valley Phantoms spotted Hershey a 3-0 lead on Sunday evening before putting together a strong comeback effort that they couldn’t quite finish in a 3-2 preseason loss in Chocolatetown.

Wyatte Wylie and Linus Sandin scored for the Phantoms. Max Willman came close to equalizing in the closing seconds but missed just past the left post as the Bears hung on for the victory.

Felix Sandstrom played two periods and made 28 saves on 31 shots. Sam Ersson came on for the third period and stopped all five shots he faced.

The Bears raced out to a 2-0 lead in the fhrist period on goals by Mike Sgarbossa and Dylan McIlrath as the hosts enjoyed a 22-1 shot advantage. Felix Sandstrom made 20 saves on 22 shots to keep Lehigh Valley within striking distance.

Brennan Saulnier dropped the glvoes with Dylan McIlrath to open the second period in efforts to spark things for the Phantoms. The strategy worked as Lehigh Valley enjoyed better possession and opportunities against Bears goalie Pheonix Copley shortly after. But Copley made the stops when he was finally tested and Eddie Wittchow eventually extended the lead to 3-0 in the second period.

Wylie got the Phantoms on the board with under two minutes left in the second period on his strike from the left circle set up by Bunnaman.

Lehigh Valley narrowed the margin to a single goal midway through the third when Foerster’s blast from the high slot hit off the glove of Copley and bounded to his right. Sandin was there at the left of the cage to convert on the opportunity past the outstretched leg of Copley scrambling to recover.

Hershey out shot the Phantoms 36-12. Hershey was 1-for-6 on the power play while the PHantoms finished at 1-for-5.