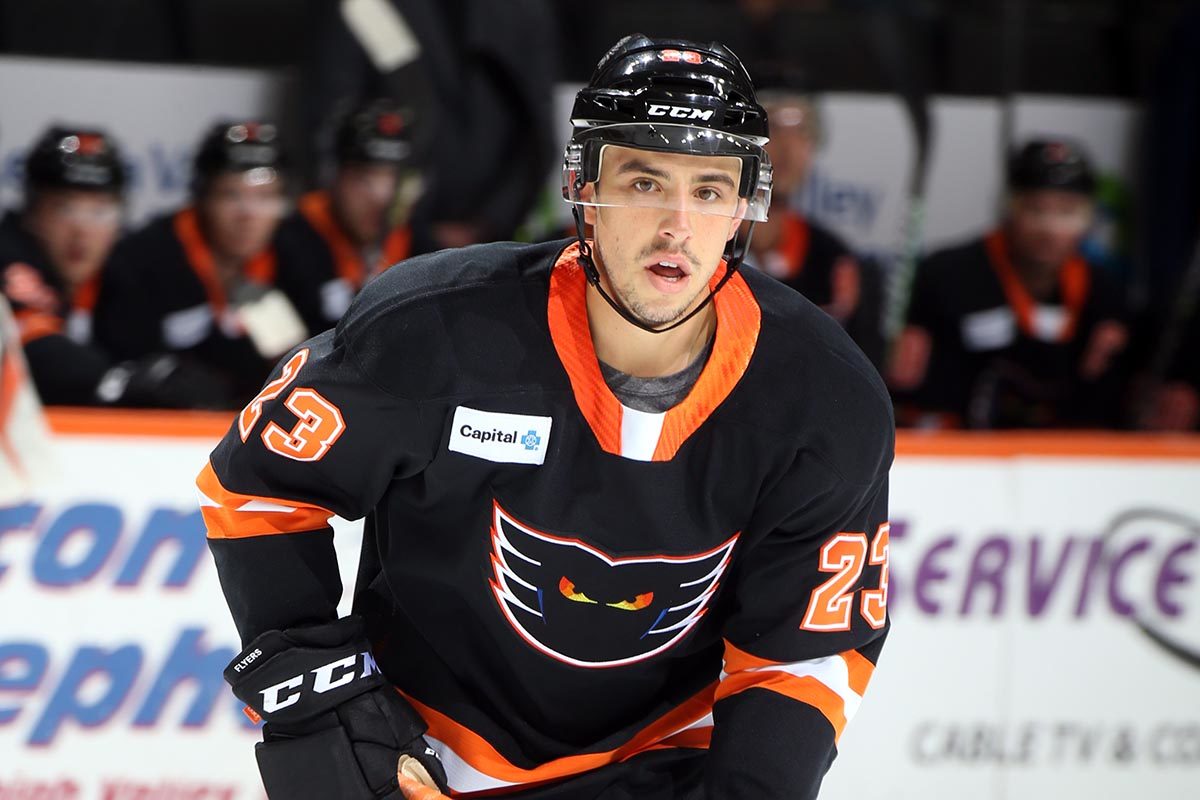 Morgan Frost did not make the Philadelphia Flyers out of training camp.

And it is fair to say that Frosty was not exactly “a jolly, happy soul.”

But a shoulder injury with the Flyers in the second game of the 2020-21 season and then the subsequent surgery left the 2017 first-round draft pick a bit rusty. Playing barely two games in about 20 months can do that.

Things had been going very well for the talented, young center. With an AHL All-Star Classic appearance as a top scorer on the Lehigh Valley Phantoms as a rookie in 2019-20 — during a season in which he also played in 20 NHL games with the Flyers — it very much appeared the sky was the limit for Frost’s future. Then came the COVID pandemic and the delayed start to the 2020-21 season putting the brakes on pretty much everything.

Still, when hockey resumed, Frost impressed in Flyers training camp and made the team’s opening night roster. That initial early-season excitement turned sour very quickly when his season ended before it had barely even started.

Shoulder surgery and rehab ultimately led to a return trip to the Phantoms this season, where Frost has undergone an exercise in finding his top form again as well as his timing.

“And when they placed the stick into his hands he began to dance around.”

But Frost didn’t suddenly “come to life one day.” It has been more of a gradual progression with steady improvement along the way. His improved game has come from a higher compete level and not a “corn cob pipe and a button nose.” It’s been more about moving his feet and not “two eyes made out of coal.”

“It’s starting to pick up for sure,” Frost said. “Obviously not playing for so long was tough. I think I was in really good shape coming into camp and I felt good. But it’s hard to recreate anything you do during the season in the summer. Just trying to get up to speed and get my timing. I think in camp I wasn’t creating enough offensively which is obviously my forte. I think it was being a step behind and just kind of losing touch with the game a little bit after not playing for so long. So it’s nice to be playing a lot of minutes and having a good time out here.” 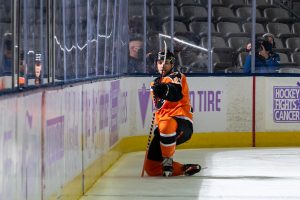 On Nov. 13, it was Frost’s compete level and active stick on the penalty kill when he hounded a pair of Springfield Thunderbirds on the blue line to eventually knock the puck free and thread a perfect pass across a pair of sticks to connect with Max Willman on the rush for the team’s league-leading fifth shorthanded goal of the season.

“Honestly, I was just kind of whacking at it and it kept hitting skates,” Frost said of the puck battle. “Hitting my skate. Hitting their skate. I was spinning around and getting kind of dizzy. Then eventually it bounced out and I saw an opportunity and I just skated as fast as I could down the ice. And it’s never much of an issue for Max Willman to get down the ice. He’s a pretty speedy guy. So he caught up to me and I think I made a pretty good play and he made a great play to finish it.”

Getting to those opportunities and retrieving and winning those available pucks is a significant step forward in Frost’s efforts to become the more complete player the Flyers want him to be.

“I think that’s probably one of the weaknesses of my game,” Frost admitted. “I’m just trying to do that a little better. That’s such a huge part of hockey that sometimes people may not see from the outside — those one-on-one battles. It’s not always about putting up points or making nice plays. The battles are almost more important than that. I’m just trying to get better at that, play a little harder, and hopefully that will get me back up with the Flyers.”

Phantoms head coach Ian Laperriere is pleased with the progress he has seen out of Frost’s game particularly in his decisions with the puck and his overall compete level.

“He’s assertive on the puck. He’s very direct,” Laperriere said. “I do want him to be creative. I want him to make the play when the play is there. But, at this level, if the play isn’t there right away then it won’t appear. If you don’t (have a play) then let’s play the odds. And he’s been doing that. He’s been strong and he’s been smart with the puck. The biggest difference from a month ago is that he’s engaged in the battle. He doesn’t go one-and-done. That goal was on the PK, but that’s also what he does 5-on-5. He’s in the battle and he stays in the battle. He doesn’t just hope that the puck is going to come out. He stays in it. That pass (to Willman) was amazing but I’m more proud of him with the battle he did before he made that play.”

Morgan Frost was all over it setting up Max Willman on ANOTHER shorthanded goal. The Phantoms have FIVE shorties, most in the AHL. pic.twitter.com/dzeTIDIcNO

Phantoms assistant coach Riley Armstrong said it is the kind of mentality they reinforce with Frost on a regular basis.

“Definitely something that we talk about with him on a daily of being first on the puck and hunting and hounding that puck to get it back,” Armstrong said. “I think he’s best when he’s moving his feet and when he is skating with and without the puck. When he is doing that he’s a head above other guys in this league.”

Lately, it has also been about simply shooting the puck. Frost has a good shot but often will opt to look for a great pass instead. But developing more of a shooter’s mentality has resulted in some good chances for himself while the added threat also has been opening up more playmaking opportunities to set up his teammates. More recently, Frost’s shots have been finding the back of the net on their own with goals in back-to-back games last weekend.

Goals in back-to-back games for @_morganfrost_10 . He loves to pick that upper-right corner! pic.twitter.com/PKC1bEEAGG

“I know he loves to pass and he’s a good passer,” Armstrong said. “But you always want to have a little bit of a double threat. When he shoots the puck a little more there’s that confidence. And once they go in then he slowly gains that confidence back and you’re going to see him shoot the puck a lot more.”

Last weekend’s game in Toronto was a homecoming for the native of Aurora, Ontario. It was Frost’s first visit north of the border since August, and a chance to see his family and friends, albeit briefly. He scored his second goal of the weekend in that game and against the organization his dad used to work for: radio host Andy Frost had been the long-time public address announcer for the Toronto Maple Leafs and used to bring a young Morgan to games where he would watch from the press box while Dad worked the microphone a few feet over.

The NHL dream had begun for Morgan at a young age.

“I’d look down out of my booth doing the P.A. and Morgan would be taking notes during warmups,” Andy Frost remembered. “I could tell he took it really seriously and he found it really interesting. He’d come down with me and have the media meal with me. He’d look in the dressing room and he’d look at the row of sticks and he was pretty enthralled by the whole thing. That combined with all of the other things, including his own ability, you can tell he was very interested in what was going on.”

Morgan’s number one fan has his own thoughts on the progress his son has made in the opening weeks of the AHL season.

“He’s shooting more,” Andy said. “And I think somebody spoke to him or he figured out on his own that ‘maybe I should shoot more.’ He’s got a very good shot. Not only is it hard but it’s accurate. The key is confidence. You can tell by watching him he’s a much more confident player then he was previously. He’s playing a confident brand and style of hockey.”

Frosty the Playmaker is using that confidence to lead the Phantoms in scoring which also has him potentially on the verge of another opportunity with the Flyers. If you listen closely you might hear him say, “Don’t you cry. I’ll be back again some day!”