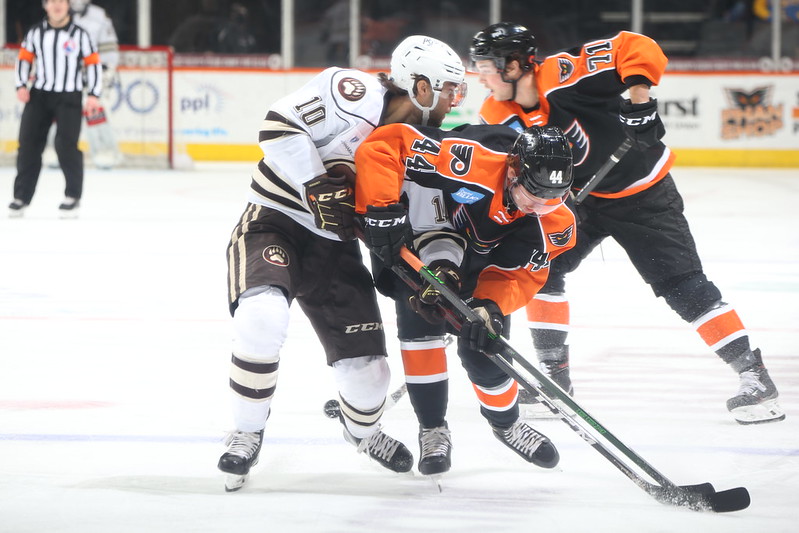 Lehigh Valley, PA – Tyson Foerster had one goal and two assists while Cam York had a goal and an assist in a 5-3 win over the Hershey Bears on Wednesday night at PPL Center.

The Flyers’ first-rounders from 2019 (York) and 2020 (Foerster) led the way and also teamed up on the winning goal on the power play in the third period. With the game tied at 3-3, Foerster took a drop-pass from York at the Phantoms’ blue-line. Then York was off to the races to split the D up the middle accepting a long stretch-pass from Foerster that was right on the tape for the electrifying play and breakaway goal. 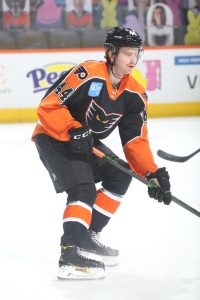 In the second period, Foerster had given the Phantoms a 3-2 lead with a deflection goal at the net-front on the power play on a Cam York shot from center-point. Foerster said he didn’t necessarily mean to do it and the puck went in off his shin-pad. York joked that Foerster took a goal away from him…before later helping him with his own goal. Either way, the two young talents have quickly developed some chemistry in just York’s sixth game with the team. 19-year-old Foerster and 20-year-old York are showing themselves to be exciting future pieces for the Philadelphia Flyers.

The “old guys” helped out as well. With 35-year-old Chris Mueller scoring his third goal and 244th of his AHL career, which is most among active AHL players. And 34-year-old captain Cal O’Reilly contributed his fourth while also tacking on his 501st career assist in the AHL. Linus Hogberg also scored his second of the season while Felix Sandstrom had his fourth consecutive solid outing with 34 saves on 37 shots.

Lehigh Valley (16-6-4) pulled to within one game of Hershey (20-7-2) in the North Division points-percentage race. If the Phantoms win in regulation on Saturday at Hershey they will squeak ahead of the Bears in the standings.

The Bears struck early on an entry from the right-wing by Brett Leason that was blocked down in front of Sandstrom that was then popped in for a quick turn-around goal by Philippe Maillet (5th) just 24 seconds into the game.

But the Phantoms quickly responded with goals at 4:23 in and then 7:07 in. Linus Hogberg had an intercept and walked up to the left dot to rifle a perfect shot from the left circle to the upper-far corner to tie the game at 1-1.

Then Chris Mueller was open for a chip on the backdoor on a deflected shot from Linus Sandin in the left circle on a play also assisted by Derrick Pouliot.

Damian Riat scored on the backdoor at 16:33 into the game on some impressive vision by Brett Leason spotting him open across the slot to slam it home.

Sandstrom made a number of strong stops among his 15 saves in the period including a breakaway denial at the end of the first period falling forward but still able to reach up with the glove to get the backhand chip attempt that would have put the Bears back in front. 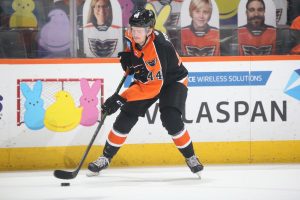 The Phantoms took the lead just two minutes into the second period on Foerster’s team-leading 10th goal of the season deflecting a Cam York center-point slap shot on the power play. Foerster said the goal went in off his shinpad.

Hershey came back to tie it again with 2:06 left in the second period on the rush with Capitals’ first-round Connor McMichael connecting with Axel-Jonsson-Fjallby whose first try on the partial breakaway was thwarted on an impressive stop with the right pad for Sandstrom. But the rebound try to that side was pounced on by Jonsson-Fjallby who converted from the sharp-angle while he was barely still in front of the goal.

The Phantoms took the lead again with exactly 12:00 remaining in the third period when Sandstrom handed the puck off to York to begin the power-play breakout. It was “trick play” time for the Phantoms with York dropping the puck at the Phantoms’ blue line to Tyson Foerster and then waiting for his moment to burst ahead past everyone and receive the stretch-pass from Foerster for the electrifying go-ahead breakaway goal. Sandstrom received credit for an assist o the play for his point in the AHL.

Foerster finished his three-point night with 5:50 to go when he looked like he was about to shoot from the right circle but instead connecting with a cutting Cal O’Reilly up the middle who received the Foerster connection perfectly on the tape for the backhand deflection and some valuable breathing room in the two-goal lead.

The Phantoms are 6-4-0 against Hershey this season and the two Keystone State rivals will wrap up their season series on Saturday at 4:00 p.m. at Giant Center in Chocolate Town. The Phantoms return home for a Mothers’ Day showdown against the Wilkes-Barre/Scranton Penguins on Sunday, May 9 at 3:05 p.m.

The Phantoms return to PPL Center on Wednesday night hosting Hershey and will be back again on Mothers’ Day, Sunday, May 9, for a 3:05 p.m. clash against the Wilkes-Barre/Scranton Penguins.

Tickets for the three remaining Phantoms home games at PPL Center are available at phantomshockey.com