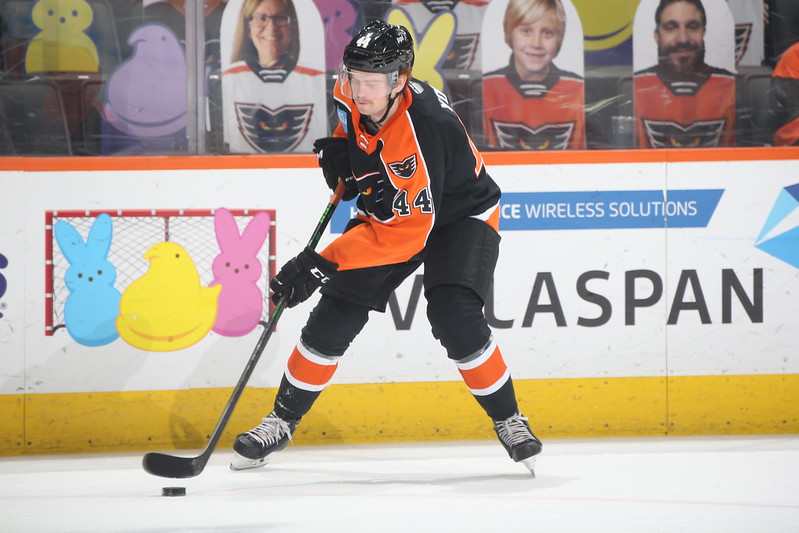 Lehigh Valley, PA – The Philadelphia Flyers have announced that defenseman Cam York and goalie Felix Sandstrom have been recalled from the Lehigh Valley Phantoms to the Flyers’ Taxi Squad.

York, 20, is in his first professional season. The Flyers’ first-round pick in 2019 joined the Phantoms from the University of Michigan following his sophomore season in which he won Big Ten Defenseman of the Year honors. York has scored two goals and three assists for five points in six games with Lehigh Valley.

The Anaheim Hills, California product scored the game-winning goal on a power-play breakaway in the third period on Wednesday receiving a perfect stretch-pass from Tyson Foerster to break a 3-3 tie against Hershey. York’s first pro goal came on April 26 at the Binghamton Devils as part of a three-point game. Sandstrom, 24, is in his second pro season in North America. The Gavle, Sweden native has started nine games with the Phantoms going 4-3-2, 3.45,  .897. In his last four starts, Sandstrom has been especially strong going 2-1-1 with a 2.00 goals-against average and a .947 save percentage with eight goals allowed on 151 shots. He has 32 or more saves in each of his last four starts.

Sandstrom was a Round 3 selection of the Philadelphia Flyers in 2015.

The Phantoms return to action this Saturday at 4:00 p.m. at the Hershey Bears and will be at home on Mothers’ Day on Sunday, May 9 taking on the Wilkes-Barre/Scranton Penguins at 3:05 p.m. Tickets for the Phantoms’ three remaining home games are available HERE.