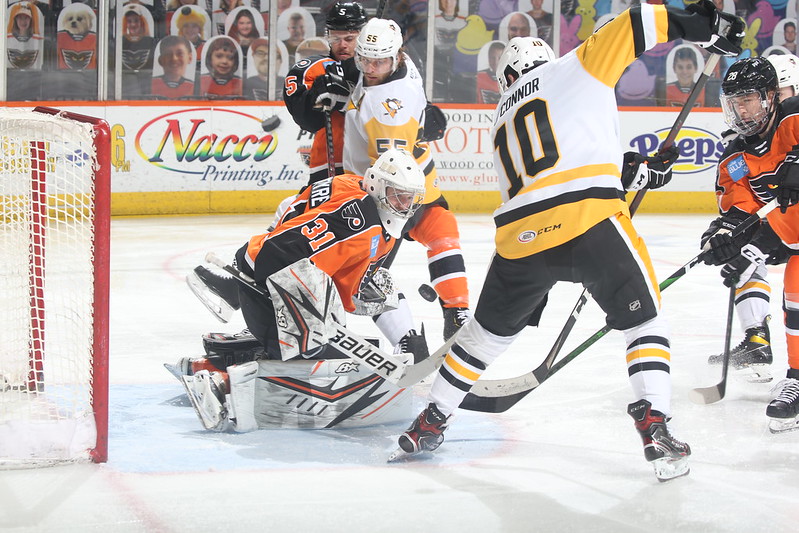 Lehigh Valley, PA – Tyson Foerster had his second consecutive two-goal game and then score the shootout winner on a nifty backhand move as the Lehigh Valley Phantoms pushed past the Wilkes-Barre/Scranton Penguins 5-4 on Saturday night at PPL Center.

The Phantoms trailed for almost the entire third period but kept on coming and eventually came through with Foerster’s blast from the left dot with just 48.9 seconds left to send the team to its league-leading eighth overtime game of the season.
Four of the five meetings between the Phantoms and Penguins have gone to extra hockey.

For the first time all year, the Phantoms would make it through to the end of an overtime without a decision meaning the team would have its first shootout of the season. Foerster’s backhand move past the lefty-style goalie Alex D’Orio in the first round was the only scoring in the shootout as Zane McIntyre (8-1-1) turned aside all three Penguins shooters.

Lehigh Valley (12-3-2) won its fourth straight and made it seven wins in the last eight games as the Phantoms solidified their hold on the top spot in the north division.

The Phantoms improved to 3-1-1 against Wilkes-Barre/Scranton (6-7-5) who have just one win in its last nine games. 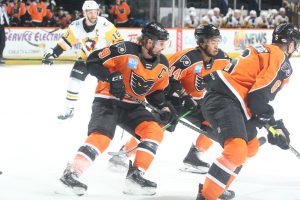 The two teams traded goals at a rapid pace in a see-saw first period that saw five lamplighters total. Cal O’Reilly was trying to pass the puck when a kick by Penguin goalie Alex D’Orio came back to him for a rebound opportunity and his third goal of the season at 4:47 into the game.

Wilkes-Barre/Scranton tied the game just 56 seconds later on a rebound put-back for Felix Robert who has scored all three of his goals this season against the Phantoms.

Drew O’Connor (4th) sniped top shelf from the right dot for a power-play goal at 10:35 into the period to push the Penguins ahead 2-1.

But the Phantoms quickly had their own response just 58 second later with Tyson Foerster almost whiffing on a shot from the left circle ut getting just enough to send a change-up bouncer to the net with D’Orio rotated to the other side. The Penguins goalie inadvertently kicked the puck into his net in his attempt to recover.

Wilkes-Barre/Scranton against took the lead with just 20.5 seconds left in the first period on a power-play goal by Pierre-Olivier Joseph (1st) firing top self from the top of the left circle shortly after an impressive backhand keep at the point by Drew O’Connor.

The Penguins cranked up 17 shots in the opening frame which is the most the Phantoms have allowed in a single period all year. Lehigh Valley also gave up two power-play goals in a game for the first time this season with both strikes coming in the first period.

Wilkes-Barre/Scranton extended its lead at 14:59 into the second period on an intercept by Jan Drozg (5th) which he turned into an unassisted top-shelf conversion to the far-90 to give the Phantoms a 4-2 advantage. 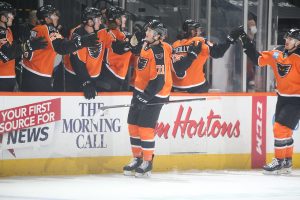 That’s when the Phantoms went to work in their comeback efforts. Just 100 seconds later, Wade Allison (4th) put on a move in the slot and shot a little against the grain to go to the right-side of the cage to make it a one-goal game.

Still trailing 4-3 late in the game but generating good chances, Scott Gordon opted to pull his goalie with 2:45 left on an offensive-zone faceoff. The Phantoms won the faceoff and the Penguins only had one clear the rest of the way and no other possession. Eventually, Max Willman sped down low and Connor Bunnaman Found Foerster open in the left circle. The snappy puck-movement at 6-on-5 led to the tying goal with just 49.9 seconds left an another exciting comeback was developing yet again.

This time it would take the shootout after an exciting overtime that saw two strong chances for each side. McIntyre made a stick save on Radim Zohorna in the third round to seal the win and cap a 32-save night that also included denials of all three shootout participants.

The Phantoms return to action on Monday night with an away game against the Binghamton Devils in Newark, N.J. The Phantoms have a weekend homestand next week that will include increased capacity allowance to 25%. Lehigh Valley hosts the Hershey Bears on Saturday, April 10 at 7:05 p.m. and then hosts the Binghamton Devils on Sunday, April 11 at 5:05 p.m. Tickets for all upcoming home games are available at PhantomsHockey.com and PPLCenter.com