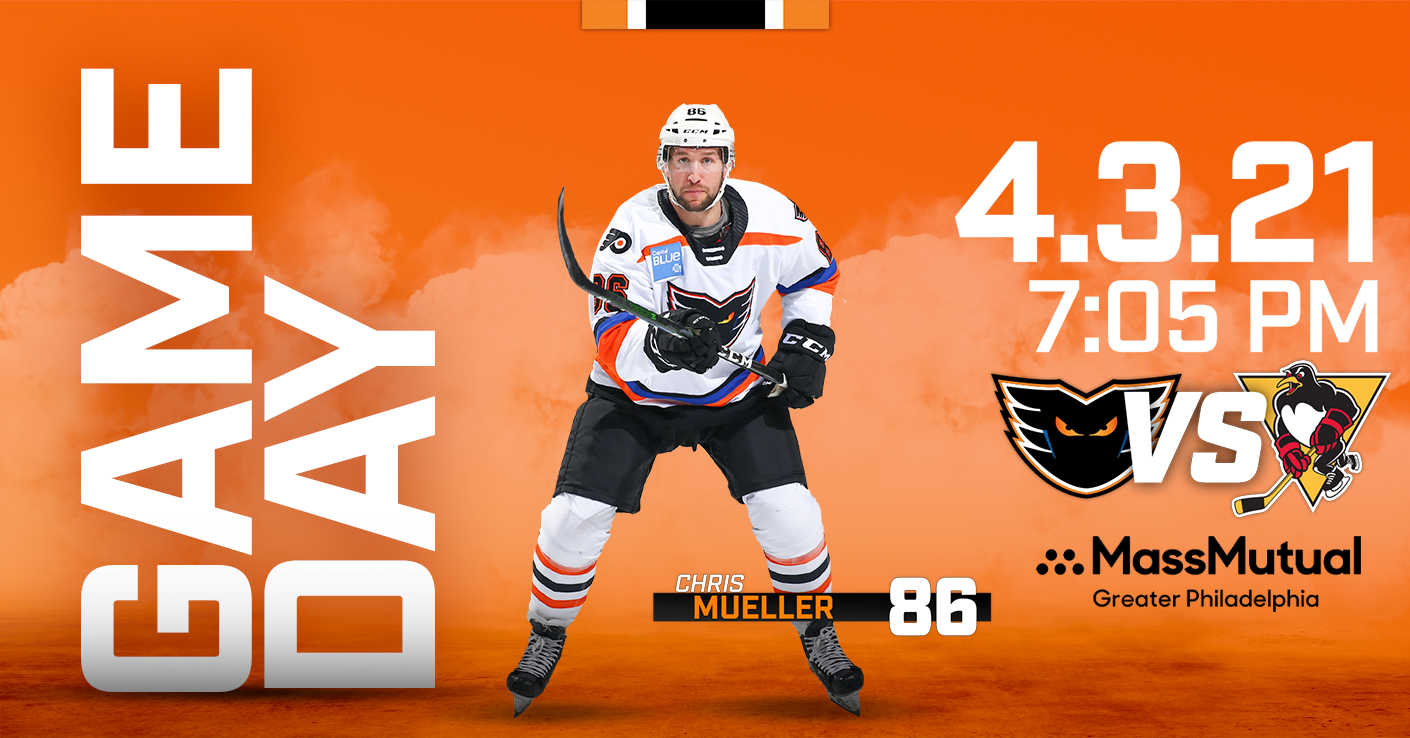 Last Time Out – Tyson “FOUR-ster” racked up a four-point night as the 19-year-old rookie winger took part in every Phantoms goal as part of a 4-1 victory over the Hershey Bears on Wednesday. Foerster scored two goals in the first period and added two assists. He passed up a shot for an empty-net instead giving to Ryan Fitzgerald (9th) who sealed the victory. Derrick Pouliot (3rd) also scored and Zane McIntyre had a 27-save effort in the win. Scott Gordon became just the sixth coach in AHL history to record 400 wins.

Four for Foerster – Tyson Foerster became the 10th Lehigh Valley Phantom to record four points in a game and just the second rookie to do so. He is the first Phantoms rookie to score four points in a game at PPL Center. Colin McDonald holds the Lehigh Valley record with five points on January 27, 2016 with 3 goals and 2 assists against the Binghamton Senators. Nick Cousins and Chris Conner both accomplished the feat three times. Phil Varone and Jordan Weal each did it twice. Jason Akeson, Danick Martel, Mike Vecchione and Pascal Laberge also had four-point games.

Transactions – Forwards Tanner Laczynski and Linus Sandin have been recalled to the Flyers taxi squad. Forwards Connor Bunnaman and Carsen Twarynski have been loaned to the Phantoms from the Taxi Squad. Laczynski had sox goals in a four-game stretch last week including a hat trick and an overtime winner. Sandin has scored two goals for the Phantoms this season. Bunnaman has played 18 games with the Flyers this year while Twarynski has appeared in four games with Philadelphia.

York on His Way – Big10 Defenseman of the Year Cam York signed an NHL Entry-Level Contract with the Philadelphia Flyers on Wednesday. The southern California native from Anaheim Hills was captain of the USA team that won the Gold Medal at the 2021 World Juniors in Edmonton. York just completed his sophomore season at the University of Michigan and was a first-round selection of the Philadelphia Flyers at the 2019 NHL Entry Draft. The slick-moving, 20-year-old blue-liner has not been loaned to the Phantoms yet but is expected to join the club to begin his professional journey.

Cal Closes In – Cal O’Reilly is knocking on the door to become only the 10th player in AHL history to record 500 assists. The AHL active’s scoring leader currently has 493 helpers including nine this season. O’Reilly’s 621 career points rates 38th all-time in AHL history. He currently stands 12th in assists and is two away from catching former Hershey Bears great Chris Bourque (495) for 11th.

The Series – The Phantoms are 2-1-1 against the Penguins this season. Three of the four games have gone to overtime. This is Game 5 out of 10 total between the Phantoms and Penguins. Last time against Wilkes-Barre/Scranton on Sunday, March 21 it was a two-goal effort by Tanner Laczynski that led the comeback. Laczynski’s first pro goal tied the game in the third period at 4-4 and then Laczynski scored the game-winner in overtime. Ryan Fitzgerald scored the winning goal in OT at Wilkes-Barre on March 8. Frederick Gaudreau scored on overtime for WBS at PPL Center on February 27.

Scouting the Penguins – Wilkes-Barre/Scranton went from a six-game point streak to a seven-game winless slide. The Penguins finally found the win-column again on Wednesday with Jordy Bellerive’s overtime winner in Newark to down the Binghamton Devils 3-2. The Penguins are 4-3-1 on the road and only 2-4-3 on their home ice.

Lehigh Valley Phantoms with Four Points in a Game (16):