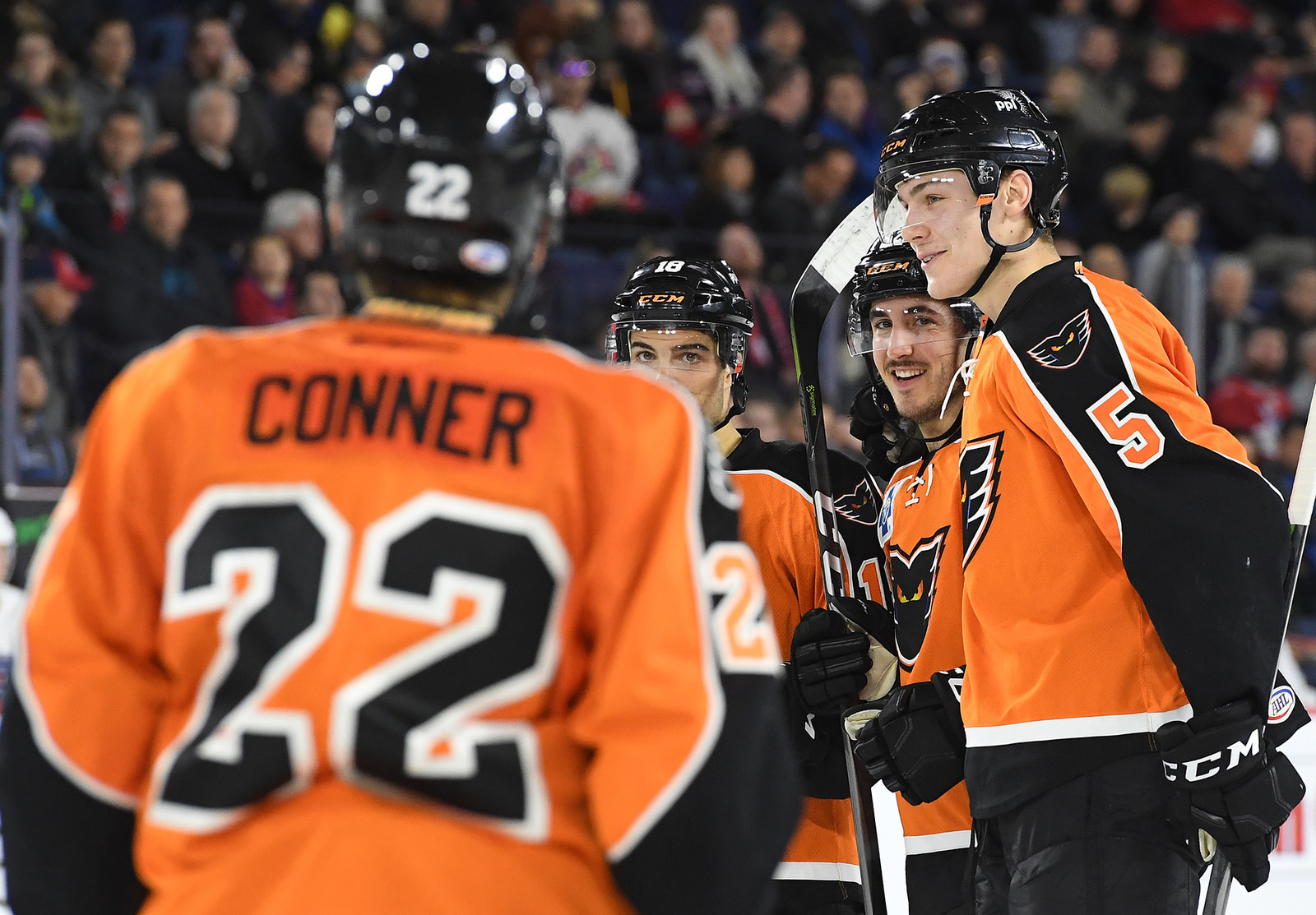 LAVAL, QC. — It was the letter “V” that would lead the Lehigh Valley Phantoms to a 5-2 victory over the Laval Rocket on Friday night in Canada.  Mike Vecchione and Phil Varone each netted a pair of goals while Mikhail Vorobyev notched another in a game that saw the Phantoms score three on the power play.

Rookie forward Vecchione tallied the go-ahead goal — his fifth of the season — with 6:50 remaining in the first period to put the Phantoms up 2-1.  He followed that up with an early power-play goal in the second period to stretch the Lehigh Valley lead to 3-1, giving the Union College product his second, two-goal game of the week and fourth multi-point contest of the season. 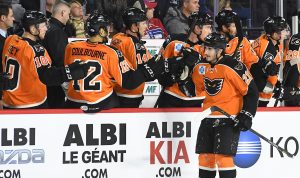 Vecchione, who was named the CCM/AHL Rookie of the Month for October, has now strung together three separate point streaks over the first 17 games of the season.  With a three point night (2G-1A) in Friday’s contest, the 24-year-old center is now tied for second on the team in points and currently leads all rookies in the AHL with 18 points (6G-12A).

Not to be outdone, the 7th-year professional Varone potted two goals — his fourth and fifth of the season — at the 5:24 and 18:57 marks of the third period, respectively, placing him in a tie with Vecchione for second overall on the team in points with 18 (5G-13A).

Another Phantoms rookie, Vorobyev, tallied his second goal of the season when he hacked a loose puck past Laval’s Zach Fucale on the first power play of the night for Lehigh Valley at the 11:23 mark of the first period.

By night’s end, the “Flying V’s” — Vecchione, Varone and Vorobyev — had netted a combined five goals and two assists for a total of seven points between the three.

Although the Rocket managed to get two past Phantoms goaltender Dusitn Tokarski, with the second coming just past the halfway point of the third period, the netminder finished the night by making 28 saves on 30 total shots to raise his record to 4-1-1. 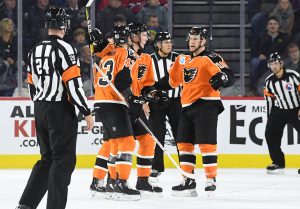 The Phantoms power play, which was 11 for 79 (13%) coming into Friday’s contest, finished three for five (60%) for the team’s fourth multi-power-play-goal game of the 2017-18 season.  Lehigh Valley also fended off five Rocket power plays to finish at a perfect 100 percent on the penalty kill.

With the victory, the Phantoms moved into second place in the AHL’s Atlantic Division with a record of 10-5-0-2 on the season, tying them for the second-most points in the league.  The team also remained perfect, now 7-0-0-0, when leading after two periods of play.

The Lehigh Valley Phantoms will play two more games on the road, Nov. 22 at Wilkes-Barre/Scranton and Nov. 24 at Springfield, before returning home to PPL Center to take on the Bridgeport Sound Tigers on Nov. 25.

Reserve your season tickets and group outings for the 2017-2018 season of Phantoms hockey.  For more information on how to reserve your seat at PPL Center to the hottest ticket in town, call the Phantoms front office today at 610-224-GOAL [4625]!