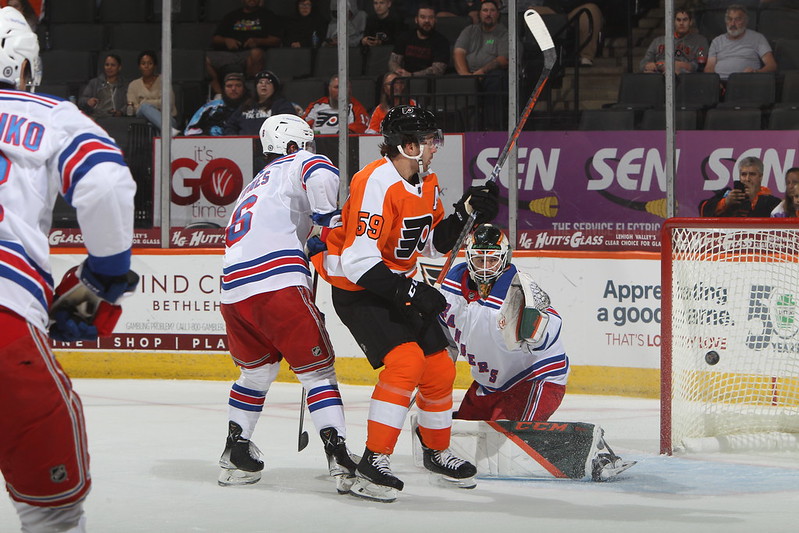 Lehigh Valley, PA – Five highly touted Philadelphia Flyers prospects scored goals but it was goaltender Sam Ersson who stole the show in his return to game-action as the Flyers defeated the New York Rangers 5-1 on Saturday night at PPL Center in the concluding game of the weekend Rookie Series.

Egor Zamula, Olle Lycksell, Noah Cates (SH), Zayde Wisdom and Ronnie Attard (PP) all lit the lamp for Philadelphia. Lycksell finished a terrific weekend with four points including goals on each night and a pair of assists on Saturday.

The Noah Cates shorthanded goal was assisted by brother Jackson Cates during a 2-on-1 shorthanded rush. Playing together for the first time since they were teammates at Minnesota-Duluth, the brotherly combo showed their obvious chemistry all weekend long on their line with Tyson Foerster.

The Flyers made the most of their opportunities as they were outshot by the New York Rangers 37-15. But Sam Ersson was up for the challenge. Entering his second season in North America, the Flyers fifth-rounder in 2018 showed how strong he can perform in the crease after an injury-plagued season in 2021-22. Ersson only played five games last year with only two coming after October in which he left both contests with reaggrevations of his injury. But following off-season groin surgery and hard work to rehab and get back to game shape, Ersson was on top of his game right from the start. 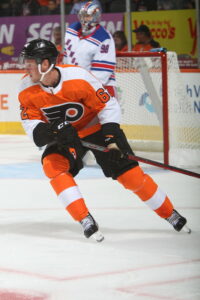 Ersson made 10 straight saves in the opening minutes of the contest while the Flyers were slower to get started. But just over 13 minutes into the game, Philadelphia’s first shot on goal would also go IN the goal. Noah Cates on the right boards connected with Tyson Foerster beneath the goalline. Foerster showed solid vision spotting Egor Zamula across the slot at the top of the left circle. The third-year defenseman ripped a shot to the upper-right corner to give the Flyers a 1-0 lead.

With 1:46 remaining it was Olle Lycksell’s turn to strike for a second consecutive night. Elliot Desnoyers won a faceoff over to Lycksell who sneaked a sharp angle shot from the bottom of the left circle past goaltender Olof Lindbom for a 2-0 lead.

Philly stretched the lead to 3-0 with 11:45 left in the second period when Jackson Cates picked off a pass on the penalty kill and raced away with his brother. His feed on the 2-on-1 was an easy slam-dunk on the backdoor for Noah.

Effective puck movement in transition led to Zayde Wisdom’s goal with 2:57 left in the second period. Desnoyers notched his second assist of the contest with a strong entry across the line despite two Rangers defenders attempting to knock it away. Desnoyers slipped a pass to Olle Lycksell streaking up the left wall who then sharply connected with Wisdom busting for the cage and the chip past relief goalie Talyn Boyko.

Philadelphia was enjoying a comfortable 4-0 lead at the second break even though they were being outshot 24-10 in the game.

The Rangers finally got on the board with Bobby Trivigno’s shot from the left circle on the rush that beat Sam Ersson on New York’s 25th shot of the game.

Ronnie Attard cranked up a power-play goal with 5:32 left on a big half-slapper from just left of center-point to the glove side of Boyko off of yet another set up by Lycksell.

Some of the players in the Rookie Series will be strong contenders for roster spots on the Philadelphia Flyers this year while others are projected to begin the season with the Lehigh Valley Phantoms. 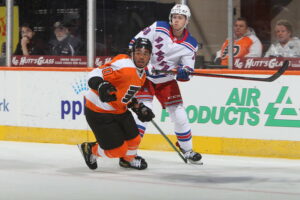 Executives and coaches from both organizations enjoyed the opportunity to provide their young prospects with an exciting game atmosphere for this year’s Rookie Series at PPL Center. Gigantic thank yous go out to the Philadelphia Flyers and New York Rangers on joining us in Allentown for this special event and bringing another edition of “Flyers in the Valley” with these NHL teams doing battle in Center City Allentown.

The Philadelphia Flyers Rookie Camp returns to Voorhees, NJ for its final session on Sunday. After that is Flyers Training Camp which begins on Wednesday with Philadelphia’s first preseason game on Saturday, September 24 against the Boston Bruins.

The Lehigh Valley Phantoms are expected to open their Training Camp in early October and will take to the ice for three preseason games beginning with an away contest on Friday, October 7 at the Wilkes-Barre/Scranton Penguins.

The Phantoms are at home for a pair of preseason games on Saturday, October 8 against the Hershey Bears and Wednesday, October 12 against the Wilkes-Barre-Scranton Penguins.

The season-open for the Phantoms is at Wilkes-Barre/Scranton on Saturday, October 15.

Opening Weekend at PPL Center is Saturday, October 22 and Sunday, October 23 with a weekend series against the Cleveland Monsters featuring T-Shirt throwing sensation Cameron Hughes and a Rally Towel Giveaway. Fan interaction activities return on October 23 with a postgame photo session with the players on the ice.

Tickets for upcoming Phantoms games are on sale at PPLCenter.com 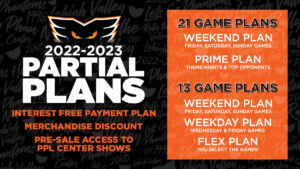