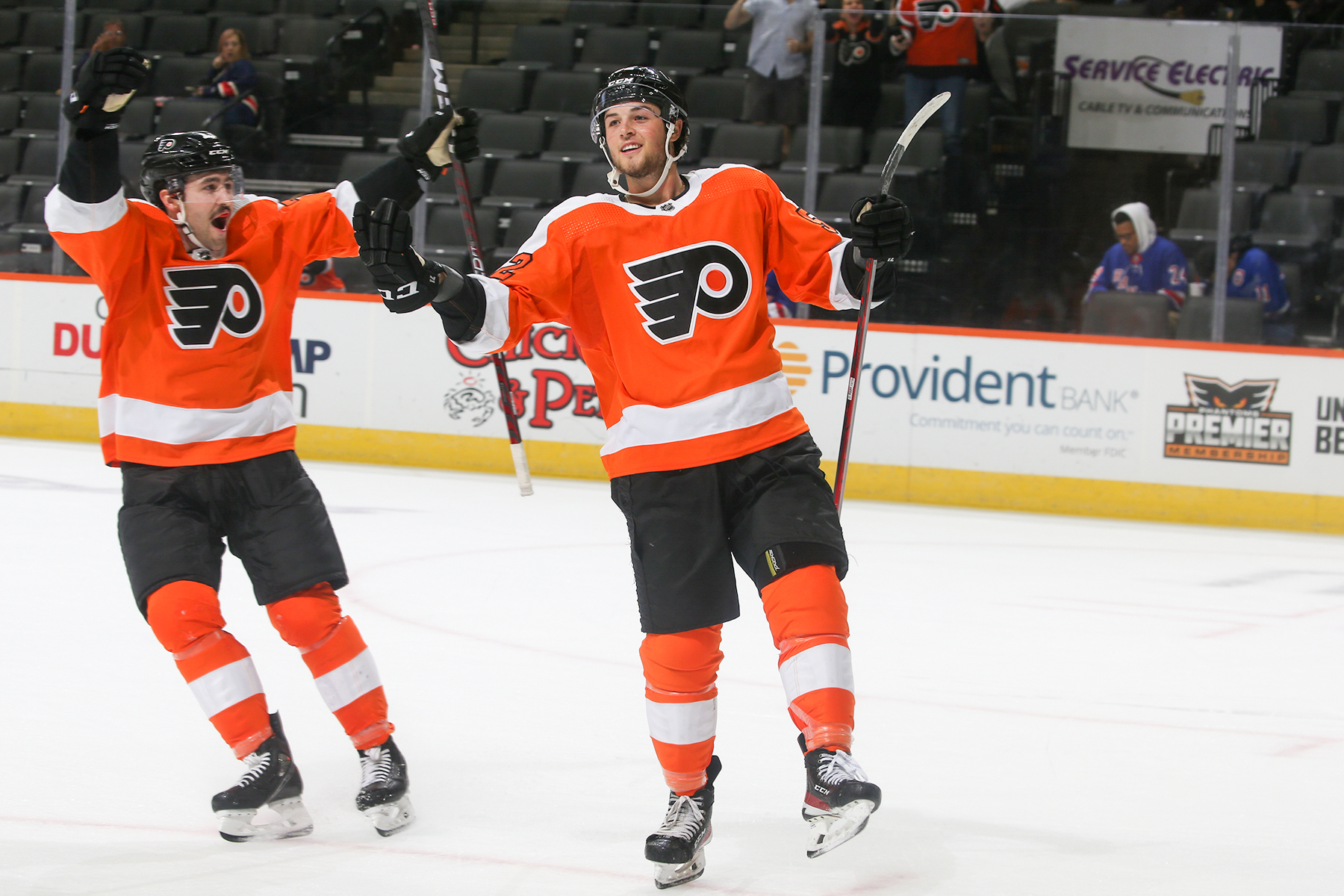 Elliot Desnoyers won a defensive-zone faceoff and tipped the puck over to Foerster who raced away up the left wing. He had defenseman Adam Ginning joining him on the 2-on-1 rush but Foerster’s role is to shoot the puck himself which is exactly what he did for the winning strike just 39 seconds into the extra frame.

The Flyers and Rangers will rematch at PPL Center on Saturday at 5:05 p.m. 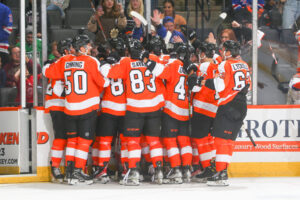 The high-energy contest packed with some of the top prospects in both organizations was an exciting and enjoyable way to open the season. While playing in a true game atmosphere at PPL Center was also enjoyable and has its own benefits. Many Rookie Games in the past have been played in training facilities and practice rinks.  Both the Flyers and Rangers had their coaching staffs and front office management watching from the pressbox and suites while the organizations’ AHL coaching staffs were in charge at the benches. Ian Laperriere ran the show for the Flyers while  Hartford head coach Kris Knoblauch ran the show for the Rangers.

Along with Foerster’s overtime winner, Olle Lycksell also scored for Philadelphia in his first game back on North American ice.  His goal in the second period had him rushing up the right wing and dangling around a Rangers defenseman. Lycksell then took it to the house and fired it in five-hole to even the score at 1-1 with 5:30 remaining in the second period via his impressive unassisted tally.

Matt Robertson had struck earlier on the power play for the Rangers at 5:33 into the second period to give New York the initial 1-0 lead. But the Flyers defense and goaltending shut down the Rangers the rest of the way. that included some inspired play from big newcomer Adam Ginning who had dropped the gloves late in the first period with Jayden Grubbe in an extended fight that pumped up the crowd as well.

Philadelphia also had an extended 5-on-3 in the first period to try to get on the board first. Mason Millman quarterbacked the man-advantage and set up the big right-handed one-timers of Foerster in the left circle but former Team Canada World Juniors teammate Dylan Garand made a pair of big stops on Foerster’s blasts to help kill off the 5-on-3. 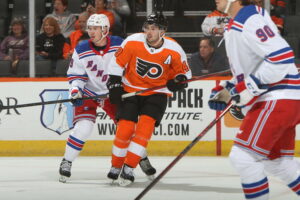 Ian Laperriere was pleased with his team’s strong energy and overall excitement during the game and complimented the effort while acknowledging the understandable mistakes that were made by a group of individuals without the experience of having played as a team before. But he might have been less happy with the opening of the second period when the Flyers had zero shots in the first 10 minutes while the Rangers pushed forward with a strong surge that also led to their lone goal of the evening.

Philadelphia found its form and improved intensity shortly thereafter as the Flyers racked up 10 shots in the final 10 minutes of the second period. The Flyers kept up the dominating play into the third period in which they outshot the Rangers 13-4 but Philly was still unable to break the tie. Alexis Gendron had a breakaway and Tyson Foerster almost set up Jackson Cates on the backdoor after a strong outlet pass by Noah Cates. But Rangers defenders, as well as goalie Talyn Boyko, made the big stops to keep the game deadlocked. The Flyers only had 11 shots on goal against starting goalie Dylan Garand in the first 30 minutes of the game but cranked up 26 shots in the next 30 minutes against relief goalie Talyn Boyko.

Meanwhile, the Flyers also rotated two different goalies for the game with a pair of tryout invite netminders getting an opportunity to impress. Nolan Maier (Saskatoon – WHL) stopped 11 of 12 shots while Jonathan Lemieux (Saint John – QMJHL) turned aside all nine shots he faced including a strong opportunity from first rounder Brennan Othmann in overtime.

Foerster skated on a line with brothers Jackson and Noah Cates to comprise a dangerous trio that showed some early-season chemistry despite their lack of practice time together. Foerster is coming off a Gold Medal triumph with Canada at the World Juniors tournament in August while Noah Cates had recently played for the USA Olympics team in Beijing, China in February before joining the Flyers and making his NHL debut a month later.

Some of the players who did not get in the lineup in the Friday game are expected to play in the Saturday night rematch including goalie Sam Ersson as well as exciting defensemen Ronnie Attard and Egor Zamula.

Tickets for the Saturday night rematch are available at PPLCenter.com