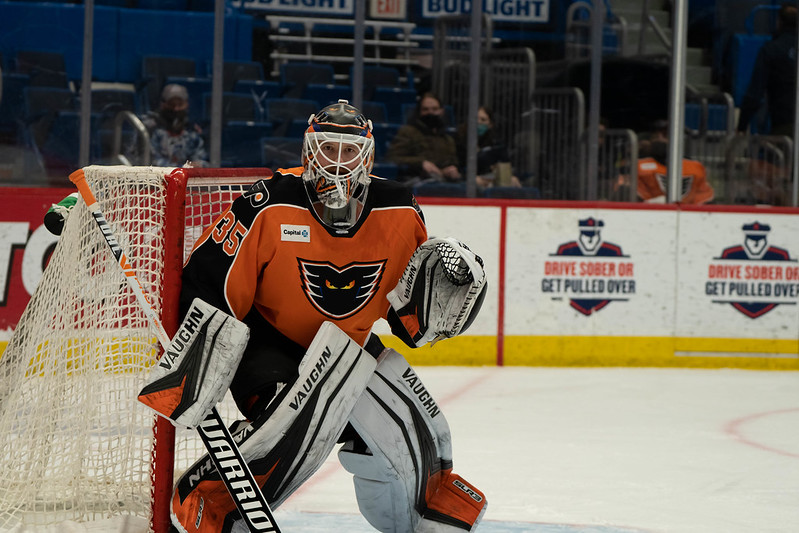 Hartford, CT – Pat Nagle made his Phantoms’ Swan Song before his Olympics departure one to remember. With 26 saves, including several impressive stops in the third period, the 34-year-old veteran goalie picked up his first career shutout in the American Hockey League as the Lehigh Valley Phantoms won at the Hartford Wolf Pack 4-0 on Saturday night.

Nagle has 17 shutouts in the ECHL but never had finished off a blank sheet in the AHL…until tonight. Nagle is leaving the Phantoms for three weeks and is departing on Sunday for Los Angeles. He will join the United States Olympic Team there and they will head for Beijing, China in a few days. Nagle is expected to return to the Phantoms in about three weeks. 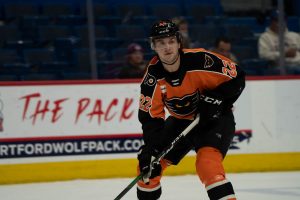 Lehigh Valley (13-14-8) raced out to a 3-0 lead in the first period as they pulled a total 180-degree turnaround from their poor start at Springfield one night earlier in which they fell behind 5-0 in the first.

In their strong rebound performance, Hayden Hodgson (9th), Wyatte Wylie (1st) and Alex Kile (2nd) all found the back of the net. Initially, it appeared Logan Day had scored the first goal for the Phantoms but the scoring decision was eventually changed to credit the goal to Hayden Hodgson on a deflection down low.

Hodgson’s deflection at 7:26 into the game got it started with Day and Cal O’Reilly receiving assists. O’Reilly moved into a tie for the team lead in scoring with Adam Clendening at 24 points apiece on is 521st career assist, 9th most all-time in the AHL.

Just 36 seconds later, it was Wylie from the top of the right circle on a one-timer directly off a left-circle faceoff win by Nick Lappin. Wylie scored his first goal since his pro debut last season on Feburary 5, 2021 when he scored the first goal of the year on Opening Night on the road at Hershey via a 6-on-5 marker that tied the game at 1-1 with just 45 seconds left before he eventually assisted on Ryan Fitzgerald’s overtime winner. That Wylie tying goal in last year’s season opener was similarly a one-timer blast off a faceoff win.

Kile blasted it home from on top of the net on a set up by Matt Strome behind the cage. Hodgson had rolled the puck down low for Strome to open the sequence and give the Phantoms a 3-0 lead less than 11 minutes into the contest.

Garrett Wilson (10th) buried the rebound of a Linus Sandin shot at 3:56 into the second that bounced off Hartford goalie Tyler Wall. Jackson Cates also assisted on the play. The 4-0 lead early in the second period was more than enough for Nagle and the Phantoms.

A point-blank denial on Ty Ronning late in the third preserved the shutout. Logan Day had a block in front of a partly open net in the second period to keep the Wolf Pack from scoring. And another shot hit off the post after potentially catching Nagle’s shoulder as well. A few close calls along the way but the Phantoms pushed through and got the shutout for a goalie who has helped spark this team’s resurgence.

The Phantoms return to PPL Center on Sunday at 5:05 p.m. to tangle with the Hershey Bears on meLVin Kids Activity Book Day.