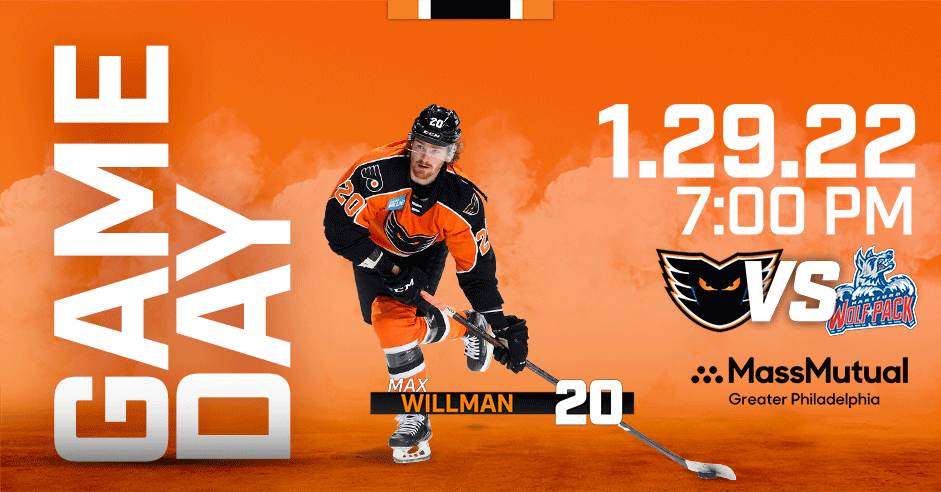 TONIGHT: The Lehigh Valley Phantoms conclude their five-game road swing at the first-place Hartford Wolf Pack on tonight’s Phantoms GAMEDAY presented by MassMutual. Lehigh Valley (12-14-8) is 2-1-0 against the affiliate of the New York Rangers including a 3-1 win in the last visit to XL Center in Hartford on December 17. Hartford (20-11-5) is tops in the Atlantic Division again and has won three straight following a 5-4 shootout victory over the Provience Bruins on Friday. The Phantoms are an even 2-2-0 on their current road-trip. Tonight is Game #35 of the 2021-22 season.

LAST TIME: Springfield raced out to a 5-0 lead in the first period on its way to a 6-2 win over the Phantoms on Friday night at MassMutual Center. Nathan Walker led the T-Birds with a natural hat trick in the first period and tacked on an assist on the final goal for a four-point night. Garrett Wilson (9th) and Nick Lappin (2nd) scored in the third period for the Phantoms while Adam Clendening had a pair of assists. Lehigh Valley out shot the Thunderbirds 25-11 in the final 40 minutes after the initial 5-0 deficit.

OLYMPICS HONOR: Pat Nagle has been chosen to play for the United States National Team at the upcoming 2022 Winter Olympics in China. The 34-year-old veteran goalie will depart the Phantoms on Sunday and will be away with the American team for three weeks. Congratulations, Pat!!

HARTFORD WOLF PACK: Kris Knoblauch’s Wolf Pack have vaulted into the top spot of the competitive Atlantic Division standings via a three-game win streak. Jeff Taylor scored in the seventh round last night as veteran goalie Keith Kinkaid improved to 14-2-2 to rate tops in the Eastern Conference in wins. Leading scorer Jonny Brozinski (13-15-28) is one of several recalls to the Rangers along with Zac Jones, Tim Gettinger and Morgan Barron. Leading the Wolf Pack among active players are  former Springfield Thunderbird Anthony Greco (9-18-27) and former Bridgeport Sound Tiger Tanner Fritz (6-17-23).

NOTEABLES:
– Linus Sandin made his NHL debut on January 25 for the Philadelphia Flyers at the New York Islanders. Sandin has scored 5 goals in his last 7 games with the Phantoms. He beccame the 34th Lehigh Valley Phantom to make his NHL debut with the Flyers on a recall and the third this season joining Max Willman and Felix Sandstrom.
– The five goals allowed in a single period on Friday at Springfield is tied for an all-time Phantoms franchise record last done on March 2, 2018 when Lehigh Valley trailed Hershey 5-1 in the first in a game in which they shockingly won 7-6.
– Wyatte Wylie’s three-assist game on Sunday was his new career-best for points in a game and is tied for the most points in a game by any Phantoms player this year.
– Lehigh Valley has gone 9-3-3 with points in 12 its last 15 games after a beginning that saw just three wins in the first 19 games at 3-11-5. But the Phantoms are 1-2-0 in their last three.
– Cal O’Reilly has 12 points (3-9-12) in his last 9 games including four multi-point games in that stretch.
– Defenseman Adam Clendening has 12 points (2-10-12) in his last ten games including four multi-point games in the last seven. Clendening has passed O’Reilly for the team-lead in scoring.

UP NEXT: The Phantoms are back at home on Sunday at 5:05 p.m. against the Hershey Bears on meLVin Kids Activity Book Night.