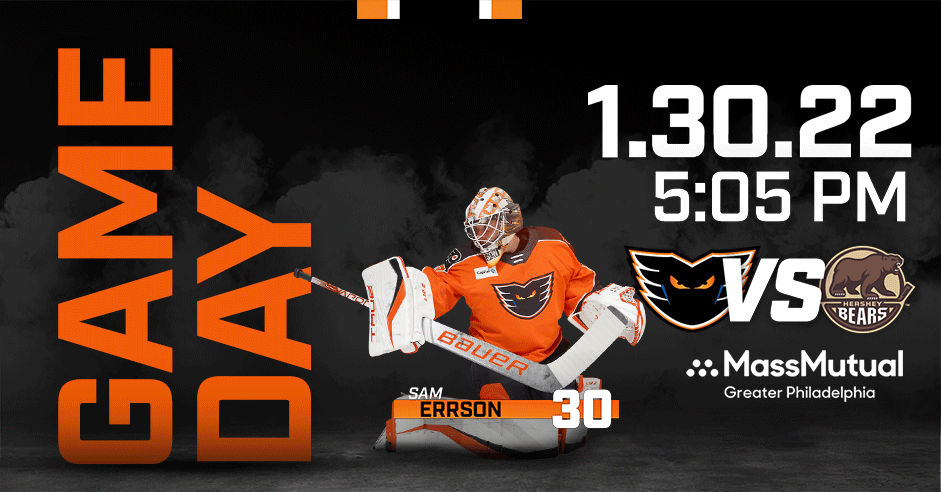 TONIGHT: It’s a GAMEDAY at PPL Center presented by MassMutual. The Lehigh Valley Phantoms return home to tangle with the rival Hershey Bears in Game 5 out of 14 in the rivalry series with a 5:05 p.m. puck drop. Lehigh Valley (13-14-8) has points in six of their last seven home games at 3-1-3 and points in 13 of the last 16 games overall at 10-3-3. Lehigh Valley has thrived in Sunday games this year with a 3-1-2 record. The Phantoms lead the season series over Hershey with a 2-1-1 mark including a 2-1 win on December 21 the last time the Bears visited PPL Center. Lehigh Valley fell at Hershey in overtime on January 5 in a 4-3 decision.

LAST TIME: Pat Nagle had 26 saves for his first career AHL shutout in a 4-0 victory at first-place Hartford on Saturday night. The 34-year-old veteran goalie was playing in his final game with the Phantoms before departing for Beijing, China for the next three weeks as a member of the U.S. Olympic Team. Lehigh Valley raced out to a 3-0 lead in the first period on goals for Hayden Hodgson (9), Wyatte Wylie (1) and Alex Kile (2). Early in the second period, the Phantoms would finish their scoring on a team-leading 10th goal of the season for Garrett Wilson. The Phantoms finished their five-ame road-trip with a 3-2-0 record.

OLYMPICS HONOR: Pat Nagle has been chosen to play for the United States National Team at the upcoming 2022 Winter Olympics in China. The 34-year-old veteran goalie departed the Phantoms after last night’s game and will be away with the American team for three weeks. Congratulations, Pat!!

HERSHEY BEARS: The Bears are 21-12-5 and have leaped ahead of Hartford for the top spot in the Atlantic Division following their 2-1 win against Bridgeport on Saturday on an overtime goal by Phantoms’ alum Mike Vecchione. Joe Snively has been leading Scott Allen’s team in scoring with 15-23-38 prior to Saturday’s action. But Snively has been recalled to the Capitals. He had an overtime winner against the Phantoms as part of a two-goal game on January 5 at Giant Center. Garrett Pilon entered the weekend tops among active Hershey scorers with 13-15-28. Aexl-Jonsson Fjallby had a hat trick last week and now has 14 goals. Mike Vecchione is tops among active players in assists and has scored 7-16-23. This is Game 5 out of 14 in the rivalry series. The Phantoms are 2-1-1 against Hershey this season.

NOTEABLES:
– Linus Sandin made his NHL debut on January 25 for the Philadelphia Flyers at the New York Islanders. Sandin has scored 5 goals in his last 8 games with the Phantoms. He beccame the 34th Lehigh Valley Phantom to make his NHL debut with the Flyers on a recall and the third this season joining Max Willman and Felix Sandstrom.
– Garrett Wilson has goals in back-to-back games this weekend and now leads the team with 10.
– Wyatte Wylie’s three-assist game last Sunday at Charlotte was his new career-best for points in a game and is tied for the most points in a game by any Phantoms player this year.
– Lehigh Valley has gone 10-3-3 with points in 123its last 16 games after a beginning that saw just three wins in the first 19 games at 3-11-5.
– Cal O’Reilly has 12 points (3-9-12) in his last 9 games including four multi-point games in that stretch.
– Defenseman Adam Clendening has 12 points (2-10-12) in his last ten games including four multi-point games in the last seven. Clendening has passed O’Reilly for the team-lead in scoring.

UP NEXT: The Phantoms have a morning game on Wednesday, February 2 at the Bridgeport Islanders and then return to PPL Center on Friday, February 4 againt the Providence Bruins on Season Ticket Holder Appreciation Day.