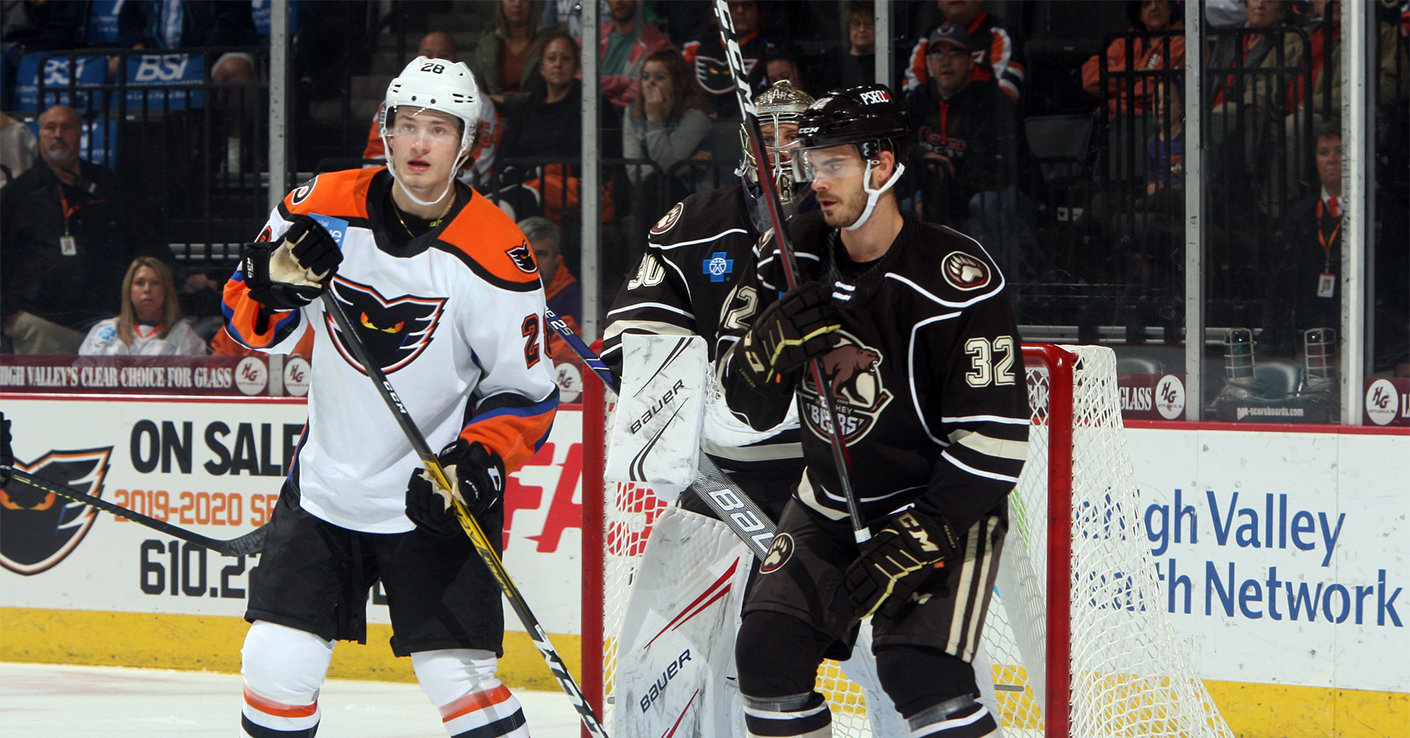 Lehigh Valley, Pa. – When the Lehigh Valley Phantoms (1-1-1-0) and Hershey Bears (1-1-1-0) get together, fans are always in for high-intensity hockey and Saturday night’s matchup between the two interstate rivals was nothing short of that. Joel Farabee scored for the second straight game, and Isaac Ratcliffe and Maxim Sushko scored their first goal of the season. For Sushko, it was his first professional goal.

The first period saw the two teams exchange a total of 21 shots and four goals. The Phantoms opened the scoring early in the game when first-year Phantom Maxsim Sushko scored his first professional goal off a deflection as he was stationed in front of Hershey goalie Vitek Vanecek. Defenseman Philippe Myers received the primary assist on the play as he ripped a slap shot towards Vanecek that found Sushko before finding the back of the net. Sushko is in his first season of his professional hockey after finishing up his juniors career with the Owen Sound Attack of the OHL. With the Sound Attack, Sushko had a total of 143 points with 67 points and 76 assists in 178 games played.

The Bears answered back just minutes later when forward Beck Malenstyn scored a shorthanded to tie the game at 1-1 at the 5:35 mark of the period.

The Phantoms reclaimed the lead in the final minutes of the first period when Joel Farabee scored his second goal of the season. Kyle Criscuolo fed a pass perfectly to Farabee in front of Vanecek who sent it to the top shelf to give the Phantoms a 2-1 lead. The goal was Farabee’s second in as many games with the Phantoms after scoring a spectacular goal on Friday night against the Wilkes-Barre/Scranton Penguins.

The Bears would not go quietly, however, as they once again found an answer, this time beating J-F Berube on a redirection by forward Mike Sgarbossa at the side of the net. After the first 20 minutes of play, the Phantoms and Bears went into intermission tied at 2-2. 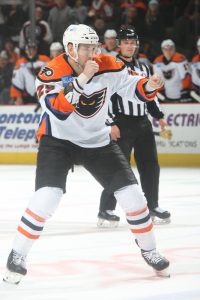 The second period was a quiet from a scoring standpoint but busy one for the goaltenders as both teams took nine shots each. The period also saw the Hershey and Lehigh Valley rivalry renewed in the first meeting and the Phantoms first fight of the season as Kurtis Gabriel and Bears forward Liam O’Brien dropped the gloves at center ice and squared off.

In the third period, action picked up as Issaac Ratcliffe put the Phantoms back up 3-2 after tapping in a loose puck in the crease. Ratcliffe is in his first full season with the Phantoms after playing two games at the tail end of last season. He scored his first career goal in his professional debut two seasons ago on April 13, 2018 against the Bridgeport Sound Tigers.

The game was tied once again at the 11:57 mark of the third period when Travis Boyd was able to get one past Berube at the side of the net to tie the game at 3-3. The two teams traded strong scoring changes in the last few minutes of the period but were unable to find another goal, sending the game to overtime. It marked the first game to go overtime at PPL Center this season.

In overtime, the Phantoms had several strong scoring chances, including two great rushed by Myers and Farabee but the Bears would score in the final second of overtime when forward Travis Boyd sent a slapshot past Berube for his second of the game, to take the game by a final score of 4-3.

Next Time Out: The Phantoms will remain at PPL Center when they take on the Binghamton Devils next Friday at the PPL Center at 7:05. Get tickets to the game HERE.