Lehigh Valley, PA – The Lehigh Valley Phantoms, proud AHL affiliate of the Philadelphia Flyers, in conjunction with the American Hockey League (AHL) are proud to announce that forward Nick Cousins and goaltender Anthony Stolarz have been named to the 2016 Toyota AHL All-Star Classic. The two-day event, which features the AHL All-Star Skills Competition on Sunday, January 31 followed by the AHL All-Star Game on Monday, February 1, will take place at the Onondaga County War Memorial Arena in Syracuse, N.Y. 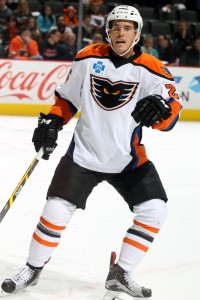 A 22-year-old center from Belleville, Ontario, Cousins is currently first among all Phantoms and tied for ninth among all AHL skaters in total scoring with 29 points. In the midst of his third professional season, the 5’11”, 188-pound pivot is also tied for fourth among all AHLers with 21 assists and enters the weekend having already produced eight multi-point games.

A third-round selection (68th overall) by Philadelphia in the 2011 NHL Entry Draft, Cousins paced all Lehigh Valley skaters in scoring a year ago with 56 points (22 goals, 34 assists) and has compiled 41 goals, 74 assists and 115 points across 174 career games with the Phantoms.

A 21-year-old goaltender from Edison, New Jersey, Stolarz has produced a 12-7-3 overall record in 23 appearances this year to go along with league’s seventh-best goals-against average (2.18) coupled with the AHL’s seventh-highest save percentage (.925). He enters the weekend having already registered eight games of at least 30 saves and recorded a season-high 42 denials as part of a 2-1 decision at the Hershey Bears on December 5. 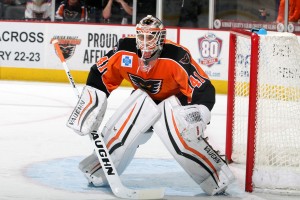 A second-round selection (45th overall) by the Flyers in the 2012 NHL Entry Draft, Stolarz is in his second professional campaign after posting a 9-13-4 mark, including two shutouts, last season.

It is the first All-Star nod for both Cousins and Stolarz.

Instead of a traditional 60-minute game, the 2016 Toyota AHL All-Star Classic will feature a new format where the league’s all-stars will be divided into four teams, one representing each of the league’s divisions (Atlantic, North, Central, Pacific). The teams will then play a round-robin tournament featuring six games of nine minutes each; the first half of each game will be played at 4-on-4, and the second half at 3-on-3. The two teams with the best records at the end of the round-robin tournament will face off for the championship, a six-minute game played at 3-on-3.

Cousins and Stolarz will be members of the Atlantic Division team.

After an incredibly successful five-game road trip in which they claimed eight of a possible 10 standings points, the Phantoms return to PPL Center for a pair of games this weekend. First, on Friday, January 8, it’s a rivalry showdown in downtown Allentown as the Wilkes-Barre/Scranton Penguins come to town for a 7:05 p.m. clash. Then, after a 5:00 p.m. road contest at the Albany Devils on Saturday, Lehigh Valley returns home on Sunday, January 10 to battle the Binghamton Senators in a 5:05 p.m. collision. Sunday’s game is Star Wars Night as the Phantoms and their fans celebrate one of the most beloved movie franchises of all time. Fans are encouraged to come to the game dressed as their favorite Star Wars characters and will have the opportunity to meet and take pictures with some of the most iconic heroes and villains in film history with a special appearance from the 501st Garrison.

A limited number of tickets for both Friday and Sunday’s games are available now at pplcenter.com, by calling 610-347-TIXX [8499] or in-person at the Mealey’s Furniture Box Office at PPL Center [701 Hamilton Street].