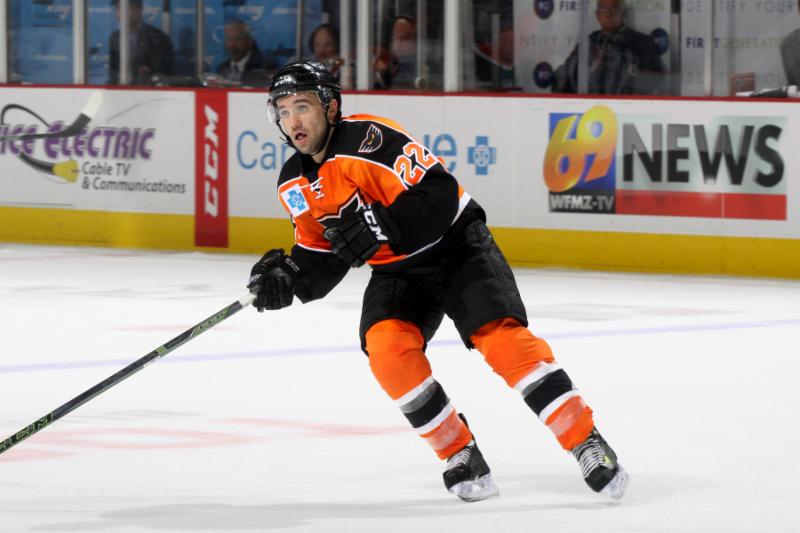 Martel, Straka and Goulbourne Strike as well in Road Triumph

Springfield, MA – Veteran speedster Chris Conner led the way with a three-point effort including one goal and two assists as the Lehigh Valley Phantoms notched their first victory of the season in a comfortable 4-1 contest at the Springfield Falcons on Friday evening.

Petr Straka, Danick Martel and Tyrell Goulbourne also scored for Lehigh Valley against the AHL affiliates of the Arizona Coyotes. Goulbourne’s goal was the first of his professional career while Straka’s was his first of the season and Martel’s was his second in as many games to commence the 2015-16 campaign.

Anthony Stolarz turned aside 19 of 20 shots he faced to record the win in his season debut in which the only puck to sneak past him was a shot from former teammate Steven Delisle that deflected off a Phantoms stick before bouncing through.

The win was the first in the American Hockey League for head coach Scott Gordon since April 12, 2008 when he served as bench boss for the Providence Bruins who had defeated Manchester on that night 3-0.

Chris Conner started the scoring just over six minutes into the game after a rapid and effective cycle in the Springfield zone. Nick Cousins rotating back to the blue-line received a little tap from Chris Conner and then connected with defenseman Mark Alt who had rotated from right defense over to the left and the all the way up to the left circle when he saw the opportunity. Alt’s close-range drive from the base of the ring bounced off Springfield goalie Louis Domingue for the rebound strike from Conner who tallied his second goal of the season.

The Phantoms extended their lead in the opening minutes of the second period. After a long 5-on-3 yielded no results, the Phantoms still had a few ticks of 5-on-4. Petr Straka quickly maneuvered the puck from the end-boards out to the left of the cage where he connected with Martel on the backdoor for the easy tap-in. The goal came at the same instant that Delisle was freed from the Springfield penalty box and thus did not count as a power-play goal. Chris Conner received credit for the secondary assist.

Delisle’s little wrister from the right boards later in the second period appeared to possibly deflect of the stick of Phantoms defenseman Samuel Morin just enough to bounce over the stick of Stolarz and hop through five-hole Delisle played in 112 games for the Phantoms over the last two seasons scoring only three times. Naturally, he was teammates with Stolarz last year as well as many other Phantoms.

Early in the third period the Phantoms would again convert moments after the conclusion of a man advantage. This time it was Petr Straka lifting one top shelf off the underside of the crossbar from close range on a down-low scramble initially set up by Andrew MacDonald’s connection with Conner.

Tyrell Goulbourne struck in grandiose fashion for his first professional tally. The rookie from the Kelowna Rockets (WHL) batted down a breakout pass at center-ice and then shoved a Springfield forward off the puck to create his own mini-breakaway. Goulbourne cranked up his blast from the right-circle beating Domingue to the far-post side which is his glove on the right hand. In just his second game as pro Goulbourne had successfully salted this one away.

The Phantoms technically went 0-for-10 on the power play but two of their goals came as a direct result of man advantages and were scored while a player was just emerging from the penalty box at that instant. Lehigh Valley held Springfield to 0-for-3 on the power play and improved to a perfect 4-for-4 on their penalty kill this season.

The Phantoms out shot the Falcons 33-20 including by a whopping 14-3 margin in the third period.

The game was the first of four between the Atlantic Division foes this year. Springfield makes their first arrival to PPL Center on December 12th in what will be the 50th meeting all-time between the Phantoms and the Falcons. The Phantoms franchise improved to 28-16-5 all-time against Springfield.

The Phantoms’ three-game road-trip continues on Saturday at 4:05 against the Wilkes-Barre/Scranton Penguins at Mohegan Sun Arena. Broadcast coverage begins at 3:20 on the official home of the Phantoms all season long, Fox Sports 1470-AM and Fox1470.com as well as the iHeartRadio app.