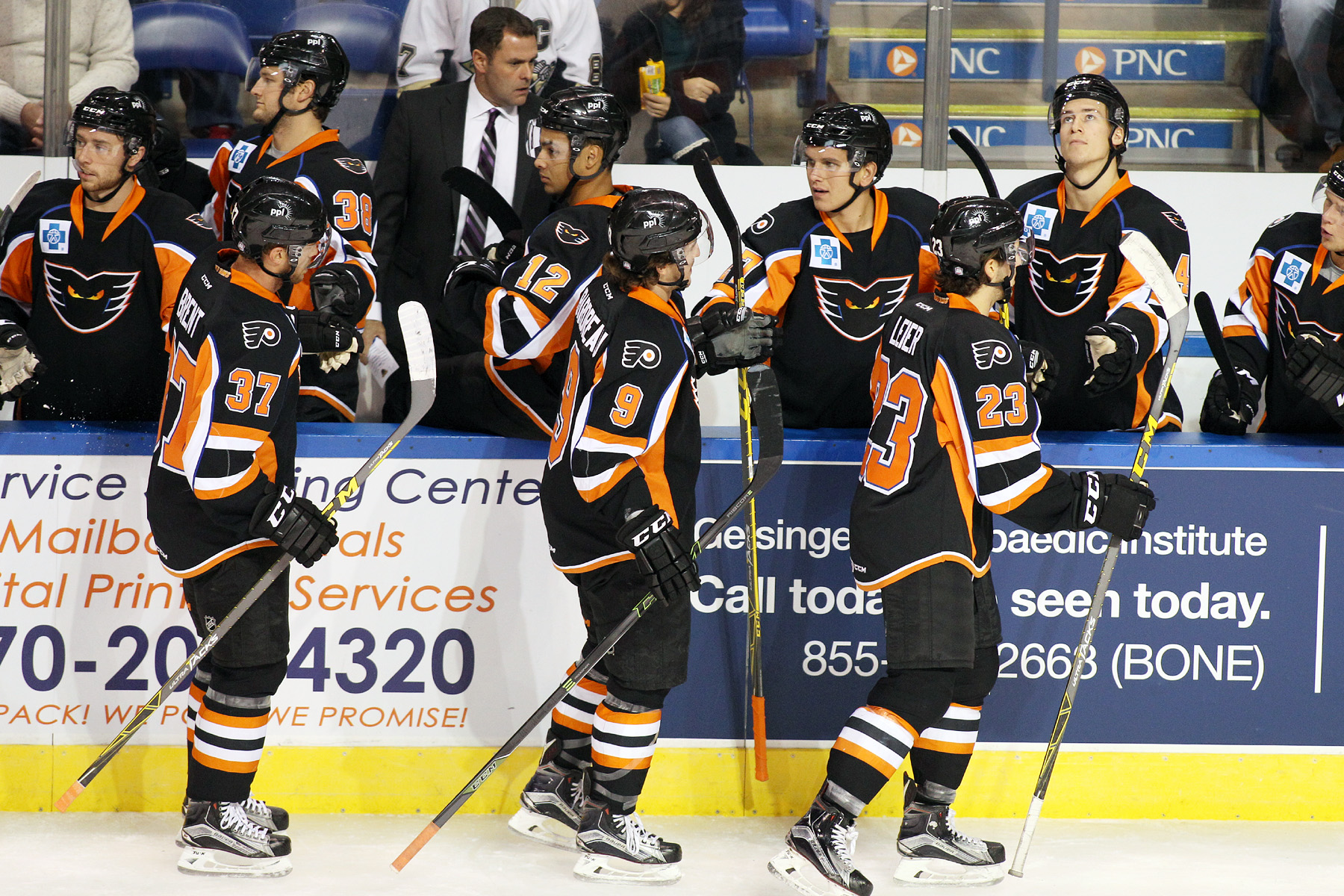 Wilkes-Barre, PA – With an already short bench due to multiple injuries the night before at Springfield, the visiting Lehigh Valley Phantoms lost two more valuable players to ailments on the road at rival Wilkes-Barre. The undermanned Phantoms squad were unable to hold an early lead as the host Penguins rallied from behind for a 6-4 victory in the home opener for Wilkes-Barre/Scranton.

The game was the first of twelve encounters in the rivalry series this year and set an impressive early tone for what is sure to be an exciting regular-season stretch of games between the Pennsylvania Turnpike foes. 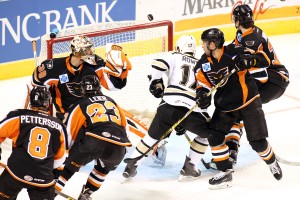 Perhaps with the Penguins still reveling in the ceremonies of their Opening Night introductions, the Phantoms were keen to take early advantage and silence the large crowd via three quick lamplighters in the opening 5:06 with Petr Straka, Jay Rosehill and Tim Brent all lighting the lamp.

But after that, the Penguins would start to gain momentum of their own taking advantage of some untimely Lehigh Valley penalties. Wilkes-Barre/Scranton rallied for a 5-3 lead on the strength of four power-play goals. Will O’Neill and Tom Kostopolous provided the bulk of the Penguins offense with a pair of goals apiece.

It was a stunningly strong beginning for the Phantoms for the 3-0 advantage and equally shocking was the Wilkes-Barre/Scranton comeback amidst the Lehigh Valley penalty parade.

“It started off with all the penalties,” head coach Scott Gordon said. “I think the good work that we did in the first ten minutes was wasted because of the penalties that we took. We had a short bench and had two guys go down with injuries tonight. We dug a hole but I really loved the way the guys came out and played the third period today. That was the biggest takeaway from this game.”

Lehigh Valley’s Jay Rosehill scored on an unassisted beauty on a steal in the Penguins zone which at the time pushed his team out in front 2-0. But the injuries coupled with the various infractions provided far more elbow-room on the bench than the veteran was typically accustomed to.

“We lost a lot of bodies,” Rosehill said. “I think that’s the shortest bench I’ve played with in a while but I think in the second period the penalty trouble is what did it.” 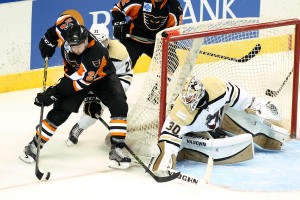 The team was already missing Danick Martel and Andrew MacDonald both of whom did not dress for the game die to different ailments received during the previous evening’s costly victory at Springfield. In the second period on Saturday against the Penguins, a couple more Phantoms rookies would exit as well with Cole Bardreau departing after a blocked shot off his hand or arm and then Michael Parks sustaining an apparent upper-body injury on a hard back-check crunching the young talent into the glass delivered by Wilkes-Barre’s Reid McNeill. Scott Gordon also reported that Robert Hagg had been injured the previous night and did not skate a shift despite dressing for the game.

The Phantoms ended up finishing the contest at Wilkes-Barre with only nine forwards. But even down by a pair, the worn-down and short-rostered Phantoms contingent wasn’t going down quietly.

Nick Cousins’s first of the season in the opening moments of the third period pulled the depleted Phantoms to within a goal at 5-4. And Lehigh Valley was just a bounce or chip away from evening the score again on an extended push in the Wilkes-Barre end with multiple cracks at goalie Matt Murray just missing the target. Veteran Captain eventually took advantage of a worn-out group of Phantoms skaters to pot an Oskar Sundqvist give from the right-wing corner for the back-breaking tally to provide for the 6-4 final margin.

The quick start for the Phantoms against Matt Murray was reminscent of their incredible performance on December 17 of last year in which they raced out to a 3-0 lead in the opening 36 seconds against Binghatmon goalie Andrew Hammond.

While taking a tad longer to build their initial three-goal cushion, the opening was almost just as enjoyable for the large group of Phantoms and Flyers fans on hand to witness the fun.

Petr Straka buried the rebound of a Chris Conner breakaway try just 1:10 into the game for his second goal of the weekend. Conner’s assist came again his former team for whom he skated in multiple seasons. 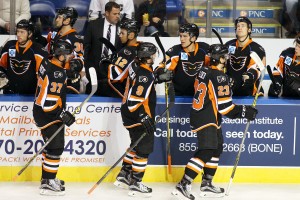 Next up was Jay Rosehill who stole the puck away on the left-wing during an errant Penguins’ breakout attempt. Rosehill buried his unassisted drive for his first of the year at 3:31. Then it was Tim Brent with the open lane from the right corner with a nice backhand shovel around Murray for the 3-0 lead with assists credited to Nick Cousins and Cole Bardreau.

But an O’Neill power-play goal before the midway part of the first period put the Penguins on the board. Then Wilkes-Barre exploded for a four-goal barrage in the second to turn the tables on their rivals.

The Phantoms and Penguins have faced each other three total times already including their two preseason encounters and in all three games fans have witnessed 3-0 leads evaporate in the form of exciting and dramatic comebacks. To re-write and old and largely inaccurate hockey cliche, apparently a three-goal advantage is the most dangerous lead in hockey when the game happens to involve the Phantoms against the Penguins.

The Penguins out shot the Phantoms 31-26. Wilkes-Barre went 4-for-7 on the power play while Lehigh Valley finished 1-for-3.

The Phantoms’ three-game road-trip concludes next Friday night at the Providence Bruins in what is also an opener of the team’s first “three-in-three” weekend of the season featuring three games in three consecutive days. Broadcast coverage begins at 6:20 from the Dunkin’ Donuts Center in Rhode Island on the official home of the Phantoms all season long, Fox Sports 1470-AM and Fox1470.com as well as the iHeartRadio app. 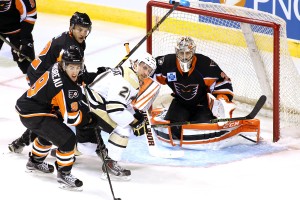