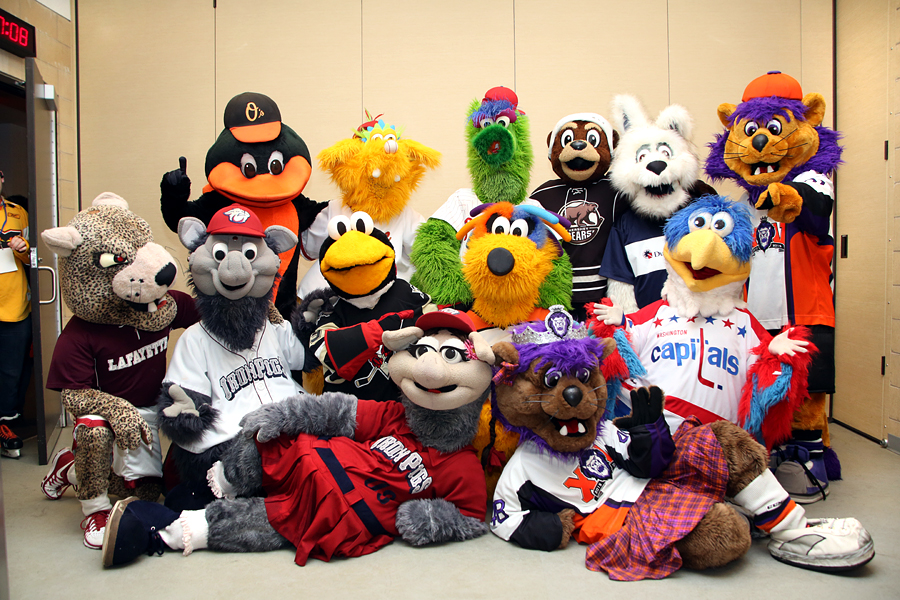 Lehigh Valley, PA – The Utica Comets broke a late tie overcoming Lehigh Valley’s third-period push in a 2-1 decision at PPL Center on Saturday night. Jordan Subban’s laser from the right point for the winner with 4:12 left countered Phil DeSimone’s earlier tying strike for the Phantoms in the final period. Anthony Stolarz produced perhaps his best game of the second half of the season with a tremendous 40-save effort in giving the Phantoms an opportunity to pull off another late and dramatic comeback which has been their hallmark of late. Indeed, the Phantoms did recover from a third-period deficit for an incredible fourth consecutive game but this time the opposition had enough gas left in the tank to counter.

The result marked the first time in five games in which Lehigh Valley was unable to secure a standings point as the Phantoms point streak concluded at four. 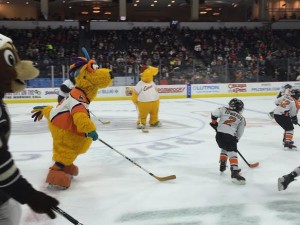 Another big crowd of 8,727 packed into the dazzling new facility at the corner of seventh and Hamilton for the team’s 17th sellout of the season and sixth in a row. The large gathering also enjoyed the antics of over a dozen mascots who converged on PPL Center to celebrate meLVin’s birthday. Mascots from the Philadelphia Phillies, Lehigh Valley Iron Pigs, Hershey Bears and Wilkes-Barre/Scranton Penguins were included in the hilarity.

Indeed, it was Mascot Mania at PPL Center thus enhancing the already-through-the-roof level of family entertainment value at Lehigh Valley Phantoms home games. All of meLVin’s birthday well-wishers filed out of a jam-packed limo at center-ice to be introduced before the game. They later took on a team of squirt players (8 and 9 years old) in a crazed intermission match-up and also whooped it up in a game of musical chairs.

The Utica Comets had the early advantage on the Phantoms but Stolarz was there to rise to the challenge and hold the high-flying opposition at bay with a number of fine stops. The Phantoms actually came the closest to scoring in the opening 20 minutes when Colin McDonald’s drive from the slot in quick transition was blasted off the right iron and bounded away. 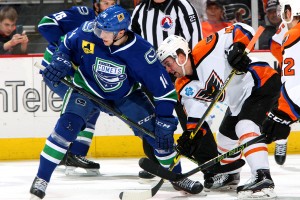 Utica took the lead early in the second period when Alexandre Grenier banged home his ninth of the season to cap a 3-on-1 rush. Later in the frame, Comets rookie Joe Labate almost added to the advantage but his drive on the tail-end of a 4-on-1 found the pipe behind Stolarz.

The Phantoms started to put the handcuffs on the Comets attack in the closing minutes of the second period and then it was Lehigh Valley who took control in the third while limiting Utica’s chances. Having overcome third-period deficits in each of the last three games, the Phantoms began their late-game comeback magic again when Chris Conner from the right corner connected with Phil DeSimone in the slot for a one-timer that evened the score at 1-1 with just 12:33 remaining in the third period. The goal was also assisted by Robert Hagg.

Conner’s helper provided him with his second consecutive eight-game point streak. The 32-year-old veteran winger has scored 2-9-11 on his latest streak and he also has points in 16 of his last 17 games producing at a torrid clip of 7-17-24 in that lengthy strength. 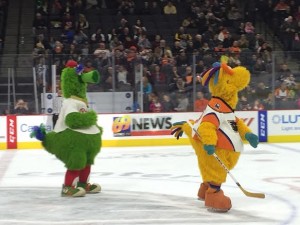 For DeSimone, the goal was his fourth of the season since joining the Phantoms about a month ago. It was also his third goal in the team’s last four games.

The Phantoms were on the hunt later in the third period when they were afforded their first power play of the evening but the team that had been clicking at better than 25% in their last 14 games (19-for-75) were not able to find the net this time. And Utica was able to build on the momentum of their key penalty kill and strike for the game-winner shortly thereafter on Subban’s bomb from the point that went for his ninth of the season.

Lehigh Valley narrowly missed a dramatic late equalizer. But Chris Conner’s wrap-around attempt to stuff in the puck from the left of the cage with 35 seconds left was repelled by winning netminder Joe Cannata. And Conner’s feed from the right corner with nine seconds to go that was deflected on the short-side by Bardreau just missed the far post by an inch and streaked over to the corner.

The Phantoms were out shot by the Comets in the game 42-22. Lehigh Valley was 0-for-2 on the power play while Utica finished at 0-for-3. The Phantoms finished a stretch of seven out of eight games at home and now will even things out with seven of their next eight contests coming on the road. 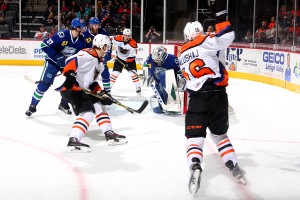 The Phantoms travel to Hartford on Sunday evening at 5:00 p.m. to tangle with the Wolf Pack. Broadcast coverage begins at 4:20 on 1470-AM and FOX1470.com and the iHeartRadio app. the Phantoms also travel to Syracuse on Wednesday evening to take on the Crunch. 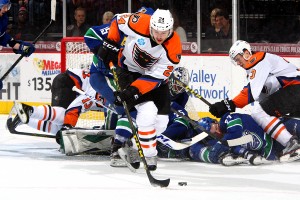