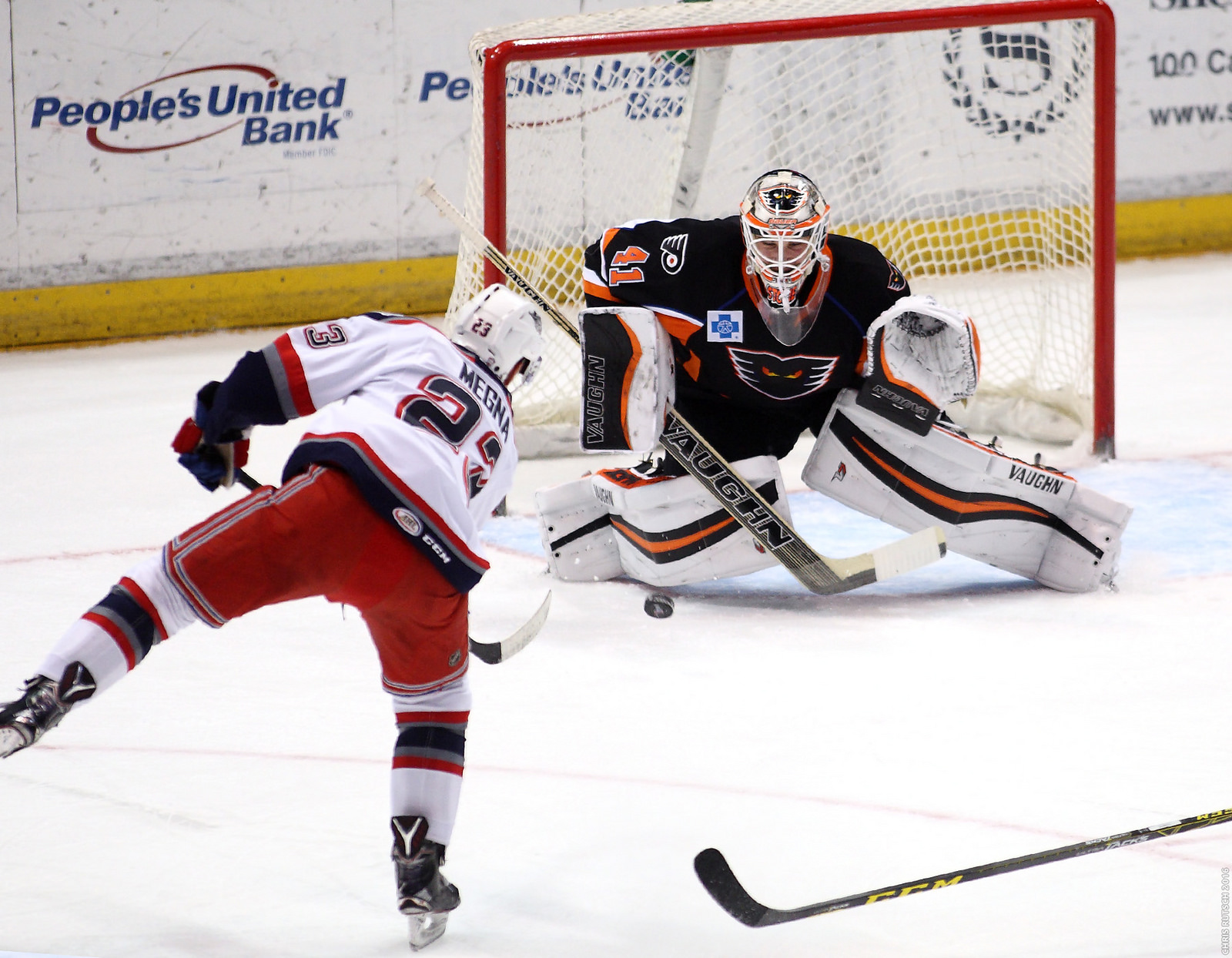 Lehigh Valley, PA – One might almost get the idea that third-period comebacks are easy. The Lehigh Valley Phantoms overcame a deficit in the final frame for a fifth consecutive game as Taylor Leier and Kevin Goumas rallied the Phantoms to a 2-1 road triumph at Hartford on Sunday evening.

The Phantoms have found themselves trailing at some point in the third period in each of the past five contests and every single time have been able to respond with an equalizer while securing standings points in four out of those five games in the rather unusual and impressive run. 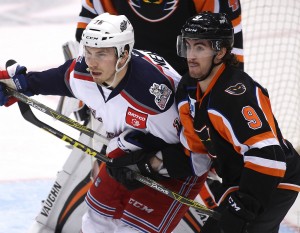 More importantly, the Phantoms road victory moves the team back to the .500 mark overall at 26-26-5 with 19 games remaining in the regular season and also pulls them to within six points of Bridgeport for a playoff spot in the Eastern Conference still with two critical showdowns against the Sound Tigers remaining on the schedule.

Lehigh Valley has now compiled standings points in 11 of their last 15 games since January 17 with an impressive mark of 9-5-2 in their lengthy run. The Phantoms also boast a road record of 6-3-1 since the turn of the calendar to the New Year.

Chris Conner’s assist to spark the third-period rally extended the 32-year-old veteran’s latest point streak to nine games. Conner was just coming off an eight-game point streak before accomplishing the feat again…plus one. With points in 17 of his last 18 games, Conner has now racked up
an impressive 25 points on seven goals and 18 assists over the past month-and-a-half.

Trailing 1-0 after two periods, but perhaps deserving of better fortunes at that point in the game, the Phantoms once again saved their best for last. Leier’s 18th strike of the season a couple minutes into the third period capped a flashy rush into the zone by Conner who wheeled around for a full 360 pirouette in the right circle setting up his backhander into the slot which was eventually deposited by Leier after an initial drive by Phil DeSimone was blocked down. Leier is second on the team in lamplighters trailing only Danick Martel who paces the club with 19. 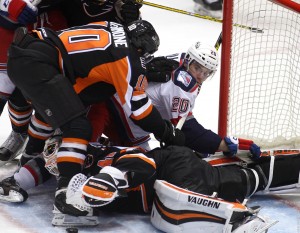 More Phantoms hustle would lead to the winning goal with about 11 minutes remaining. A long stretch-pass by Jay Rosehill from way back on the Phantoms end missed Palushaj for an attempted breakaway but he was still able to out-race the Wolf Pack for the icing and force the issue on Hartford goalie Magnus Hellburg who knew he needed to act quickly. Palushaj was able to take the puck off the stick of the Hartford netminder behind the net and then wheel around to the other side to connect with the hard-charging Kevin Goumas trailing on the play. With Hellburg still scrambling to maneuver back in front of the net, Goumas was looking at a wide open 4-by-6 for the game winning strike.

The affiliates of the New York Rangers had the better of the play in the first period but Anthony Stolarz held down the fort in his seventh consecutive start with his best stops of the night.

Lehigh Valley turned the tables in the closing minutes of the first and into the second period keeping Hellburg on his toes and generating the better of the chances. But in the closing moments of the second period, Hartford was finally able to break the scoreless deadlock just as a Wolf Pack power play had concluded. Hartford converted on a 3-on-2 rush with former Wilkes-Barre/Scranton teammates Brian Gibbons and Jayson Megna connecting for their new team’s lone lamplighter of the night. Gibbons up the left wing appeared to be attempting to drop for Chad Nehring behind him but the puck trailed all the way across to Megna who buried his back-door one-timer with just 43 seconds remaining in the middle frame.

Lehigh Valley was huffing and puffing to the finish line in the closing seconds. Stolarz made the last of his several fine saves with about a minute left and the Phantoms hard-working defenders took care of the rest and cut off every attempt the Pack had in the closing moments. Petr Straka narrowly missed sealing the win with an empty-netter with 40 seconds left when his drive from the left wing was barely deflected just inches wide by Raphael Diaz. A couple minutes earlier, Danick Martel was sprung free on a clean breakaway but his bid for a 20th goal of the season was denied on the left arm of Hellburg. 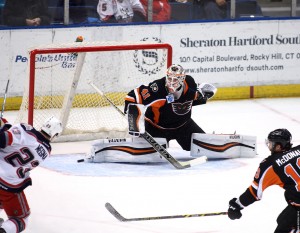 The Phantoms were without a pair of defensemen in the contest as Mark Alt and Max Lamarche were both felled by illness this week. But adjusting to new roles from one day to the next is nothing new for the team. The healthy blue-liners who were available for the game performed commendably in limiting the Hartford chances and making sure Stolarz wasn’t too overly busy in this one.

The Phantoms returns to action on Wednesday at the Syracuse Crunch for a 7:00 p.m. showdown against the affiliates of the Tampa Bay Lightning. Be sure to catch all the action on FOX 1470-AM, online at www.fox1470.com or via the iHeartRadio app beginning with “Countdown to Faceoff” at 4:20 p.m.

The Phantoms are back at home on Friday night against the rival Wilkes-Barre/Scranton Penguins on another great 20 Years of Phantoms Night at PPL Center featuring a commemorative poster giveaway while the players once again don their magnificent throwback-style purple and black jerseys.