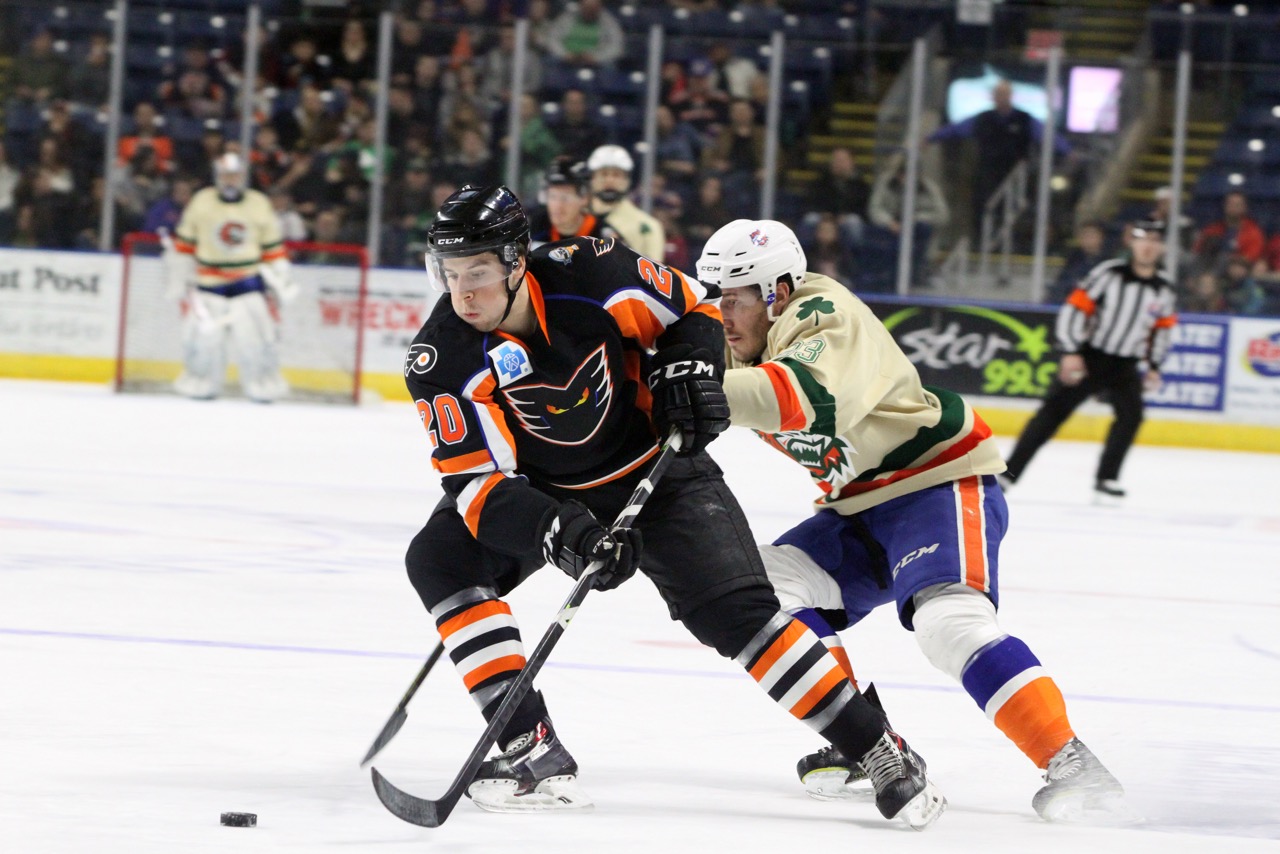 Bridgeport, CT – The Lehigh Valley Phantoms flexed their road muscle once again with another thrilling victory in hostile environs this time scoring four straight to come from behind in Bridgeport and post a 4-2 triumph. The Phantoms put the capper on a perfect 3-0 stretch to open their five-game road-swing via the hard-fought effort against the Sound Tigers.

Trailing 2-0 after one period, the Phantoms found their offensive stride with goals from Nick Cousins (21st), Adam Comrie (5th), Jason Akeson (20th) and Oliver Lauridsen (3rd) while Anthony Stolarz stood tall in his first start in six games turning aside 38 of 40 Bridgeport drives.

With only 15 games now remaining in the regular season, the Phantoms need every point they can get. The perfect six-point week is exactly what the team required in their efforts to scratch and claw their way back into the Eastern Conference playoff picture. 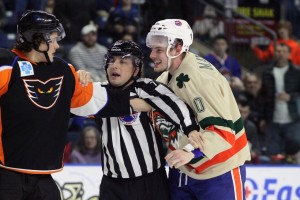 The game took a decidedly nasty and feisty tone with several altercations and scrums while also featuring some of the biggest hitting, from both teams, that we have seen in some time. Several post-whistle scrums ensued and the officials had their hands full for much of the night.

The affiliates of the New York Islanders raced out to a 2-0 advantage in the first period on a pair of goals by Alan Quine. The second of his tallies came on a chip in the slot from a right-wing quick give by former Phantom Harry Zolnierczyk. That goal was mere moments after Jason Akeson put a rebound opportunity off the crossbar.

Nick Cousins smartly pulled a puck back to his forehand while rushing up to the right circle and was able to sneak a quick wrister past Kevin Poulin to the low-glove on the short-side putting the Phantoms on the board seven minutes into the second period. The lamplighter was Cousins’ fourth of the week and team-leading 21st of the season.

Talk about redemption! Trailing 2-1 early in the third period, Adam Comrie came dangerously close to nudging one into his own net on a misplay while all alone in front of Stolarz… But having regained his balance and composure, the big blueliner raced into the attacking zone where he found himself with an opportunity to unload his monster slapshot. He beat goaltender Kevin Poulin to the far post going high glove for his fifth of the season as he scored for his second game in a row.

The exciting blase for Comrie was also the second consecutive game he evened the score with a most timely tally. Comrie completed a big week on the three road games with four points including two goals and two assists as he helped spark the Saturday night Phantoms comeback. 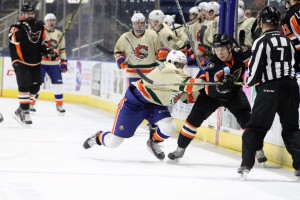 Shortly after a Cousins faceoff win, Jason Akeson rushed forward as part of a 2-on-1 and cranked a slapper through the glove of Poulin powering in his 20th of the season to give the Phantoms their first lead of the night with 13:35 remaining.

From there it was a frantic grind to the finish with the Sound Tigers stepping up their offensive attack to the tune of 15 third-period shots on goal. With 1:30 left, Harry Zolnierczyk’s blast from the right-wing clanged off the underside of the iron, bounced down and then away. The Phantoms were just barely able to cling to their 3-2 advantage as a result.

Facing a 6-on-4 situation in the closing minute, Oliver Lauridsen took matters into his own hands immediately off a faceoff win with an impressive drive the length of the ice for a 190-foot empty-netter. The shorthanded goal was fired dead-center into the back of the net from all the way at the Phantoms end-line.

Lehigh Valley finished the season series boasting a 3-0-1 mark against the Sound Tigers. The Phantoms were out shot in the game 40-25. Bridgeport was held to 0-for-4 on the power play while the Phantoms finished at 0-for-1.

The Phantoms’ five-game road-swing continues next weekend at the Hartford Wolf Pack and Worcester Sharks back-to-back as Lehigh Valley tangles directly with two of the teams they are attempting to chase down in the standings.. Be sure to catch each of Lehigh Valley’s next five games on Fox 1470 AM, online at www.fox1470.com or via the iHeartRadio app. Coverage begins at 6:20 p.m. each night with the Nazareth Pallet Countdown to Faceoff. 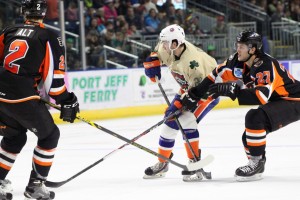 The Phantoms return to downtown Allentown on Sunday, March 22nd at 5:05 p.m. when they welcome the Wilkes-Barre/Scranton Penguins to town for another Pennsylvania rivalry showdown. Sunday’s contest features a FREE youth street hockey stick giveaway for the first 3,000 kids in attendance ages 14 and under. A limited number of tickets for Lehigh Valley’s next home game are available now at pplcenter.com, by calling 610-347-TIXX (8499) or in person at the Mealey’s Furniture Box Office at PPL Center (701 Hamilton).