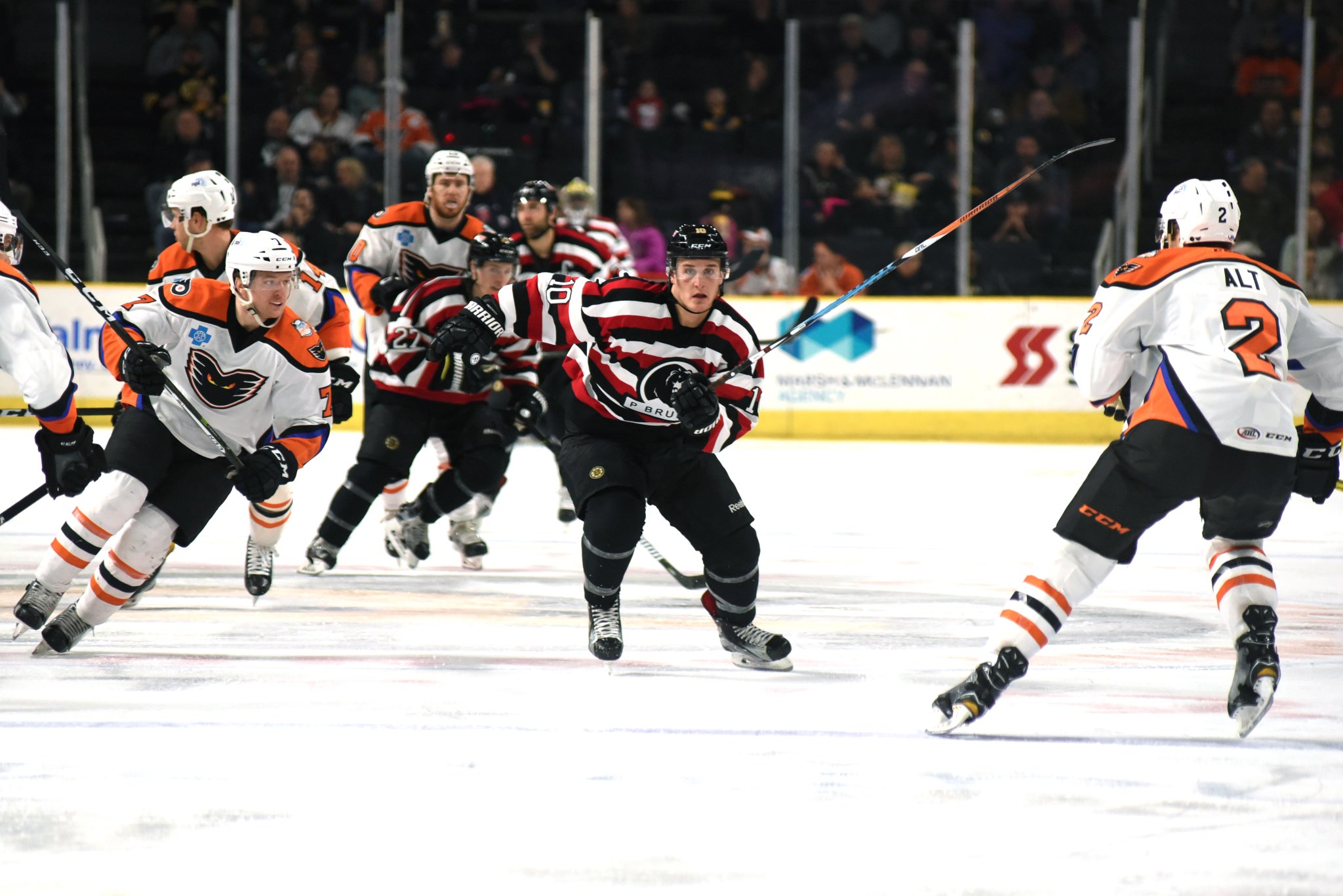 Providence, RI – Chris Conner recorded his 300th career assist while Andy Miele (7th), Mark Zengerle (11th) and Scott Laughton (14th) all found the back of the net but the host Providence Bruins were eventually able to pull away late for a 7-3 win on Sunday afternoon at Dunkin’ Donuts Center. With the weekend finale triumph the P-Bruins were able to catch up to the Phantoms for second place in the ever-tightening Atlantic Division standings.

Corban Knight also contributed with a pair of helpers. Tyrell Goulbourne, upon his return to the Phantoms this weekend, dropped the gloves with Tyler Randell in the third period in one of the best fights of the season. T.J. Brennan reached the 500 Game milestone in the American Hockey League.

The Phantoms finished their successful weekend roadie through New England with a 2-1-0 mark to improve their overall record to 36-17-3. Providence defeated the Phantoms for only the second time in five tries this season and improved to 33-15-9 to catch up to Lehigh Valley in the tightly contested race for playoff positioning . The Phantoms are now virtually even with the Bruins in the standings and trail first-place Wilkes-Barre/Scranton by six points with 19 games remaining before the Calder Cup Playoffs.

Lehigh Valley found themselves trailing 4-1 past the midway point of the second period when the Phantoms found their game and surged back into contention. Mark Zengerle struck with 1:27 left in the second period and then Scott Laughton continued the momentum at 4:07 into the third period to cut the deficit to 4-3. But the Providence Bruins had a quick answer just 45 seconds later on Austin Czarnik’s odd-man rush goal to advance their lead to 5-3. After that, the P-Bruins successfully sealed the contest with two more goals including an empty-netter by Tommy Cross with 3:35 remaining after the Phantoms pulled the goalie in desperate, late efforts to claw their way back again.

Alex Lyon took the loss for the Phantoms with 20 saves on 24 shots. He was removed from the game in the second period in favor of Anthony Stolarz who surrendered two goals the rest of the way on 12 shots.

Jordan Szwarz oened the scoring 8:10 into the game with the deflection of an Alex Grant drive from center-point. The 15th of the season for Szwarz came shortly after a pair of scrambling and impressive stops by Alex Lyon and Travis Sanheim to break up a 3-on-1.

The Phantoms connected on the power play with 3:00 left in the period as Chris Conner would dish from the left slot to Andy Miele in the right circle. The fine kick stop my Miele right to his stick allowed the opportunity for a quick drive before Subban could fully position himself. That play represented the 300th pro assist for Conner and was also helped by Corban Knight.

Providence struck for three goals in the second period. Matt Grzelcyk (4th) sped up to the left circle for a blast at 1:37 into the frame to put the Bruins back on top. Noel Acciari (5th) deflected a Tommy Cross drive at 9:05 to stretch the advantage to 3-1. And then Colton Hargrove (7th) offered a power-play blast from the slot at 13:46 that missed high but bounced back in front off the end glass, over the crossbar, and then back into the cage perhaps off the leg of Lyon.

That unfortunate and unlucky bounce spelled the end of the day for Lyon who was replaced by Anthony Stolarz with the Phantoms trailing 4-1. Shortly before that goal was Nicolas Aube-Kubel racing in on a breakaway with a chance to cut the margin to 3-2 but he was denied off the right pad of Malcolm Subban. Somehow Andy Miele was assessed a holding penalty in his efforts to trail on the play and Providence took advantage with their lucky-bouncer on the subsequent power play.

Lehigh Valley responded with their best and most urgent hockey of the day. Mark Zengerle capped a series of strong offensive-zone cycles and pushes with his rebound conversion from the right circle after Greg Carey’s blast from the left dot ricocheted off the pads of winning goaltender Malcolm Subban.

It was another rebound off the pads of Subban that would close the gap to one. Sam Morin’s entry was taken by Cole Bardreau from the left hash whose offering off the pads of Subban laid on the other side of the crease where Laughton was able to reach forth with his backhand stab. Suddenly it was a one-goal game again at 4-3 and the Phantoms appeared to have all the momentum. Laughton scored goals in back-to-back games to conclude the weekend.

But the Bruins quickly answered just 45 seconds later on a sequence of rapid passes culminating with Austin Czarnik’s second of the season from Noel Acciari and Danton Heinen.

Wayne Simpson chipped a Sean Kuraly feed at 11:20 into the period for his 15th of the season to extend the advantage to 6-3. And then Tommy Cross somehow bounced a long drive from the corner all the way down to the Phantoms vacated net for the empty-net goal that concluded the day’s scoring.

Providence out shot Lehigh Valley 37-24. The Phantoms were 1-for-4 on the power play while Providence went 1-for-5.

The Phantoms conclude their stretch of four straight road games with a Wednesday night rivalry showdown at the first-place Wilkes-Barre/Scranton Penguins. Broadcast coverage on Wednesday will begin at 6:20 each day on 1470-AM, the Phantoms 365 app, and Phantoms Radio 24/7 on TuneIn.

The Phantoms return home Friday, March 10 against the Hershey Bears and Saturday, March 11 against the Utica Comets. Saturday’s game features a postgame skate with the players presented by Big Woody’s. Fans must bring their own skates in order to be allowed on the ice to participate in this terrific fan interaction event. Tickets are available at PPLCenter.com