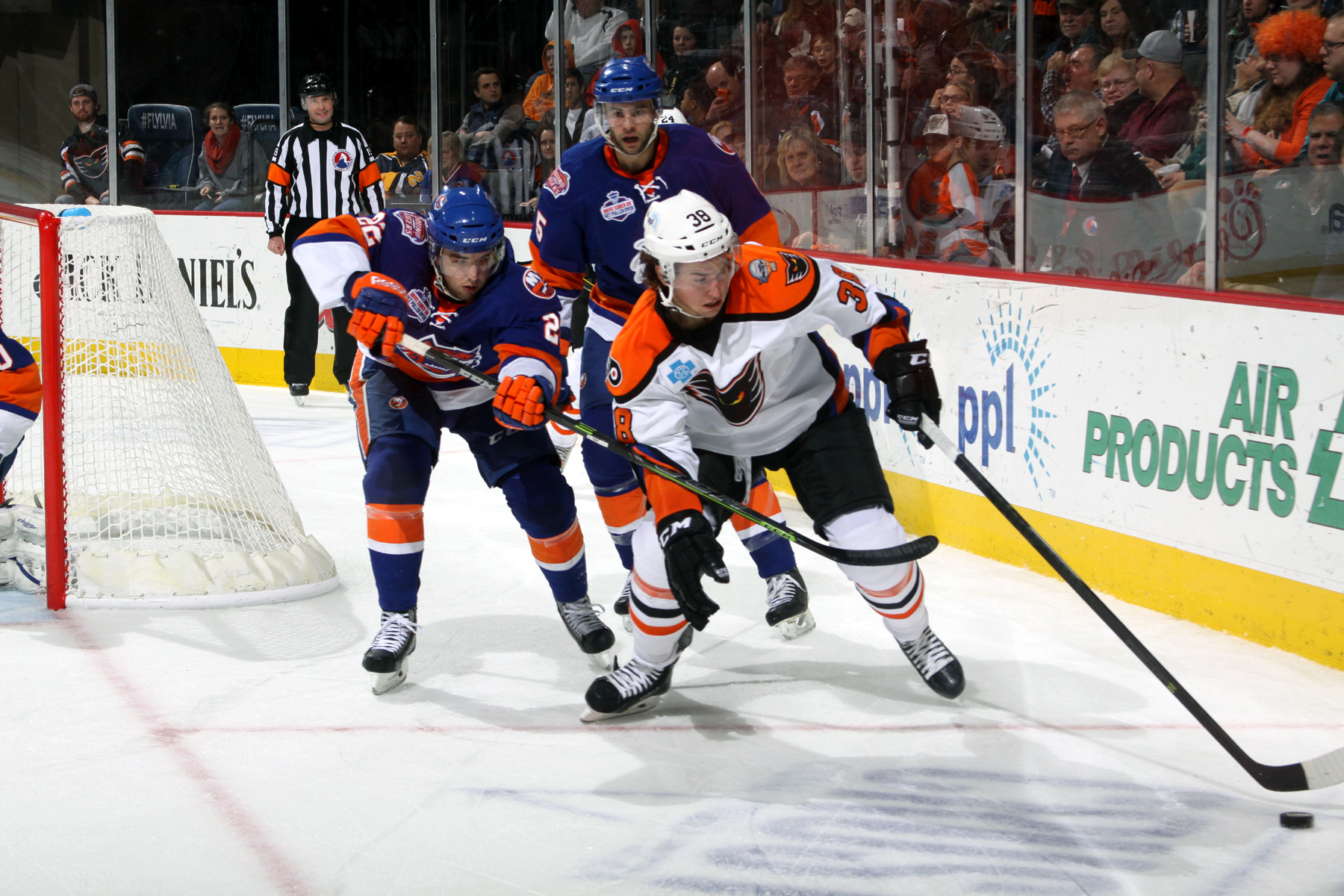 Bridgeport, CT – Jason Akeson established a new Lehigh Valley record with a four-point performance in a Phantoms 5-3 victory at Bridgeport on Sunday afternoon. With two goals and two assists, Akeson took part in all but one of the Phantoms goals and put the capper on the day with a late empty-net strike to seal the victory against the AHL affiliate of the New York Islanders.

The Phantoms also received goals from Andrew Gordon (6th), Darroll Powe (5th) and Brandon Manning (6th) in the fast-paced thriller while rookie Anthony Stolarz acquired his third win of the season with a strong 34-save performance that featured a number of spectacular stops.

The contest was still very much in doubt in the closing minutes. Protecting a one-goal lead, the Phantoms faced a 5-on-3 penalty kill with less than three minutes to go. And Bridgeport would continue with a 5-on-4 after that and eventually a 6-on-4. But the penalty killers for Lehigh Valley were able to grind it out. Brandon Manning, Darroll Powe and Oliver Lauridsen all played key roles during the late 5-on-3 effort. 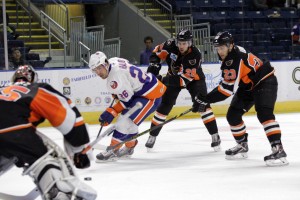 It was an impressive way to complete a grueling weekend in which the Phantoms played three games in three different cities over three days. In fact, the three-game stretch took place in a span of under 48 hours from the beginning of the Friday night game at 7:00 pm to the end of this Sunday matinee at 6:00 pm. Lehigh Valley went 1-1-1 on the weekend as the Sunday win also improved the squad’s overall mark to 10-9-3.

The game was the second of back-to-back contests between the two squads with Bridgeport having come from behind for a shootout win back at Allentown in a tremendously exciting game just the night before.

Lehigh Valley was able to find their power-play stride again clicking at a 3-for-6 rate in this one to equal the most power-play goals they have scored in a game initially established in the first-ever game for the franchise on October 11th at Wilkes-Barre.

C.J. Stretch would strike for Bridgeport four minutes into the game on a power-play blast from the right circle beating Stolarz high-glove.

The Phantoms would respond 11 minutes into the game with Andrew Gordon scopping up the rebound of a Jason Akeson power-play slapper from the high slot. The drive bounded off the chest of Bridgeport goalie Kevin Poulin and Gordon neatly scooped up the loose puck in the slot and guided it on the his forehand neatly around the left-skate of the netminder and into the back of the net.

With the score equal at 1-1 at the first intermission, the stage was set for a wild and back-and-forth middle frame in which the two teams would coming for 35 shots and fine total goals. Lehigh Valley would be out shot in the second period 21-14 but would score three times to Bridgeport’s pair.

The initial goal to spark the scoring onslaught was about as strange as one will ever see. Darroll Powe sent a soft dump-in to the Bridgeport zone that was handled fine by Poulin to the side of the net. Scott Mayfield came back to accept a hand-off from the goalie and then as casually as could be proceeded to backhand the puck right into his own net. He was attempting to knock the puck in behind the goal to set up their break-out and simply missed. So Powe received credit for the goal without even having attempted an actual shot and the Phantoms led 2-1.

Lehigh Valley’s next two power-play strikes came as quickly as they were awarded. Both were scored a mere five seconds after a Bridgeport player had been banished to the sin-bin and were the direct result of Blair Jones face-off wins. Jones won his draw over to Jason Akeson who scored right away for his first of the season in his fifth game since joining the team nine days prior. The goal at 6:23 of the second had come less than 30 seconds after the quirky Powe tally and just like that it was a 3-1 advantage for the visitors.

Bridgeport responded with an even-strength goal by former Phantom Harry Zolniercyzk from the right circle on a cross-ice pass by Aaron Ness at 9:46. His ninth of the year pulled the Sound Tigers to within one goal again at 3-2. “Harry Z” played in parts of three seasons for the Phantoms scoring 20 goals in over 100 games. He also had three goals for the Philadelphia Flyers in 44 career games.

Brandon Manning struck on the power play 16 minutes into the period as the scoring barrage continued. Once again, it was just five seconds into the power play for the Phantoms to successfully light the lamp. Jason Akeson passed the puck from point-to-point earning his second helper of the day to extend the lead to 4-2.

The Sound Tigers took advantage of a late-period 5-on-3 power play to cut the margin to a single tally once again. Hard-shooting defensive prospect Ryan Pulock was blasting away at will with seven shot attempts during their two-man. Eventually, the 2013 first-round selection of the Islanders with one minute remaining in the period for his ninth of the year, tops among all AHL rookies. The highly-touted prospect did not take part in the initial encounter of the two-game weekend series after his brief call-up to the New York Islanders. 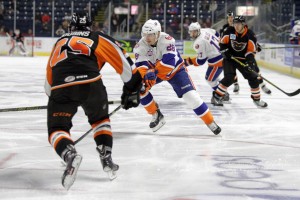 The Phantoms were able to cling to the 4-3 lead throughout the duration of the third period with Stolarz making a few more big stops along the way and then the penalty-kill coming through in the clutch closing moments. Trying to finish off the 6-on-5 to get to the finish-line, Blair Jones lobbed a long clear from his own blue line that missed the empty-net just wide to the left. But the carom off the end-wall came back out to the hard-charging Jason Akeson who rushed past the rest of the Bridgeport defenders to beat the icing call. Facing a sharp angle from the left of the cage, the righty-shooting Akeson still enough of a look to score an impressive empty-netter with 33 seconds remaining to provide the 5-3 final margin.

Bridgeport out shot Lehigh Valley 37-34. The Phantoms were 3-for-6 on the power play while Bthe Sound Tigers went 2-for-9. But ultimately, it was the Phantoms blue-collar work-ethic on the penalty kill that would secure the victory. Bridgeport and Lehigh Valley do not meet again until a March 6th encounter at PPL Center. The Phantoms have a return visit to Bridgeport scheduled for March 14th.

After the arduous three-game stretch this weekend, the Phantoms get to do it all over against next weekend. Lehigh Valley heads to Binghamton on Friday night for the next game on the docket followed by a home game on Saturday vs. the Wilkes-Barre/Scranton Penguins and then an away game on Sunday afternoon in Atlantic City against the Albany Devils.

Saturday’s contest features a “Go Birds” Tailgate with special guests Jeremiah Trotter, Brian Baldinger and the Eagles cheerleaders. The Phantoms will also don specialty jerseys that evening which will be auctioned off following the conclusion of the game. Tickets for next Saturday’s highly-anticipated match-up are available now at the Mealey’s Furniture Box Office at PPL Center (7th & Hamilton), by calling 610-347-TIXX or online at pplcenter.com.