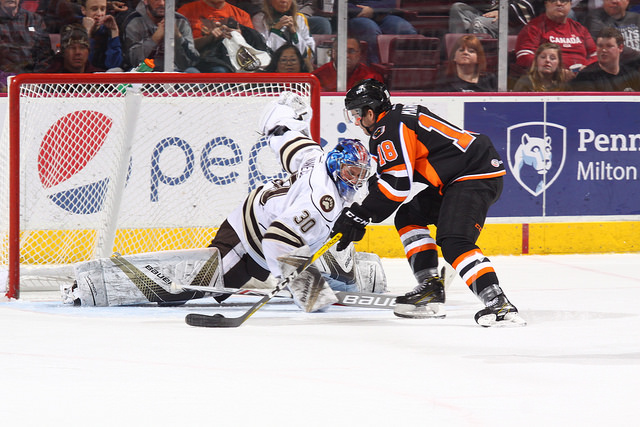 Hershey, PA – Misha Voroboyev notched a goal and an assist in the third period in a late comeback rally for the Phantoms but rival Hershey held on for a 4-2 victory on Saturday night at Giant Center. The two old rivals split their weekend home-and-home series with the home team taking the decision each night. Lehigh Valley sustained a regulation loss for just the second time in the team’s last eight games.

The opener of a three-game road-swing found the Phantoms trailing 2-0 after two periods but the resilient Phantoms cut the Bears advantage to a single tally on two occasions and had another opportunity at the end but found themselves snake-bit on their efforts to cash in on a late 6-on-4 for the final 85 seconds of the match. 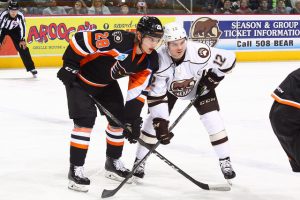 The rookies provided the offense for the Phantoms with 20-year-old Russian talent Misha Vorobyev (5th) recording his first career multi-point game while 21-year-old Swede Oskar Lindblom (6th) converted for his third goal in the last eight games. Dustin Tokarski turned in a 19-save effort in taking just his second regulation loss as his record moved to 7-2-2. Vitek Vanecek made several showstopping denials of the Phantoms to preserve the victory and earn #1 Star of the Game honors with his 24-save performance.

Lehigh Valley’s comeback efforts were impacted by a shortened bench with forwards Mike Vecchione and Colin McDonald both departing the contest early with apparent injuries. The game also marked the return of defensemen T.J. Brennan (back from the Flyers) and Reece Willcox who had not played since an injury on November 22.

The Phantoms had a nice opportunity to take early control of the game thanks to consecutive penalties against the Hershey Bears but with 1:29 of 5-on-3 Vitek Vanecek stood tall and denied the visitors the opening strike.

The Bears subsequently began the scoring 7:36 into the game on their own power play when rookie defenseman Lucas Johansen (5th) rushed to the crease all the way from the point receiving a feed on a forecheck win by big forward Mathias Bau. Johansen’s second goal in as many games on the weekend set against the Phantoms gave the Bears a 1-0 lead. That ended Lehigh Valley’s penalty-kill streak at 24 in a row and represented the first power play goal allowed by the Phantoms since their last road game on November 24 at Springfield. 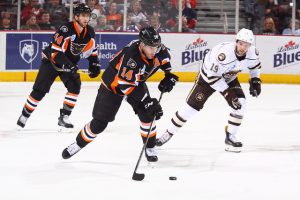 Later in the first period, Danick Martel cut for the net from the right-wing after an interception by Nic Aube-Kubel but Vanecek denied the league’s top goal-scorer point-blank with a sparkling right-ad save to preserve the 1-0 margin. Greg Carey later found a turned over puck in the high slot and offered one of his big slap-shots but again Vanecek’s right pad would deny the Phantoms.

The Bears doubled their advantage early in the second period on the 11th of the season for the league’s top point producer, Chris Bourque. Aaron Ness offered a left-point shot-pass that was deflected from the left of the cage by Wayne Simpson off the pads of the rotating Tokarski and out in front where Bourque was able to dive in and knock in the loose biscuit at 4:53 of the middle stanza.

Late in the period came a crunching check by Hershey’s Jonas Siegenthaler against Mike Vecchione along the end-boards. Aube-Kubel stood up for his fallen teammate in a fight against Siegenthaler. But Vecchione was not seen in the game after that.

The Phantoms broke through against Vanecek for a pair of goals in the early minutes of the third period beginning with Oskar Lindblom’s conversion on the slot on the rebound of a Vorobyev shot from the left circle off the shoulder of the Hershey netminder. Lehigh Valley had momentum and was on the board at 2:13 into the third period cutting Hershey’s advantage to 2-1.

But the Bears were not long for a response and just 91 seconds left Dustin Gazley’s pass across bounced through on a deflection for Garrett Mitchell (5th) on the right of the cage who was running out of angle but still somehow played a bank off the hip of Tokarski for a 3-1 lead. 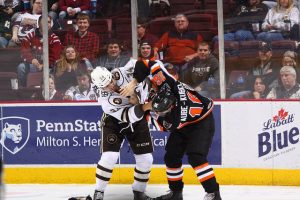 The Phantoms again trimmed Hershey’s lead down to size this time responding less than a minute later. Matt Read from the right wing connected smartly with Vorobyev in the slot for a chip at 4:48 that pulled Lehigh Valley to within 3-2. Danick Martel also assisted on the play.

Hershey scored a key goal with 10:09 remaining in the third period when Riley Barber nudged a puck from behind the net out in front to Tyler Graovac in the slot who buried his one-timer for the final score of the night.

The Phantoms had a late surge trying to cut the two-goal lead down to size again but Vanecek and the Bears held on even through the late-game 6-on-4.

Lehigh valley out shot the Hershey Bears 26-23. Hershey was 1-for-5 on the power play while Lehigh Valley finished at 0-for-5.

The Phantoms travel down south for a two-game series at the Charlotte Checkers on Tuesday and Wednesday evenings in a pair of 7:00 p.m. engagements. It’s the first visit to North Carolina since the Adirondack Phantoms traveled to Charlotte in the 2010-11 season.