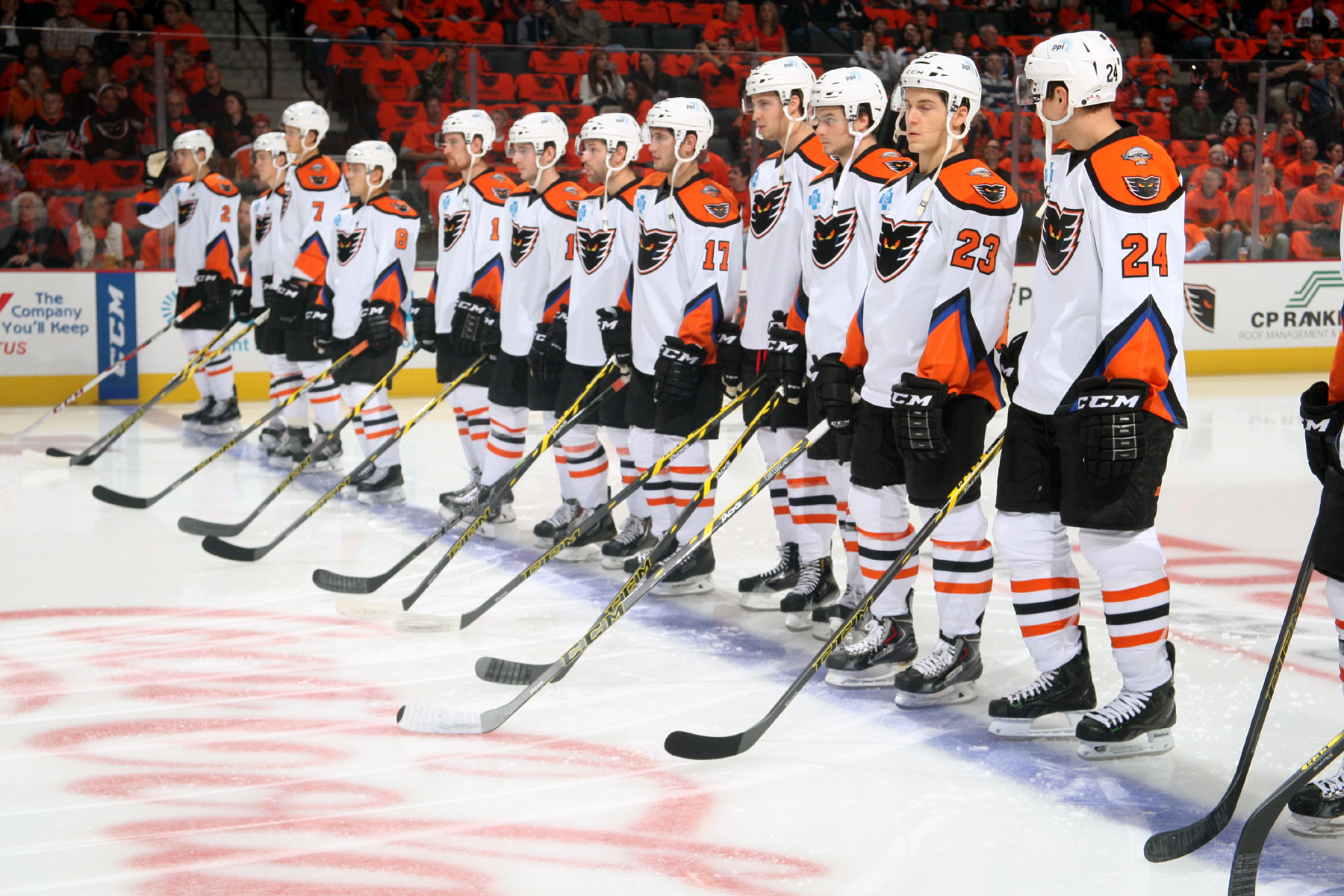 Lehigh Valley, PA – Scott Laughton fired home the game-winning goal in overtime at Binghamton Saturday night as Lehigh Valley prevailed in a wild 5-4 contest. The topsy-turvy affair saw the B-Sens rally from a two-goal deficit in the final 15 seconds of regulation on a pair of dramatic goals by Derek Grant. The Phantoms had trailed initially by scores of 1-0 and 2-1 before a three-goal outburst in the second period vaulted them to a 4-2 lead.

Benefiting from all of the open-ice in the AHL’s new 3-on-3 overtime rule, the Phantoms never gave up possession of the puck after winning a draw with about two minutes remaining. Brandon Manning smartly carried the puck back into his own zone to avoid pressure allowing the Phantoms to rush back in and set up Laughton’s drive from the right circle that deflected off the stick of defenseman Alex Grant and then through Andrew Hammond for the game-winner.

Laughton appears to love the open-ice. All six of the goals he has scored in his AHL career (including one with the Phantoms two seasons ago plus his five goals this season) have happened while play was not the full 5-on-5. Laughton’s pro goals have included two on the power play, two while short-handed, one goal at 4-on-4, and now this one at 3-on-3.

Rob Zepp picked up yet another win to improve to 4-0-0. Not too shabby for a guy who hadn’t even played in the AHL in over a decade and only had one win in his limited opportunities back in the early seasons of his career.

The East Division leading Phantoms improved to 4-1-0 while the Binghamton Senators record moved to 2-2-2.

It was a crazy night in Binghamton for the first of 10 meetings between the East Division rivals. And the Phantoms were able to push through some significant adversity with a shortened roster due to early-game developments. Mark Alt went down with an upper-body injury just five minutes into the game and did not return. And Zack Stortini was assessed a game misconduct as a third-man in during a fight before the first period had even reached the midway point.

This wasn’t going to be easy. Now down a defenseman as well as a forward, head coach Terry Murray had to improvise some lines and defensive pairings. Brandon Manning had a strong game and gobbled up a lot of minutes, perhaps more than any other skater.

After a slow Phantoms start in which Binghamton raced out to a 1-0 lead on a 6-0 shots advantage, the Phantoms with their now-shortened bench would turn the tables on the Senators and dictate the pace of play for the rest of the first, with 14 shots in the next 10 minutes, and then much of the second period with 17 more blasts on goalie Andrew Hammond.

Nick Cousins put the Phantoms on the board with a power-play goal late in the first period to equalize matters at 1-1 but J.G. Pageau’s goal in the closing seconds of the frame gave Binghamton a 2-1 lead at the break.

Lehigh Valley’s 17 shots in the second period resulted in three goals to take a 4-2 lead. Robert Hagg’s power-play drive from center-point tied the score at 2-2. It was the first of the season for the teenage defenseman from Sweden and the second of his pro career.

Then Scott Laughton connected with Andrew Gordon on a pretty goal in which both players showed off backhand spinning skills. Laughton’s backhand spinorama move from the left circle resulted in a pass that was a bit behind Gordon rushing into the slot but the veteran forward was able to stop the pass behind him, circle around to get to his forehand, and then convert on his 150th career AHL goal and his first as a Phantoms.

Austin Fyten made it 4-2 a few minutes later with assists from Jay Rosehill and Steven Delisle.

The Phantoms appeared to be all set to close it out for their fourth win of the season but the Derek Grant Show in the closing seconds brought the Veterans Memorial Arena crowd to a frenzy in the wild ending of regulation. The fifth-year pro of Michigan State scored with 14.1 seconds left to make it a one-goal game. And then he scored again with 5.2 seconds left on a rebound to the back-door.

Grant came dangerously close to a natural hat trick with a couple good chances in the opening seconds of the overtime. Laughton’s game-winner was the only shot on goal for the Phantoms in the entire overtime while the Senators had five. Zepp was the difference-maker yet again.

Lehigh Valley went 2-for-4 on the power play to improve on their conversion rate which was already tops in the league at 32% entering the game. The Phantoms out shot the Senators 41-40 in the fast-paced and action-packed tilt.

The Phantoms look to finish a perfect three-in-three weekend at the Hershey Bears (4-2-0) on Sunday evening at 5:00 at Giant Center. It is the first of six meetings to ChocolateTown for the Phatnoms who are 87-88-10 all-time against the Bears in 185 previous meetings of the rivalry dating back to the beginning of the Philadelphia Phantoms in 1996.

The radio broadcast of Sunday’s game will switch stations and can be heard on 790 WAEB.

The Phantoms then return to PPL Center this Wednesday when they welcome the rival Wilkes-Barre/Scranton Penguins to town for the first time this season. On Saturday night, Lehigh Valley will host the Hartford Wolf Pack, AHL affiliate of the New York Rangers. Tickets are available now at the Mealey’s Furniture Box Office at PPL Center (701 Hamilton Street), by calling 610-347-TIXX (8499) or online at pplcenter.com.