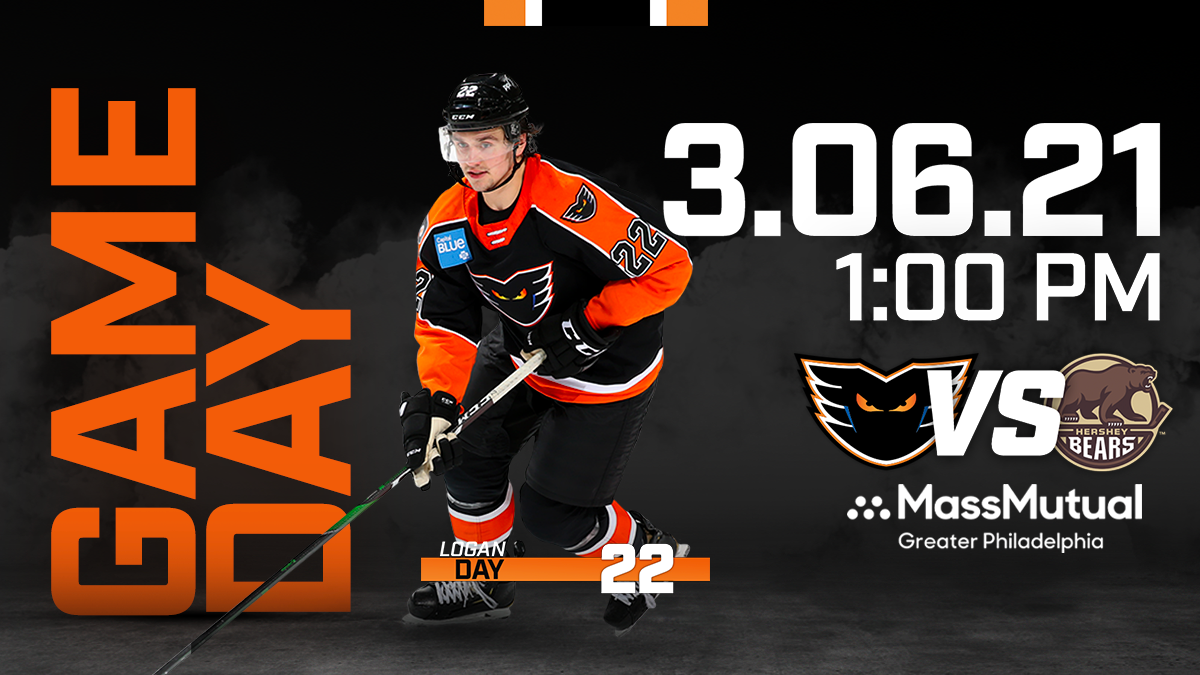 Today’s Game – The Lehigh Valley Phantoms travel to Giant Center in Hershey for a third visit this season looking to stay perfect against the Bears in the finale of a home-and-home series. Today is the ninth game of the season and Game 4 of 14 between the two rivals. The Lehigh Valley Phantoms posted a pair of overtime victories at Hershey on February 6 and February 14 with Ryan Fitzgerald and David Kase posting the winners. The Phantoms rallied from behind in the third period in both of their Chocolate Town comebacks and did the same with two late goals on March 3 at PPL Center in a 4-3 regulation win. The Phantoms are 3-0-0 against Hershey this season while the Bears are 0-1-2 against Lehigh Valley.

Last Time Out – Lehigh Valley stormed back in the third period to post yet another come-from-behind win with a 4-3 triumph over the Hershey Bears on Wednesday night at PPL Center. Cal O’Reilly tied the game with the deflection of a Samuel Morin shot and then Derrick Pouliot’s booming slapper from the left point beat Pheonix Copley just 1:39 later with only 5:59 remaining to put the Phantoms back in front. Linus Sandin and Tanner MacMaster also registered goals while Garrett Wilson posted a two-assist game. Felix Sandstrom (23/26) notched his first-ever win at PPL Center. Isaac Ratcliffe returned from injury to play in his first game of the season and assisted on Tanner MacMaster’s goal. Tyson Foerster returned after almost a month layoff to play in his first game since an injury in Hershey in the season opener on February 6. The Phantoms surrendered a pair of shorthanded goals to Hershey in the game with Martin Fehrevary and Axel Jonsson-Fjallby lighting the lamp.

Get Your Tickets, Here!! – The Phantoms and PPL Center are pleased to announce they are “Back to Live.” Lehigh Valley Phantoms home games at PPL Center will now be held at 15% capacity. Tickets for the upcoming March 13 game will go on sale to the general public on Tuesday, March 9 at 11:00 a.m.

Max Effort – 26-year-old winger Max Willman was named the CCM/AHL Player of the Week on March 1 for his tremendous stretch that included a pair of multi-goal games, an overtime winner, and five goals in three games in total during the previous week. Willman also had a four-game goal streak dating back to the previous week which is equal to the longest in the AHL this season. Willman is a second-year pro but is still technically an AHL rookie having played 24 games with the Phantoms last season thus falling short of the official non-rookie threshold of 25 AHL games entering this season. Willman is the first Phantom in five years to win the AHL Player of the Week honors. Colin McDonald was the last to be so honored on January 21, 2016 shortly after a five-point game that included a hat trick as part of a ten-point week. Two Phantoms players won the award in the team’s inaugural season in Lehigh Valley; Nick Cousins on March 15, 2015 and Scott Laughton on October 21, 2014 after scoring the first official goal at the brand new PPL Center.

Wisdom Beyond His Years – The youngest player in Phantoms franchise history is showing tremendous ability and wisdom beyond his years in his first-ever professional games. Zayde Wisdom scored two goals in consecutive games on February 14 and February 20 and scored goals in consecutive games on February 19 and 20 to stay tied with Max Willman for the team lead with six goals apiece. Willman’s goal on February 19 at Wilkes-Barre was perhaps one of the best in Lehigh Valley history maintaining possession despite two players trying to bring him down and then finishing with an elevated backhander while he was blasted from behind. He showed off his backhand skills again the next night with a nifty behind-the-back pass that connected with Max Willman for the team’s first goal of the night.

Special Teams – The Lehigh Valley Phantoms surrendered a power-play goal on February 24 at Binghamton which broke their perfect penalty kill this season but they are still tops in the AHL at 95.5% having killed 21 of 22 opponent advantage opportunities. The Phantoms power play had been the opposite of that, rating last in the league before coming alive this past Saturday with a pair of man-up markers. Zayde Wisdom has scored two of his six goals on the power play. The Phantoms are 3-for-34 on the man-advantage for just 8.8% which rates 26th out of 28 in the AHL.
Hershey’s power play is 4-for-31 for 12.9% which ranks 21st. The Bears are second in the AHL on the P.K. trailing only the Phantoms. Hershey has allowed 3 out of 36 for a 91.7 kill percentage.
Hershey is 0-for-8 against the Phantoms but has scored a pair of shorthanded goals against Lehigh Valley. The Phantoms are 0-for-12 against the Bears.

Let’s Stay Late – The Lehigh Valley Phantoms have played five overtimes in eight games to lead the AHL in extra-period hockey. Lehigh Valley is tied for the most overtime wins (3) and also the most overtime losses (2). The Phantoms also went to overtime in each of its first four away games before the streak finally ended on February 26 at Wilkes-Barre/Scranton. Ryan Fitzgerald, David Kase and Max Willman have scored overtime winners for the Phantoms while Binghamton’s Brett Seney and Wilkes-Barre/Scranton’s Frederick Gaudreau have victimized the Phantoms in the 3-on-3 session.

Scouting the Bears – Goalie Zach Fucale recorded a shutout vs. Binghamton on Saturday in the team’s most recent win. Garrett Pilon, son of former NHL’er Rich Pilon, leads the team with eight points including seven assists. 20-year-old first-rounder Connor McMichael has four goals including a hat trick against the Penguins a couple weeks ago. Kody Clark, son of former Toronto Maple Leaf Wendall Clark, has three goals and one assist. Riley Sutter is the son of former Philadelphia Flyer Ron Sutter who was teammates with Phantoms assistant coach Kerry Huffman. 37-year-old captain Matt Moulson has played over 1,000 pro games. He scored 30 goals for head coach Scott Gordon when both were with the New York Islanders in 2009-10 which began his streak of three-straight 30-goal campaign with the Isles.
Garrett Pilon and Riley Sutter were teammates on the Everett Silvertips with Phantoms defenseman Wyatte Wylie and Flyers goalie Carter Hart.

Upcoming – The Phantoms continue their road-swing on Monday evening at 5:00 p.m. at Wilkes-Barre and Wednesday night at 7:00 p.m. at the Binghamton Devils. Lehigh Valley returns to PPL Center on Saturday, March 13 against Binghamton. Tickets go on sale Tuesday, March 9 at 11:00 a.m.