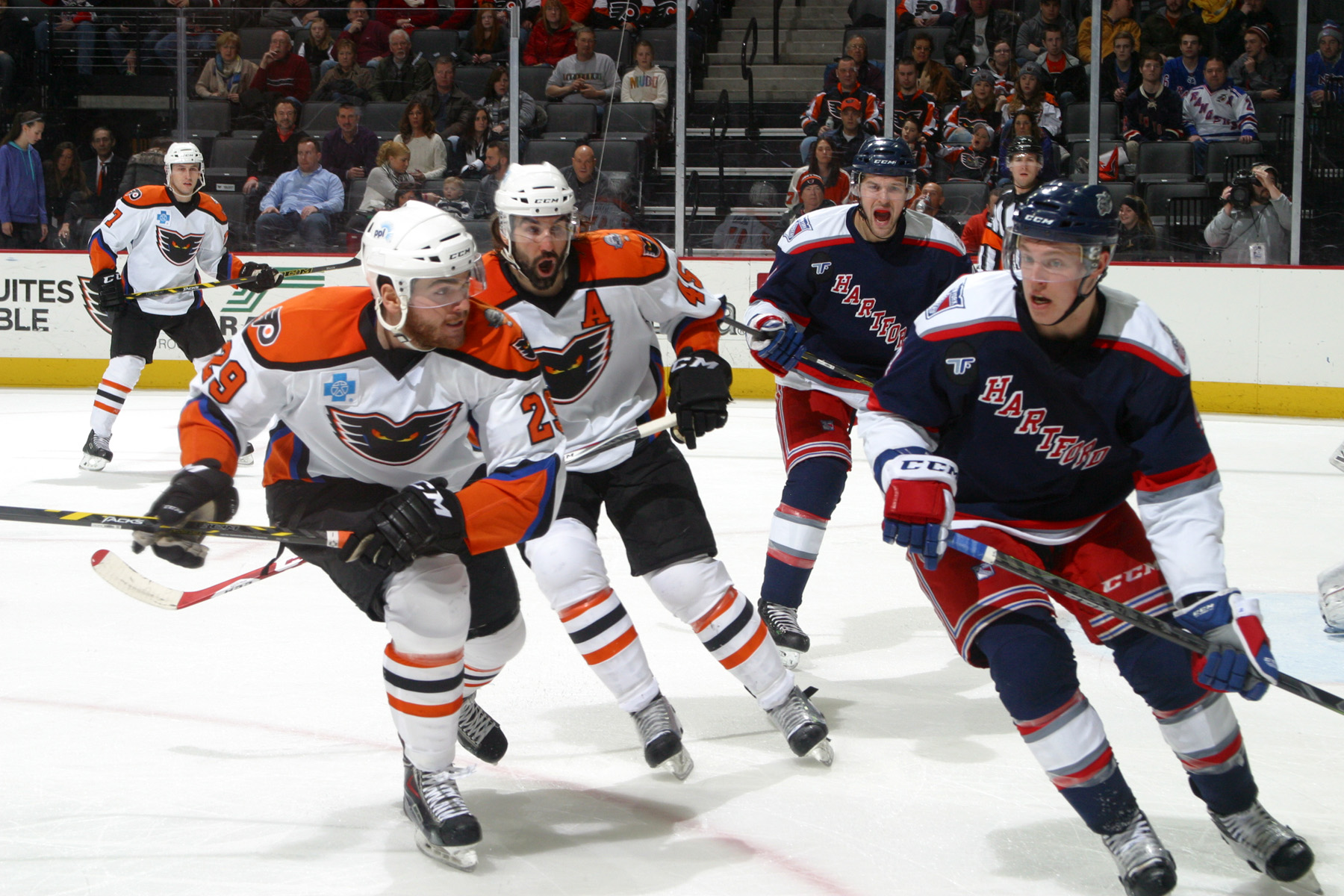 Hartford, CT – Newcomer Cole Bardreau scored in his professional debut and Blair Jones also tallied in his first game in two months but the Phantoms late comeback efforts fell short at Hartford in a 3-2 loss to the Wolf Pack on Friday night. Lehigh Valley’s three-game win streak came to a close as former Phantom Yann Danis victimized his ex-teammates with a 27-save performance.

For the second consecutive Connecticut visit, the Phantoms fell behind 2-0 in the opening period. But this time the Phantoms were unable to repeat the comeback effort of last Saturday at Bridgeport when Lehigh Valley tallied the next four. The game was the opener of a three-in-three weekend for the Phantoms and was also the fourth game, and first loss, of a five-game road-trip for Lehigh Valley.

The Phantoms have 15 games remaining in the next 30 days to conclude the 2014-15 regular season. They trail eighth-place Springfield by eight points for the final playoff spot but hold three games-in-hand on the fading Falcons who did not gain any further ground in the race due to a 3-1 loss to Bridgeport.

Chris Mueller (12th) and Oscar Lindberg (20th) scored power-play goals about three minutes apart late in the first period as the Wolf Pack took early control of the game. Lindberg had assisted on the first goal that Mueller scored before blasting in a lamplighter of his own in the slot on some quick tic-tac-toe passing.

Cole Bardreau put the Phantoms on the board seven minutes into the second period on a deflection of a Steven Delisle shot from the point. The 21-year-old out of Cornell University had just signed a contract with the Flyers last week and then an Amateur Tryout contract with the Phantoms a few days ago. Centering Lehigh Valley’s fourth line, the Fairport, NY (near Rochester) native perfectly chipped Delisle’s drive to the right skate of Danis in the memorable evening.

Ryan Bourque scored early in the third period just on the other side of a Phantoms power play. His right-circle drive after a cross-ice give by Michael Kostka was powered through the glove of Rob Zepp for a 3-1 Hartford lead.

Blair Jones drove from the right corner toward Yann Danis to stuff in his sixth of the season during a delayed penalty call against the Wolf Pack. Jones was playing for the first time since January 17th when his lower body injury kept him out of action for eight weeks.

The Phantoms played their best hockey in the third period and had the Wolf Pack on their heels but were unable to drive in the equalizer past Danis.

The five-game road trip concludes Saturday night at the 9th place Worcester Sharks who, like the Phantoms, are trying to claw their way back into the top eight in the Eastern Conference.

Hartford went 2-for-4 on the power play while the Phantoms finished 0-for-3. The Wolf Pack out shot Lehigh Valley 32-29.

The Phantoms return to PPL Center on Sunday evening with a 5:05 clash against the Wilkes-Barre/Scranton Penguins in the opener of a four-game homestand. Sunday’s game is Youth Street Hockey Stick Night for the first 3,000 kids age 14 and younger.