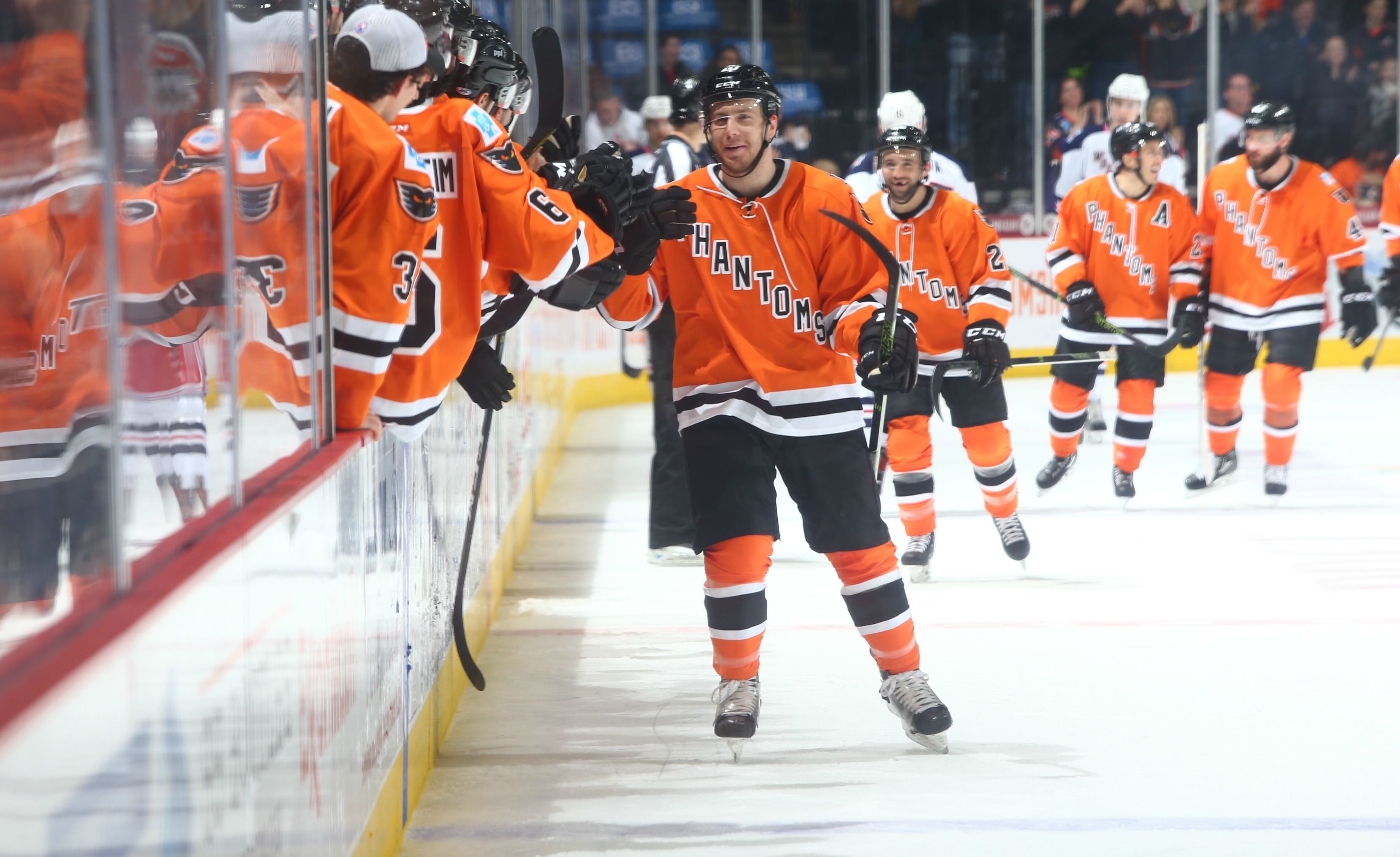 Lehigh Valley, PA – The Lehigh Valley Phantoms received goals from six different skaters Saturday evening and Anthony Stolarz turned in an impressive 40-save performance as the Phantoms surged past the Hartford Wolf Pack 6-4 in front of 8,683 fans inside PPL Center. 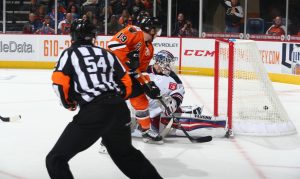 With the win, Lehigh Valley improved to 33-16-2 overall this season and maintained sole possession of second place in the tightly-contested Atlantic Division. The Phantoms now rank third among all AHL clubs in total wins (33) as they moved to an impressive 18-7-1 on home ice this season.

Carey’s conversion was his team-leading 23rd tally of the year as he moved into a tie for second among all AHL skaters in total goals this season. Meanwhile, Brennan’s goal moved him into sole possession atop the goal-scoring chart for AHL blueliners while Miele’s marker continued a torrid scoring stretch for the center which has seen him compile 18 points (3 goals, 15 assists) over his last 18 games. 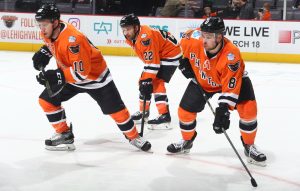 Miele, Martel and Brennan each registered multi-point outings with a goal and an assist each in front of Stolarz who notched his third game with 40 or more saves this season. With Saturday’s triumph, the third-year netminder improved to 12-6-0 overall this year.

Saturday’s game marked the fourth straight standing room-only sellout for the Phantoms inside PPL Center and the team’s 11th capacity crowd this year. 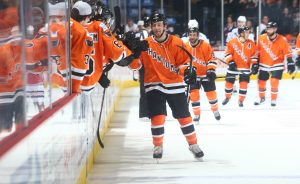 Hartford opened the scoring just over three minutes into the contest when Justin Fontaine snapped in his eighth goal of the season with a quick wrist shot from the slot. Steven Kampfer and Chris Brown assisted on the even-strength strike notched 3:01 into the first period.

The Phantoms didn’t let the Wolf Pack’s early conversion phase them though as Lehigh Valley was able to level the contest just over four minutes later when, while on the power play, Carey slammed home his team-leading 23rd goal of the year. Chris Conner and Miele assisted on the man-advantage marker scored 7:18 into the opening frame, which came as a result of a giveaway by Hartford goaltender Brandon Halversion right in front of his own cage.

The Phantoms then grabbed their first lead of the night just past the midway point of the first period when, after a relentless forecheck that generated a series of quality scoring chances, McDonald unleashed a rocket from the right point that sizzled into the back of the Wolf Pack net for his 18th goal of the season. Travis Sanheim and Scott Laughton assisted on the captain’s conversion, which came 13:12 into the opening period of play. 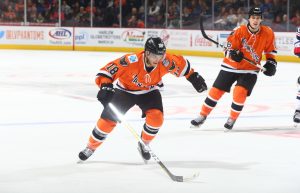 Lehigh Valley doubled its lead early in the middle stanza when a brilliant cross-ice saucer pass from Martel connected with Brennan who promptly snapped home his 14th goal of the year. Brennan’s tally, which came 2:03 into the second period, was his 127th career AHL conversion moving him to within just two goals of Hall of Fame defenseman Bryan Helmer for second place all-time among AHL blueliners.

The Wolf Pack didn’t back down though and were able to level the contest with a pair of goals just over six minutes apart. First, Robin Kovacs garnered his second goal of the season when he deposited Malte Stromwell’s cross-crease offering 3:05 into the second period. Then, Hartford evened the game at three apiece 9:29 into the middle frame when Marek Hrivik converted his 12th goal of the year and second in as many nights.

The Phantoms didn’t relent though and quickly re-established their two-goal advantage with a pair of markers less than two minutes apart before the close of the second period. First, after a blocked shot in the defensive zone, Fazleev was able to spring clear on a breakaway before converting his fourth goal of the season. The unassisted even-strength strike came 14:15 into the middle frame. Then, with just under four minutes left in the frame, Martel darted into the slot before snapping in his 13th goal of the year. Corban Knight collected the only assist on the five-on-five tally generated 16:05 into the second period.

The Wolf Pack sliced Lehigh Valley’s lead in half less than six minutes into the third period when Steven Fogarty landed his fifth goal of the season but the Phantoms promptly regained their two-goal for good just past the midway point of the third period when Miele connected on the power play for his sixth goal of the year. Brennan and O’Neill assisted on Miele’s marker, which capped the scoring in Saturday’s back-and-forth affair.

The Phantoms conclude this week’s action on Sunday when the team invades the Utica Memorial Auditorium for a 3:00 p.m. showdown with the Utica Comets.