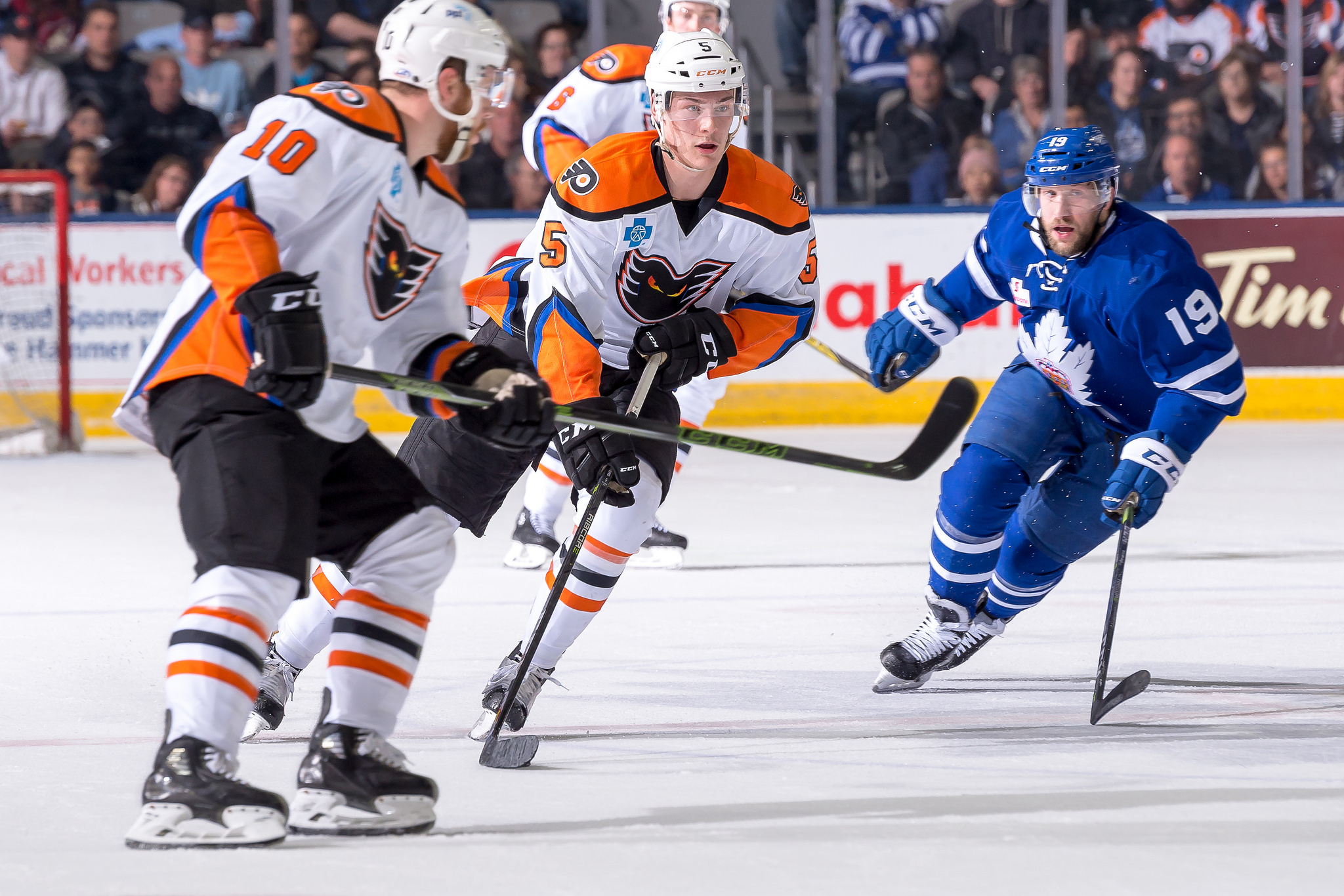 Phantoms With Chance to Even Series in Game 2 Sunday

Toronto, Canada – Phil Myers (3rd) notched a goal and an assist while Chris Conner (5th) and Tyrell Goulbourne (2nd) also found the back of the net for the Lehigh Valley Phantoms Saturday afternoon but it was the Toronto Marlies who were able to prevail in a thrilling, back-and-forth 4-3 decision in front of 7,931 fans inside Ricoh Coliseum in Game 1 of the Eastern Conference Finals. 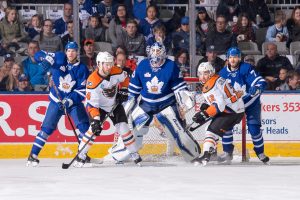 Toronto now leads the best-of-seven series one game to none. The Phantoms will have a chance to even the series and earn a road split Sunday afternoon when the two teams reconvene for Game 2 in Toronto. Phantoms fans are encouraged to attend the team’s official Playoff Watch Party at Chickie’s & Pete’s at PPL Center. Doors will open at 3:30 p.m. with food and drink specials set to begin at 4:00 p.m.

After tomorrow, the series will shift to PPL Center in downtown Allentown for Games 3, 4 and 5 (if needed). Tickets for all three games at PPL Center next week are available now by clicking HERE.

Saturday’s game marked the first appearance for the Phantoms in the Eastern Conference Finals since the Philadelphia Phantoms faced off against the Providence Bruins during the 2005 Calder Cup Playoffs. 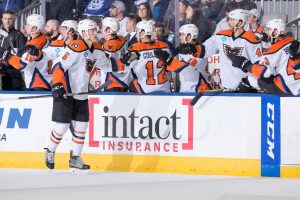 Alex Lyon turned in another strong performance between the pipes for the Phantoms as he denied 28 of Toronto’s 32 total shots in moving to 6-2 this postseason. Toronto netminder Garret Sparks earned the victory in goal for the Marlies after turning aside 26 of Lehigh Valley’s 29 shots on goal.

With Saturday’s win, Toronto remained undefeated at home this postseason as the Marlies are now 6-0 when skating at Ricoh Coliseum during the 2018 Calder Cup Playoffs. Meanwhile, the Phantoms are now 4-2 on the road in these playoffs. 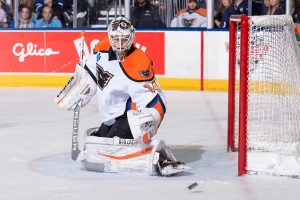 Toronto opened the scoring less than seven minutes into the series opener when, while on the power play, Andreas Johnsson’s pass into slot was expertly deflected by Aaltonen into the back of the Lehigh Valley cage for Aaltonen’s second goal of the postseason. Timothy Liljegreen collected the secondary assist on the man-advantage marker scored 6:44 into the first period as the Marlies opened the scoring for the seventh time in 10 games in these playoffs. Toronto is now 7-0 when scoring first in these playoffs.

Toronto doubled its lead less than six minutes later when Johnsson connected with Aaltonen again. After the Phantoms were unable to clear the puck out of their defensive zone, Johnsson fed a puck between the face-off dots for Aaltonen who slipped a shot between Lyon’s pads for his second goal of the game and third this postseason. Johnsson earned the only assist on the even-strength strike netted 12:03 into the opening frame.

The Phantoms sliced Toronto’s advantage in half before the first intermission though with a power play goal of their own. With Marlies’ forward Mason Marchment in the penalty box for roughing, Colin McDonald was able to feed a pass to the right point where Myers unleashed a sizzling slap shot that found its way through traffic and into the back of the Toronto net for Myers’ third conversion this postseason. McDonald and Mike Vecchione assisted on the man-advantage marker notched 16:04 into the first period as both sides converted on their lone power play chances in the opening stanza. 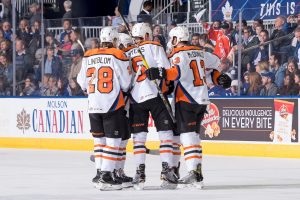 Lehigh Valley then leveled the contest less than a minute into the second period when a well-timed poke check by Travis Sanheim started an odd-man rush the other way resulting in Goulbourne’s second goal of the postseason. Corban Knight garnered the primary assist on Goulbourne’s conversion while Sanheim nabbed the secondary helper on the five-on-five conversion scored just 35 seconds into the middle stanza.

The Phantoms then grabbed their first lead of the series just past the midway point of the second period when Lehigh Valley converted its third straight marker. While on the power play, Myers stretched a pass on the left wing to Conner who unleashed a perfect shot into the upper right-hand corner of the goal for his team-leading fifth goal of the playoffs. Myers earned the only assist on the man-advantage tally converted 12:57 into the second period.

The Marlies were able to level the contest before the second intermission though thanks to Ben Smith’s second goal of the postseason. Chris Mueller picked up the primary assist while Dmytro Timashov grabbed the secondary assist on the five-on-five conversion netted 16:24 into the middle frame.

Toronto regained the lead early in the third period when a quick snap shot from the left wing by Adam Brooks sizzled over Lyon’s right shoulder and into the back of the Lehigh Valley net for Brooks’ second goal of the playoffs. Trevor Moore and Marchment assisted on the eventual game-winning marker buried 3:18 into the final frame of regulation.

In the midst of the club’s 12th postseason appearance in franchise history, the Phantoms have captured two Calder Cup Championships (1998, 2005) and carry a 75-55 overall mark in 130 career AHL postseason outings. This is the fifth regular season division title in franchise history and the team’s first since arriving in the Lehigh Valley.