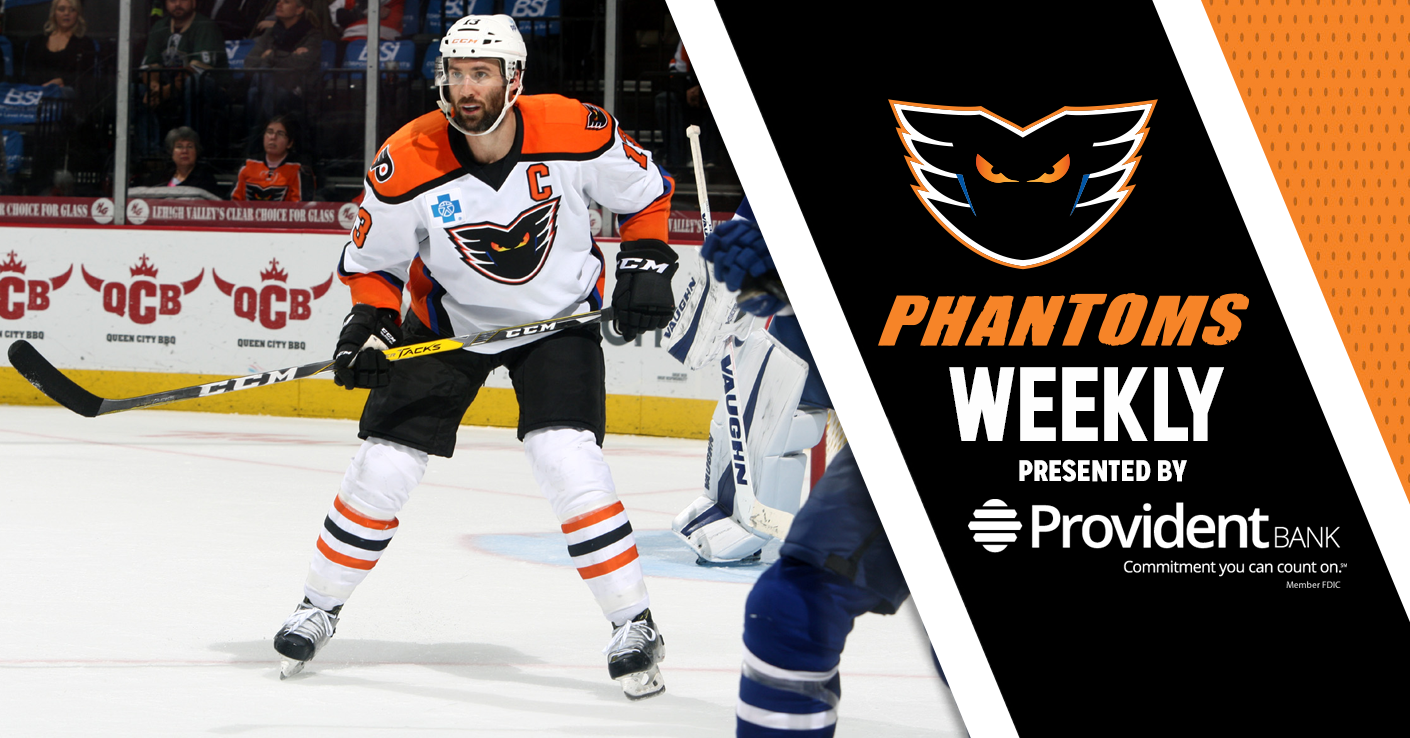 Atlantic Division Champions for the 2017-18 season, the Lehigh Valley Phantoms (47-19-5-5, 104 pts. during the regular season, 7-4 in 2018 Calder Cup Playoffs) continue their quest for the 2018 Calder Cup Championship this week as they continue their Eastern Conference Finals series with the Toronto Marlies. In the midst of their 12th postseason appearance in franchise history, this is the Phantoms first trip to the Conference Finals since 2005. 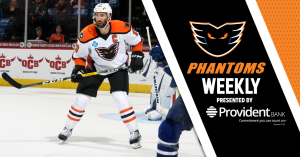 After a pair of tightly-contested showdowns at Ricoh Coliseum in Toronto last weekend, the best-of-seven series now shifts to PPL Center in downtown Allentown for Games 3, 4 and 5 (if needed) this week. Playoff action resumes this Wednesday, May 23 at 7:05 p.m. with Game 3 between Lehigh Valley and Toronto with the Phantoms looking to use their home-ice advantage to slice the Marlies’ 2-0 series lead in half. Tickets for Wednesday’s highly-anticipated postseason showdown are available now by clicking HERE.

Game 4 will then take place on Friday, May 25 at PPL Center with Game 5 slated for Saturday, May 26 in downtown Allentown. Tickets for all three games at PPL Center this week are available now by clicking HERE.

The top seed in the Atlantic Division portion of the 2018 Calder Cup Playoffs, Lehigh Valley opened its playoff run by eliminating the fourth-seeded Providence Bruins in four games (3-1) before ousting the third-seeded Charlotte Checkers in five games (4-1) in the Atlantic Division Finals. Meanwhile, Toronto (54-18-2-2, 112 pts. during the regular season, 9-2 in 2018 Calder Cup Playoffs) earned the top seed in the North Division and eliminated the fourth-seeded Utica Comets in five games (3-2) before sweeping the second-seeded Syracuse Crunch (4-0) in the North Division Finals. 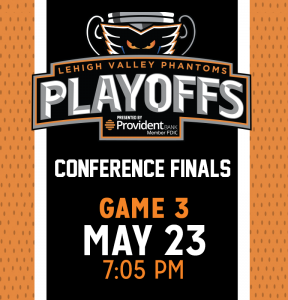 As the highest seed in the 2018 Calder Cup Playoffs, Toronto earned home-ice advantage throughout the postseason and opened the Eastern Conference Finals with back-to-back games at Ricoh Coliseum. The Marlies claimed a back-and-forth Game 1 with a 4-3 regulation win before outlasting the Phantoms 3-2 in overtime in a thrilling, fast-paced Game 2. Toronto is now a perfect 7-0 at home this postseason.

The Eastern Conference Finals pits the top two teams in the entire 30-team American Hockey League against one another. The Marlies finished the 2017-18 regular season with a league-leading 112 standings points while the Phantoms were second with 104. What’s more, Toronto paced the AHL with 54 wins this year while Lehigh Valley was second with 47 victories. No team in the AHL won more home games this season than the Phantoms (27) while no AHL club had more road victories this year than the Marlies (30). 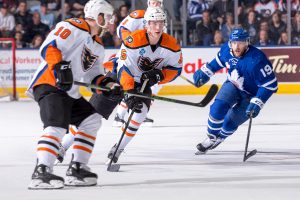 Phil Myers tallied a goal and an assist while Chris Conner (5th) and Tyrell Goulbourne (2nd) also found the back of the net for Lehigh Valley but the Toronto Marlies were able to prevail with a 4-3 regulation decision in Game 1 of the Eastern Conference Finals. Alex Lyon turned in a strong 28-save performance between the pipes for Lehigh Valley as the second-year netminder was handed just his second setback of the postseason.

Miro Aaltonen (2nd, 3rd) scored twice for the Marlies while Andreas Johnsson chipped in a pair of assists in front of Toronto goaltender Garret Sparks who earned his seventh victory of the playoffs after denying 26 of Lehigh Valley’s 29 total shots on goal. 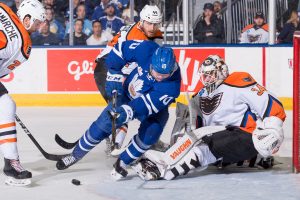 Mark Friedman (2nd) and Mikhail Vorobyev (1st) both scored in regulation for the Phantoms but it was Miro Aaltonen’s conversion 10:59 into overtime that tipped a fast-paced, thrilling 3-2 contest in favor of the Toronto Marlies in Game 2 of the Eastern Conference Finals. With the win, Toronto opened up a 2-0 lead in the best-of-seven series as the Marlies claimed their seventh straight home victory in the 2018 Calder Cup Playoffs.

Trevor Moore (4th) and Carl Grundstrom (5th) also found the back of the net for Toronto as Lehigh Valley’s Alex Lyon turned in another sparkling performance between the pipes turning aside 44 of the Marlies’ 47 total shots.