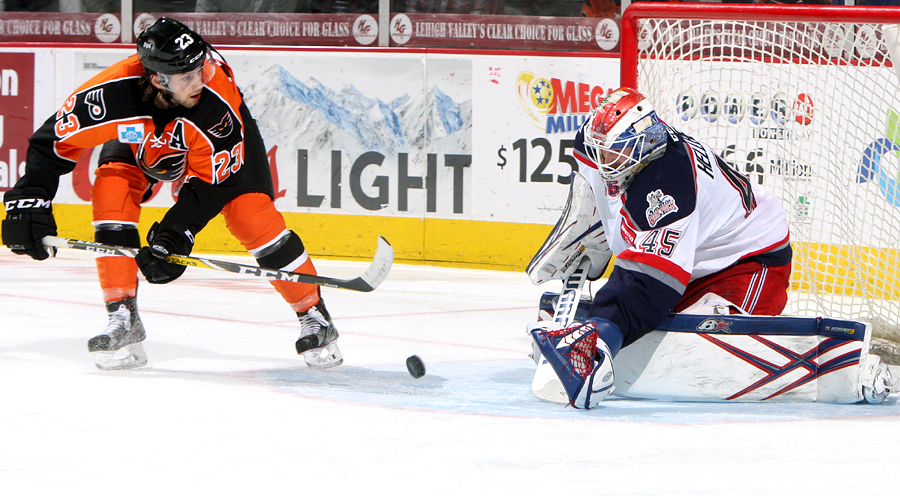 Lehigh Valley, PA – Danick Martel (19th) and Colin McDonald (11th) connected for the Lehigh Valley Phantoms Friday evening as another third-period comeback by the Phantoms produced a critical standings point in a 3-2 shootout decision with the Hartford Wolf Pack in front of 8,429 fans at PPL Center. Friday’s contest marked the third consecutive game in which Lehigh Valley has erased a third-period deficit as the Phantoms moved their point streak to four straight games (2-0-2). With Friday’s decision, Lehigh Valley has now garnered at least one standings point in 10 of its last 14 games overall (8-4-2). 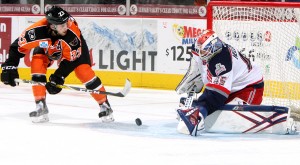 Martel added to his team-leading goal total with his 19th conversion of the year. The first-year winger is now tied for second among all AHL rookies in goals. Meanwhile, McDonald converted a game-tying power play marker in the third period as the Phantoms’ man-advantage connected for the fourth straight contest. Lehigh Valley’s power play is now 6-for-23 during its recent surge and has produced 19 man-advantage markers over the club’s last 14 games.

Making his fifth straight start between the pipes, All-Star goaltender Anthony Stolarz turned in a phenomenal performance with 36 saves on 38 Wolf Pack shots. The second-year netminder has now registered at least 34 saves in three of his last four appearances.

Hartford’s Magnus Hellberg earned the victory in goal for the Wolf Pack with 35 total saves while Nick Tarnasky (13th) and Travis Oleksuk (7th) converted in regulation time before Nicklas Jensen and Brian Gibbons sealed the contest in the shootout. 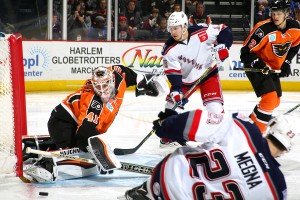 The Phantoms opened the the scoring with just over a minute left in the first period when a centering pass by Davis Drewiske on the right wing produced a rebound off the left pad of Magnus Hellberg that was promptly punched in by Martel. Aaron Palushaj garnered the secondary assist on Martel’s team-leading 19th goal of the season – a five-on-five conversion netted 18:45 into the first frame.

Hartford leveled the contest just over five minutes into the second stanza when a takeaway behind the Lehigh Valley net by Shawn O’Donnell produced a two-on-one atop the goal crease between Chris McCarthy and Tarnasky resulting in Tarnasky’s 13th goal of the year. McCarthy and O’Donnell assisted on the even-strength equalizer netted 5:23 into the middle period.

The Wolf Pack then grabbed their first lead of the night just a minute and a half into the third period when, while on the power play, Mat Bodie’s snap shot from the point was expertly redirected by Oleksuk in the slot for his seventh goal of the season. Jensen collected the second assist on the man-advantage marker scored 1:28 into the final frame.

The Phantoms evened the rivalry tilt with a power play goal of their own though. Fresh off a fight between Taylor Leier and Hartford’s Ryan Bourque that resulted in an extra roughing minor against the Wolf Pack captain, Conner dished off a beautiful pass from the slot to a wide-open McDonald on the right wing who promptly snapped home his 11th goal of the year. Petr Straka, now with six assists over his last four games, collected the secondary helper on the man-advantage marker poured in 10:11 into the third period.

Neither side was able to convert in overtime and so the game proceeded to a shootout where Jensen and Gibbons were able to convert for Hartford while Leier and Straka were denied by Hellberg.

The Phantoms are back in action tomorrow, Saturday, February 27 when they welcome the Utica Comets, the AHL affiliate of the Vancouver Canucks, to PPL Center. Saturday’s game is meLVin’s Birthday Bash where a host of area mascots will be on hand to help celebrate the birthday of the coolest mascot on ice! A limited number of tickets remain for Saturday’s game so be sure to secure yours now at pplcenter.com, by calling 610-347-TIXX [8499] or in person at the Mealey’s Furniture Box Office at PPL Center [701 Hamilton Street].