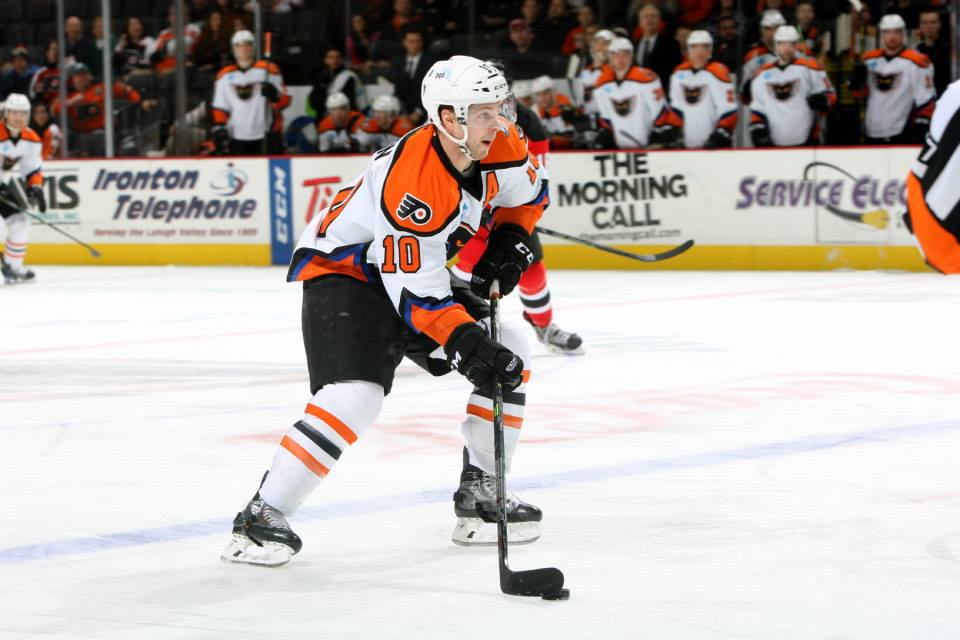 Phantoms Take Down Falcons for Another 5-4 Win

Springfield, MA – Andrew Gordon wanted to take care of matters early in overtime. With a nifty poke-check from a defenseman at the Phantoms line, the veteran winger created his own breakaway for a game-winning backhand goal just 24 seconds in overtime for another 5-4 decision at the Springfield Falcons.

Zack Stortini scored a pair of goals for the Phantoms for his first ever 10-goal campaign of his career. Taylor Leier had a goal (13th) and assist while he celebrated his 21st birthday. And Jason Akeson’s 15th of the season ran his recent red-hot stretch to seven goals in his last seven games.

Scott Laughton assisted on Taylor Leier’s goal. It was Laughton’s first game back with Lehigh Valley since November 15 before the first-round selection of the Flyers in 2012 was recalled by Philadelphia.

Lehigh Valley’s last three victories, all on the road, have been by identical 5-4 margins and all have been decided after regulation with a pair of overtime wins and one shootout victory. The Phantoms won last Sunday at Hershey with a Kevin Goumas overtime strike and also won Saturday at Wilkes-Barre in a shootout on Taylor Leier’s fourth-round lamplighter.

With their second consecutive dramatic road victory coming in their 50th game of the season, the Phantoms moved into 10th place in the Eastern Conference and pulled to within four points of the Providence Bruins who hold the eighth-place position. Just 26 games remain for Lehigh Valley over the last two months of the 2014-15 regular season.

The Phantoms improved to 24-21-5 for 53 points and now sport a rather impressive road record of 8-3-0 in 2015. Lehigh Valley is 9-5 in games not decided at the end of regulation which includes a 5-4 mark in overtimes and a 4-1 record in shootouts.

Andrew Gordon is the fifth Phantoms to strike with an overtime winner this season, four of which have come on the road. Other Phantoms overtime goal scorers this season include Brandon Manning (October 17 vs. Adirondack), Scott Laughton (October 25 at Binghamton), Nick Cousins (January 2 at Norfolk) and Kevin Goumas (February 8 at Hershey).

The Phantoms held a 4-2 lead after two periods but were running on fumes in the final minutes of their third game in three days allowing the surging Falcons to rally for the third-period comeback.

The fun got started early in the Phantoms lone sojourn to snowy Western Massachusetts this season. Zack Stortini dropped the gloves with Thomas Larkin just 57 seconds into the game to open the festivities. That also included a Stortini tripping penalty that precipiated the fight which was one of four straight power plays in the game’s opening 12 minutes that were afforded the host Falcons.

In between Lehigh Valley’s four consecutive successful penalty kills, Taylor Leier would strike from the left circle for his 13th of the season and second of the weekend on a Laughton win of the puck from behind the goal. The Phantoms enjoyed a 1-0 margin at the first break.

Domenic Monardo’s ninth of the season came early in the second period on a deflected point shot to tie the score at 1-1.

But less than 90 seconds later it would be Jason Akeson carrying to the top of the left circle and finding a perfect opening around a couple defenseman to let fly his wrister for his 15th of the season. And only 81 seconds later, Brandon Manning’s slapper of the end-boards bounding back out in front would cause chaos in the Springfield slot allowing Stortini to jam home his first of the night and give the Phantoms a 3-1 lead.

T.J. Tynan converted on yet another power play for Springfield at 11:48 of the second period as the scrappy rookie center’s sixth of the season pulled the Falcons to within a goal again at 3-2.

A speedy surge of second-stanza strikes stopped successfully seventy-one seconds subsequently via Stortini’s second score from Springfield’s slot! His 10th of the season and second of the night came on a nice drive up the right wing by Austin Fyten whose centering pass for Jay Rosehill resulted in a fine kick save by Falcons netminder Oskar Dansk but Stortini was there to jam in another crease-scramble goal to push the Phantoms up 4-2 at the second break.

Stortini would later almost secure the hat trick when he raced up with Nick Cousins in the third period during a 2-on-1. But Stortini’s drive for the far post from the left circle that beat Dansk to the glove-side would hit off the underside of the cross-bar and barely bounce to the wrong side of the goal-line.

Springfield rallied in the third with a majority of the energy. Luke Adam’s top-shelf blast in the opening minutes brought the Falcons’ deficit to one again. And just after a power-play expired and right after a Yann Sauve shot off the pipe, Jamie Sifers would even the score with a left-point blast with 6:06 remaining in the third.

The Phantoms would hang on to the end of regulation to force the overtime and then quickly ended matters in the extra period on the Andrew Gordon breakaway goal which was the only shot for either team in the OT and was his 15th tally of the season.

The Phantoms return to PPL Center for three straight home games in four days next week with contests Wednesday, Friday and Saturday. Wednesday’s rematch against the Binghamton Senators features $2 Draft Beer specials through the first intermission. Friday’s game will be the lone Allentown appearance for the Providence Bruins. Saturday night against the Hartford Wolf Pack is Legends Night with Frank “The Animal” Bialowas when the Phantoms host the New York Rangers affiliate for the final time this season.

Tickets are available at the Mealey’s Furniture Box Office inside PPL Center or at PPLCenter.com or by calling 610-347-TIXX (8499).