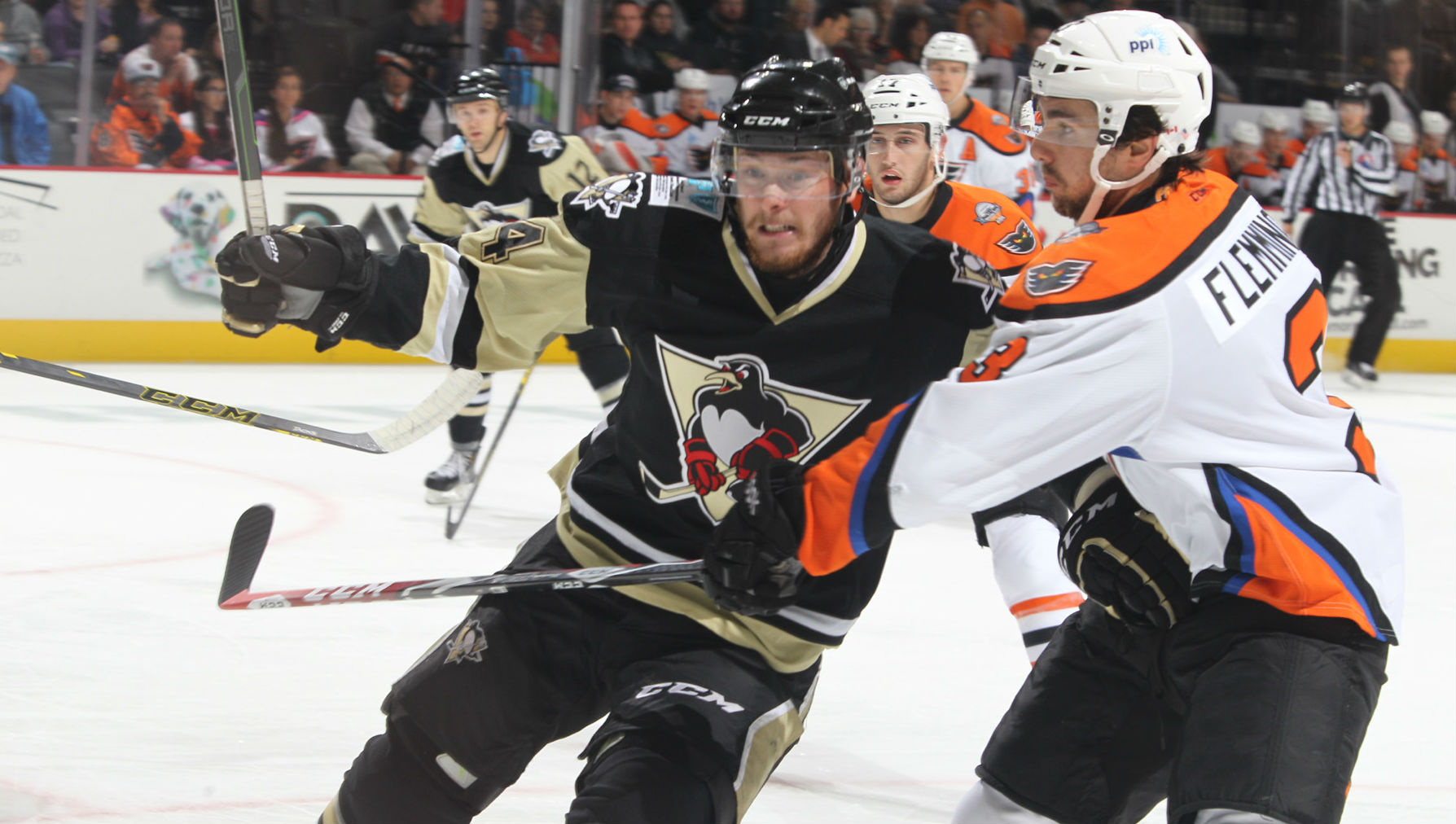 Wilkes-Barre, PA – The Lehigh Valley Phantoms played game four of their 12-game rivalry series against the Wilkes-Barre/Scranton Penguins on Friday night with the host Penguins taking a 5-1 decision to improve their strong-hold on first-place in the East Division. Brett Hextall scored his first career goal in the Flyers organization.

The Penguins were led by a pair of goals from veteran captain Tom Kostopolus and a strong performance in net from Jeff Zatkoff.

Rob Zepp returned to action for Lehigh Valley following about a week on the sidelines from an injury during pregame warm-ups on November 26. But the veteran goalie would not last to the end of the game as he would make way for Anthony Stolarz in the second period after Wilkes-Barre scored their fourth of the night.

The good news for the Phantoms; there isn’t much time to stew on this result as the team gets right back to action on their home ice on Saturday against the Bridgeport Sound Tigers. And next Saturday will be Lehigh Valley’s chance to avenge this specific setback when the Penguins arrive to PPL Center for Game Five of the rivalry series.

As Wilkes-Barre/Scranton raced out to a 2-0 advantage in the first period on goals by Tom Kuhnackl and Tom Kostopolous, the game took on a decidedly chippy tone with the Phantoms trying to ramp up the intensity level in their comeback efforts. Zack Stortini was called for an elbowing penalty in retribution of a hit Pierre-Luc Leblond had just delivered on Blair Jones at the Phantoms bench. The two well-known tough guys have been well-acquainted in previous seasons. Shortly after the penalty call, Jay Rosehill was tagged with a 10-misconduct for arguing with the officials as Lehigh Valley also let its frustrations show.

Lehigh Valley was able to kill a 5-on-3 late in the first period and early into the second period but the time shorthanded had paid its toll and it was just three seconds into even-strength hockey that Kostopolous would bury his second of the night for a 3-0 score.

Just past the midway mark of the game, Conor Sheary blasted a one-timer from the backdoor in the right circle on a cross-feed to beat Zepp on the glove-side and extend the advantage to 4-0. Exit Zepp and enter rookie Anthony Stolarz who made a number of impressive stops including a spectacular diving glove-save to his right to deny Josh Archibald on a 3-on-1.

The Phantoms picked up the play in the third period and generated better chances at Zatkoff. Brett Hextall picked up the rebound of an Austin Fyten baseball-bat style swing in the slot and was able to deposit his first of the season and his 28th all-time in the American Hockey League which includes three seasons with the Portland Pirates. Petr Straka pushed the puck up along the left-wing boards into the zone to create the scoring opportunity and receive credit for the secondary assist.

Just a minute later, a rebound found the stick of Jay Rosehill in the slot who nudged through Zatkoff dribbling off the base of the right post. In fact, the red light behind the goal had actually lit on the play but the puck indicative of how close the Phantoms were to making it a two-goal game.

Rookie D-Man Derek Pouliot knifed his way to the right circle and then cut to the slot to conclude the scoring on the only goal Stolarz would allow on the night.

The Phantoms were a perfect 7-for-7 on the penalty kill while going 0-for-3 on the power play. Wilkes-Barre/Scranton out shot Lehigh Valley 33-22 in the game.

The Phantoms are back in action at PPL Center this Saturday for a 7:05 PM clash with the Bridgeport Sound Tigers. History will be made this Saturday as the Phantoms host their first Teddy Bear Toss in Lehigh Valley. Presented by Dan’s Camera City, the Teddy Bear Toss encourages fans to bring new or gently used teddy bears to the game and throw them on the ice when the Phantoms score their first goal. All bears will then be donated to Valley Youth House.

Saturday’s game is also the first Legends Night of the year as two-time Stanley Cup champion, Hockey Hall of Famer and the first head coach in Phantoms history, Bill Barber, will be at the game signing autographs from 6:00 – 6:45 PM behind Section 112. In conjunction with Legends Night, all fans in attendance will receive a FREE Collector’s Edition Poster spotlighting Barber. Tickets for Saturday’s highly-anticipated match-up are available now at the Mealey’s Furniture Box Office at PPL Center (701 Hamilton) by calling 610-347-TIXX (8499) or online at pplcenter.com.

Lehigh Valley travels to Bridgeport for the rematch in Sunday matinee at 3:00 from Webster Bank Arena.