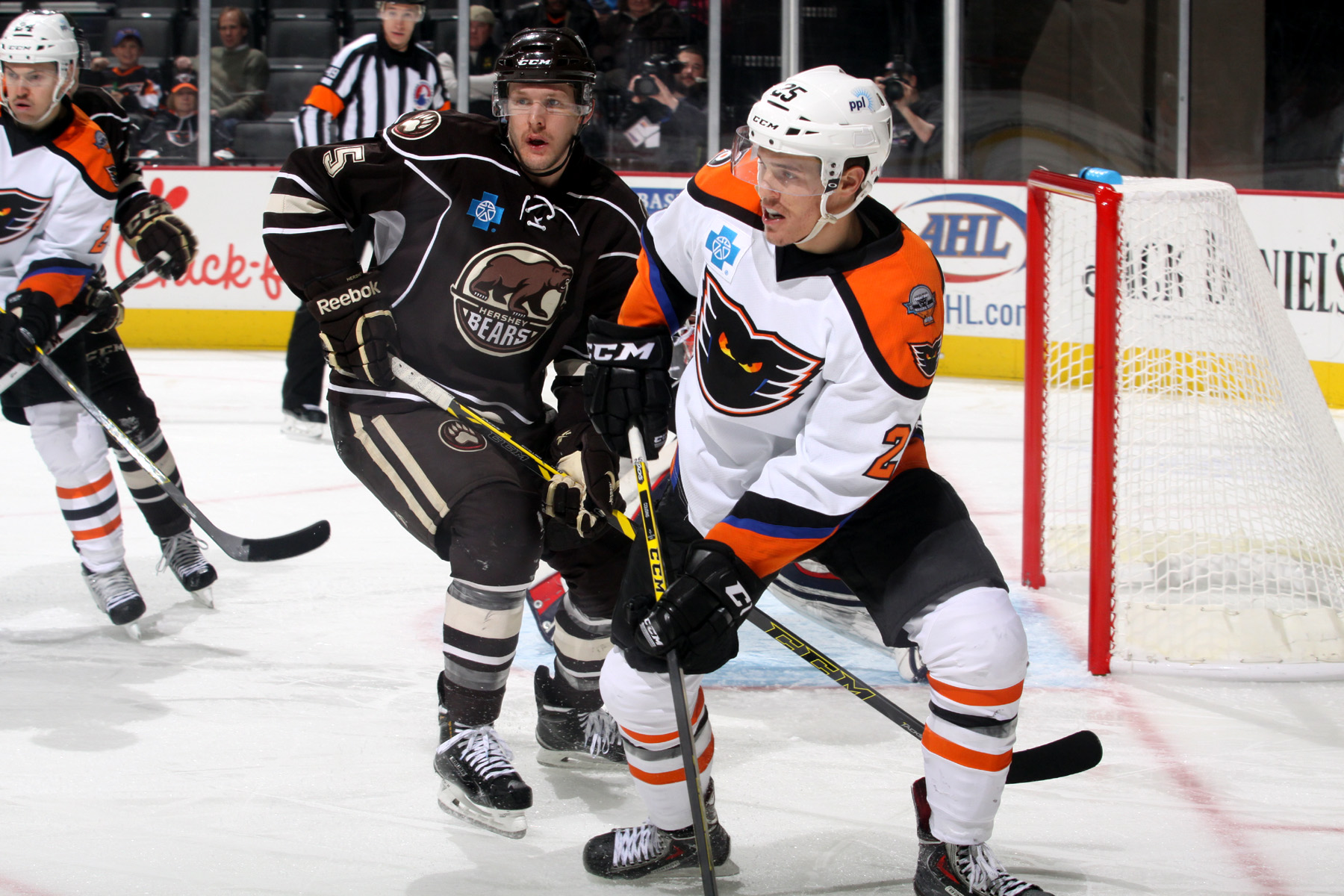 Hershey, PA – The Lehigh Valley Phantoms and Hershey Bears unloaded all their pent-up energies following a week-long holiday break in a fight-filled contest at Giant Center on Friday night. After four fights and other various scraps, Hershey eventually rallied from behind for a 4-2 decision.

The result ends Lehigh Valley’s five-game point-streak (3-0-2) and denied the Phantoms the opportunity to leap-frog the Bears in the East Division and Eastern Conference standings.

Two Phantoms players left with injury during the game. Defenseman Mark Alt crashed out into the end boards late in the second period on a hit by Hershey’s Garrett Mitchell. And goalie Anthony Stolarz was contacted by onrushing Chris Brown knocking his head into the post. The status of both players’ injuries will not be known until further evaluation.

Martin Ouellette came on for some relief duty in a tie game just two minutes into the third period and played extremely well but Hershey finally was able to break the deadlock with five minutes remaining and then tack on an empty-netter at the end.

Amidst 11 tremendous saves for Stolarz in the first period including multiple point-blank stops. the Phantoms were able to draw first blood and carry a 1-0 lead to the intermission. Jason Akeson from behind the goal neatly fired a centering pass into the slot for Blair Jones to bury his one-timer over the left shoulder of Hershey goaltender Philip Grubauer at 5:08 into the game. Jones’ tally was also assisted by Oliver Lauridsen.

The first period also saw the first of four different glove-dropping encounters on the evening as Steven Delisle went up against Chris Brown and later Oliver Lauridsen sought out Dane Byers following a huge check by the Bears’ captain against Lehigh Valley’s Taylor Leier.

Garrett Mitchell for the Bears on the back-door with a wide-open net was denied on a spectacular block with the stick by Austin Fyten to preserve the lead as well.

Stolarz had a 32-save shutout against the Bears last Friday in a 2-0 win at PPL Center and seemed to pick up where he left off but eventually Tim Kennedy on a sharp-angle open-net opportunity clanged one off the post. The carom found Chris Conner in the slot who was finally able to solve the Stolarz puzzle and get the Bears out of the drought at 13:26 of the second period.

The 1-1 deadlock lasted only about a minute-and-a-half. Veteran Jay Rosehill pulled off a terrific steal sneaking in from the corner and was able to knock the puck through Grubauer from the slot for a terrific tally to celebrate his first goal in a Phantoms jersey.

Derek Mathers dropped the gloves with Hershey’s Liam O’Brien in that period as the fisticuffs continued. The Phantoms led 2-1 at the second intermission but were up against it to begin the third period.

Mark Alt was called for a delay of game penalty with 33 seconds remaining in the second period when he was injured and landed on top of the puck behind the Lehigh Valley goal. And then Brandon Manning was tagged for unsportsmanlike infraction after the second period ended thus giving Hershey 1:27 of 5-on-3 carry-over power-play time to open the third.

The Phantoms battled through the 5-on-3 but shortly after play returned to 5-on-4, Stan Galiev cranked up a slapper from the left-circle that beat Stolarz and evened the game at 2-2.

It was just mere seconds later that Stolarz was konked into the post and removed from the game with an apparent head injury. University of Maine product Martin Ouellette entered AHL action for the second time this season and performed extremely well especially given the circumstances. The call-up from the Reading Royals of the ECHL just took over where Stolarz left off but eventually was beaten on a cross-ice pass to defenseman Cameron Schillin who had snuck his way up to the left of the cage to slam in the back-door give across by Chandler Stephensobn with 4:02 remaining in the third.

Casey Wellman’s interception at the Phantoms line somehow banked right off his stick and rolled into the empty-net with 47 seconds remaining to seal the win.

Former Hershey Bear Brett Flemming took on Connor Carrick in the third period for the fourth fight of the night in a battle of undersized defensman.

Lehigh Valley leads the season series over Hershey 3-2. The home team has won every game of the rivalry series so far. The Phantoms return to Hershey on January 18 and the Bears will next visit PPL Center on January 21.

Next up for the Phantoms is the team’s last home game for almost three weeks. The Norfolk Admirals arrive for a Saturday night tilt on Player Photograph Night with fans allowed to go onto the ice after the game to meet the players and take their own selfies with their favorite Phantoms! Standing Room tickets are available at PPLCenter.com or by calling 610-347-TIXX or at the Mealey’s Furniture Box Office at the Tim Horton’s entrance of PPL Center.

Group rates are the best way to enjoy Lehigh Valley Phantoms games. Don’t forget to ask about our luxury suites including the BSI Ice-Level Party Suite down on the floor where the players enter and leave the ice. Call the Phantoms to find out more at 610-224-GOAL (4625).