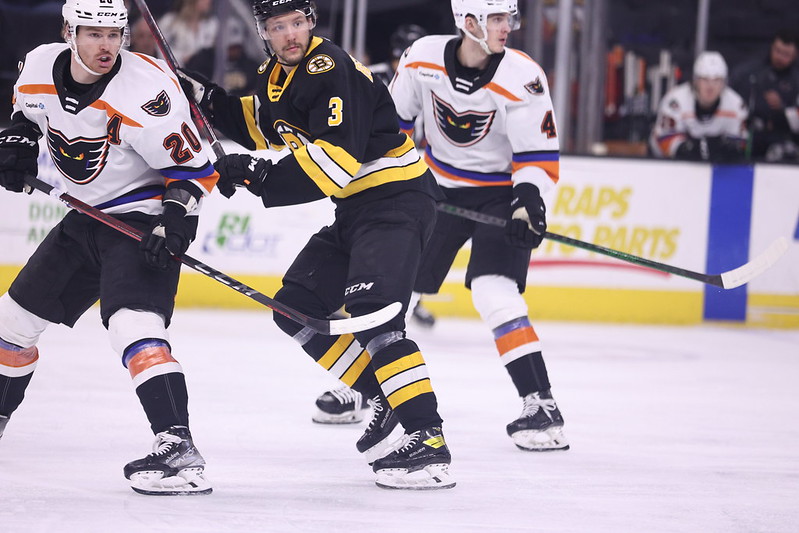 Providence, RI – Lehigh Valley again poured on a heavy attack at a veteran goalie but had a tough time finding the back of the net as the Providence Bruins secured a 2-1 victory over the Phantoms on Monday night at Dunkin’ Donuts Center.

Maksim Sushko (8th) scored off a faceoff win early in the second period but the Phantoms were unable to convert any more of their 32 total shots into goals against Troy Grosenick who entered the contest as the top goalie in the league.

Lehigh Valley had its chances all the way to the finish. Adam Clendening’s shot in the closing seconds rebounded out to Wade Allison at the blue line for one final chance. Allison’s drive with five seconds left made it through the traffic and appeared to catch Grosenick perhaps struggling to find it. But the shot hit off the left shoulder of the Providence goalie for his final save of the game to finish the win.

Lehigh Valley’s chances also included six power plays in the game with four of them coming in the first period. But the Providence penalty kill, rated second-best in the conference, impeded the recently surging man-advantage attack of the Phantoms. Cal O’Reilly offered a blast from the left circle off the post in the first period and the Phantoms had some other chances as well but couldn’t solve Grosenick.

Providence received a pair of goals from defensemen as Aaron Ness (3rd) and Viktor Berglund (6th) broke through against Pat Nagle.

Lehigh Valley had a four-minute power play in the opening seconds of the game on a double-minor for high sticking but the P-Bruins buckled down and made entries difficult for the Phantoms in Lehigh Valley’s initial power-play efforts.

The Phantoms poured on 15 shots in the first period, plus the post shot from O’Reilly, but Grosenick stopped them all.

Lehigh Valley broke through early in the second period on a faceoff win for Matt Strome. Maksim Suhsko was open at the net front to beat Grosenick for a 1-0 lead on a play also assisted by Isaac Ratcliffe.

Providence answered back less than four minues later with veteran defenseman Aaron Ness sneaking in from the point to hammer home a one-timer past Nagle from the high slot to forge a 1-1 tie. Ness and Nagle had recently been teammates on the U.S. Olympics team that competed in Beijing, China.

The Bruins scored the decisive goal just 19 seconds into the third period on Berglund’s power-play point shot that squeaked past the right skate of Nagle and into the net.

The Phantoms carried the play in the third period with a 10-3 shots advantage. There were a couple tries in traffic at the net-front for Garrett Wilson and also a sharp-angle effort for Max Willman from the right of the cage that just missed the corner. Wade Allison had the bid at the very end. But despite the Bruins being outplayed for the final frame, the Phantoms couldn’t find the equalizer.

The Lehigh Valley Phantoms open a three-game homestand on Wednesday night hosting the rival Hershey Bears at PPL Center. The stretch of Allentown engagements continues Friday evening against the Bridgeport Islanders and also Saturday night against the Providence Bruins again on Pride Night co-hosted with our friends at the Bradbury-Sullivan LGBT Community Center of Allentown.