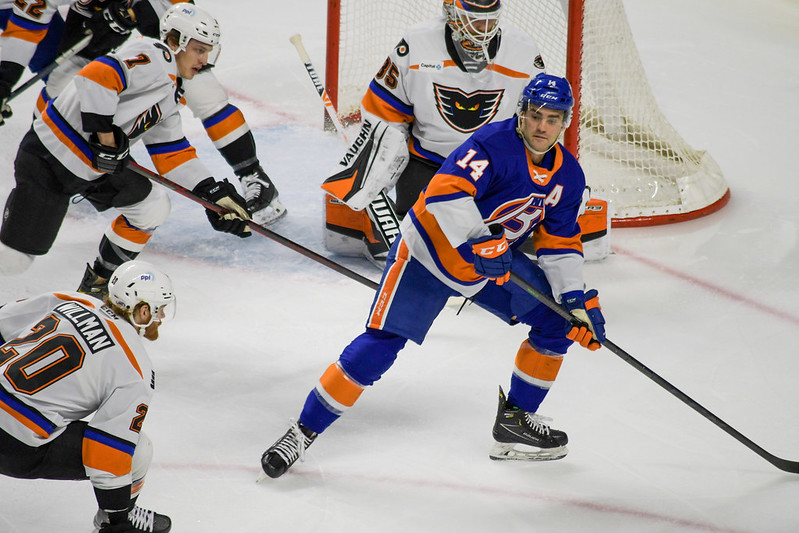 Bridgeport, CT – Isaac Ratcliffe scored a pair of goals, including the game-winner with 4:00 remaining, and the Phantoms completed a perfect 3-for-3 weekend with a 4-3 victory at the Brigdport Islanders on Sunday evening. It was Ratcliffe’s first two-goal game as a pro and gave him a new personal-best eight goals this season.

Pat Nagle made 28 saves which included 16 straight in the first period when he was challenged the most on an early flurry of opportunities for the Islanders.

The Islanders battled back from one-goal deficits to tie the score three different times but Lehigh Valley held off their bid for a fourth equalizer and hung on for the win.

The Phantoms won three straight games over the weekend including Friday and Saturday triumphs at PPL Center against Wilkes-Barre/Scranton and Utica. In all three games, the Phantoms were slow out of the gates. Bridgeport outshot the Phantoms 16-5 in the first period but Pat Nagle came up with several challenging denials to keep the game 0-0.

It was an especially impressive game for Ratcliffe in his first-ever multi-goal game as a pro. He took a shot block off the hand and was also slashed on the hand. But after a quick ice-pack to each the pain while still on the bench, Ratcliffe would get back out there. Shortly thereafter, he screened the Bridgeport goalie for the Phantoms’ first goal of the game before scoring two of his own.

Adam Johnson had been denied on a sparkling save by Jakub Skarek who reached up for a glove stop while diving over on his belly. But a few minutes later, it was Johnson in the slot who got a piece of Clendening’s shot from center-point to put the Phantoms ahead 1-0 with 13:00 remaining in the second period. Ratcliffe screened Skarek on the play. Johnson’s third goal of the season was his second as a member of the Phantoms since coming over in a trade from  the Ontario (Cal.) Reign in January. The former Wilkes-Barre/Scranton standout had two other great chances to build on that total to continue a trend of the past few weeks in which the speedly winger has consistently created some of the team’s best scoring tries on an almost-nightly basis.

Collin Adams responded on the rebound of a Parker Wotherspoon shot on the rush after an intercept at center. Pat Nagle fought off the initial shot reaching up high with his blocker to punch it away. But the ricochet chance was too juicy for Adams (5th) who evened the score at 1-1 with 8:41 left in the second.

Lehigh Valley (25-27-11) was unable to convert on almost 1:30 of 5-on-3 but shortly after the Islanders received one of their players back it would be another center-point deflection goal for the Phantoms. This time Ratcliffe at the net-front got a piece of a shot from Brennan Menell’s drive to put the Phantoms ahead 2-1 with 2:49 left in the second. Cal O’Reilly slid the puck over to Menell to receive an assist on the play as well.

After being outshot badly in the first by a 16-5 margin, the Phantoms had taken charged and enjoyed a 21-9 shot advantage in a second period in which they benefitted from four power plays. Lehigh Valley was outshot 10-1 in the first 11 minutes of the game but would go on to outshoot the Islanders 34-21 the rest of the way.

Bridgeport (27-27-10) rallied to tie the game again partway through the third period. Mitch Vande Sompel (2nd) rotated up to the left circle and when a shot found traffic in front resulting in a friendly carom his way he would bury his open shooting opportunity for the equalizer with 11:19 left in the third.

But the Phantoms would quickly retake the lead when Logan Day (5th) was ready to unload from the top of the right circle when a puck came bouncing across the slot to his direction. Day’s blast went to the upper-far corner on the stick side of Skarek with assists for Tanner Laczynski and Adam Johnson on the only even-strength goal the Phantoms would score on the day.

Bridgeport would tie the score for a third time a few minutes later. Adam Johnson was denied on a shorthanded breakaway with his shot catching part of the helmet of Skarek. The officials allowed play to continue leading to Chris Terry’s bomb from the right circle just a few seconds later to make it 3-3 with 8:32 left.

Max Willman took a long stretch pass from Clendening and was racing up on the breakaway when he was held by Paul LaDue. The third power-play conversion would be the winner when Ratcliffe deflected a shot past Skarek. This time it was an O’Reilly drive from the left dot for Ratcliffe to get a piece from the left of the cage with just 4:00 left for the eventual game-winner.

The Phantoms take their three-game win streak to Wilkes-Barre for another rivalry clash with the Penguins on Wednesday night.

The Phantoms return to PPL Center on Friday night hosting the Hershey Bears.